This is that unusual topic which allows me to indulge my passion for football, and, well, the passion that got me my day job teaching 19th century American literature.

If you are lucky enough to visit White Hart Lane on match day, you might hear the Tottenham fans chant "Glory, Glory Tottenham Hotspur", to the tune of the song popularly known as "The Battle Hymn of the Republic".

This is a patriotic American song - the sort of thing one hears sing over a loudspeaker at a fireworks display on July 4th, or belted out by a High School marching band around Thanksgiving. The Mormon Tabernacle Choir, for example, does a nice, sober version of this patriotic melody.

It was weird to hear Spurs fans rooting on their team with the music from this popular but staid American anthem. Almost as weird (and weirdly moving) as hearing Liverpool fans sing "You'll Never Walk Alone" - a song from the Rogers & Hammerstein musical Carousel - popularized by singers like Anita Bryant, Doris Day and Judy Garland (whose version is used here to animate a photomontage celebrating the fellowship of the ring!) - and let's not forget Jordan Sparks, who belted it out for American Idol. You have to understand: for those of us raised outside the UK, there's something fundamentally incongruous about the idea of Liverpool fans knowing the words to a song from Carousel.

Inspired by a song she'd heard Union soldiers sing, Julia Ward Howe wrote the lyrics for "The Battle Hymn of the Republic" in 1861. Many of you will know at least the first two lines of the opening stanza:

Mine eyes have seen the glory
Of the coming of the Lord;
He is trampling out the vintage
Where the grapes of wrath are stored;
He hath loosed the fateful lightning
Of His terrible swift sword;
His truth is marching on.

As loaded with images of God's wrath as it is, this is a neutral, 'cleaned' up version of the original song sung by Union soldiers marching into battle during the Civil War. Then it was known as "John Brown's Body" (also known as "John Brown's Song"). (PBS has a great web page with audio clips & text about its origin, and University of Virginia professor Franny Nudelman has written the book about this stuff.)

There are different versions of the song lyrics - but here's a simple one that gives you a sense of its peculiar, and peculiarly moving images:

"He captured Harper's Ferry with his nineteen men so true
He frightened old Virginia till she trembled through and through
They hung him for a traitor, themselves the traitor crew
His soul is marching on."

"Oh, soldiers of freedom, then strike while strike you may
The deathblow of oppression in a better time and way;
For the dawn of old John Brown was brightened into day,
And his truth is marching on."

The song became, as evidenced by the above lyrics, a popular vehicle for celebrating the story John Brown the abolitionist - a white man who was so opposed to slavery that he took up arms and led a raid on Harper's Ferry, a munitions facility - an arsenal, in fact. (No kidding!) His aim was to set an example with a successful raid that would lead to massive internal rebellion against the slave holding governments of the southern states. The raid failed, and John Brown and his comrades were hanged by the US government.

Amazing, then, that only a few years later soldiers fighting "to preserve the union" would honor a man executed by the government for trying to start a civil war. John Brown's story is one of the most fascinating in American history - it is, however, not often taught in schools. One can imagine why - because in telling that story, we find ourselves confronted by ugly truths about how violently the United States committed itself to slavery, and for how long. From this point in history, John Brown's raid looks like the right thing to do: But it raises the question as to why more people didn't throw their lot in with those held in bondage.

Today, he is largely remembered as a religious fanatic.

Anyway - it is without a doubt one of the all time great political songs - right up there with "Strange Fruit". Not in melodic beauty - JBB is mind numbing, relentlessly repetitive - thus a marching song well suited to Spurs fans who (and you know I love you) can't seem to do better than sing "Come On You Spurs" or "If You Hate Arsenal, Stand Up" - over and over again. "John Brown's Body" is up there with "Strange Fruit" as one of those songs that changed the world. It is a song with a crazy history - and it is a song about crazy history. Once you know who John Brown was, why he fought and why he was hanged, when you hear that music you can't but feel a certain crazy determination in your bones to just get out there and make something happen. Audere Est Facere indeed.

So, in the end, "John Brown's Body" has a meaning very similar to "You'll Never Walk Alone" - it means something like: Everyone else in the living world might think you are crazy - but we'll follow you even if it means following you to our graves, knowing that we have righteousness on our side as we do so. Especially if you are taking on Arsenal. 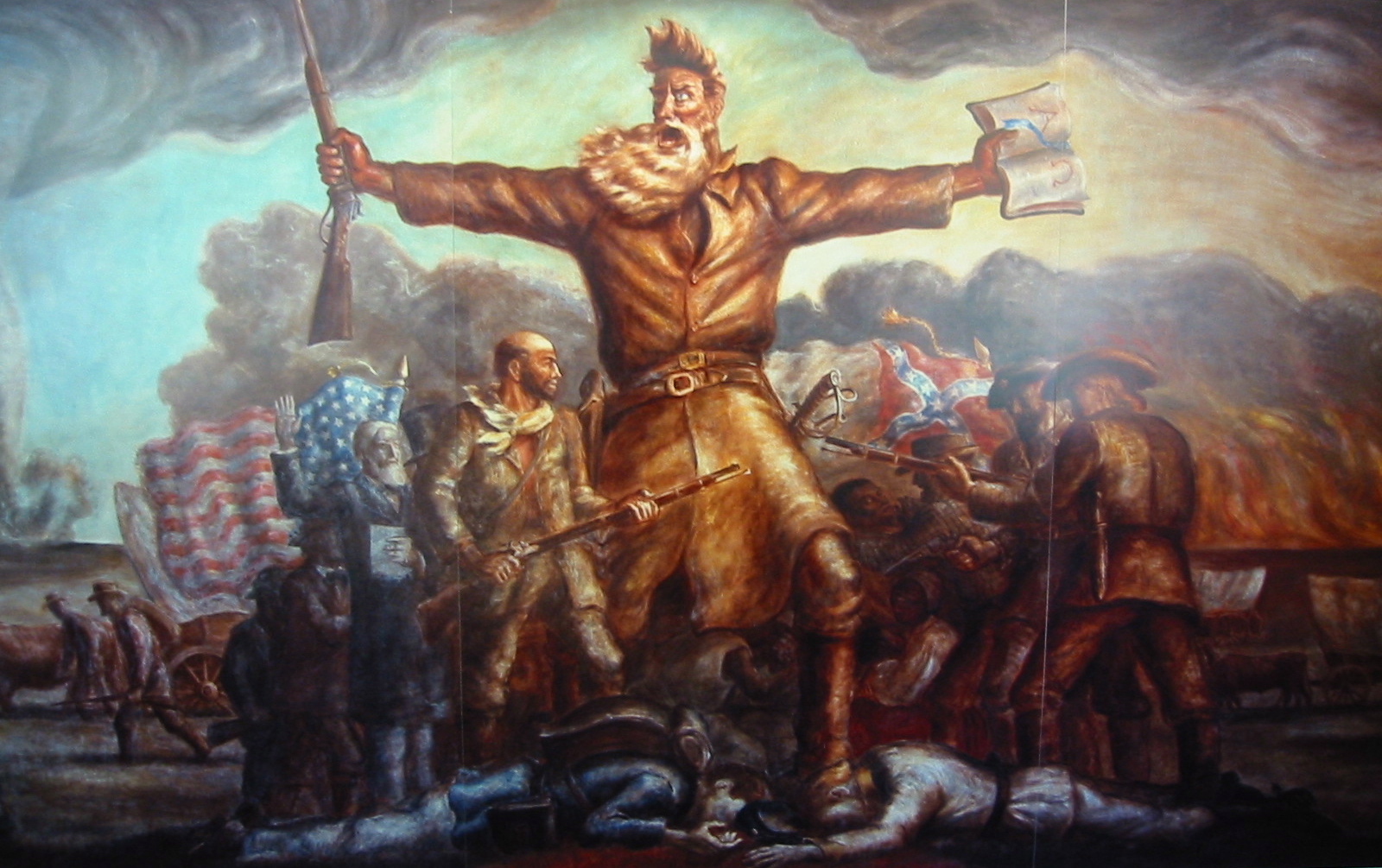 (note: John Steuart Curry's mural celebrating JB's role in the anti-slavery fight is the on the right - that'd be Brown with the Bible in one hand, gun in the other. And left: a more recent riff that gives you some sense of what a knot in Americana we have in Mr. Brown.)

Email ThisBlogThis!Share to TwitterShare to FacebookShare to Pinterest
Labels: music