There is oh so much to say about this.

I will confine my comments here to observe that the gentleman in the leather jacket is Günter Netzer, an early Ferrari-driving, nightclub owning popstar-footballer. One of his most fabled moments on the pitch arrived in the final for the 1973 German Cup. After a season of public power struggles with his manager, he announced a move to Real Madrid a week before this final game against Koln. The manager had him start the match on the bench. I am not sure I understand the details, but I think the manager tried to sub him in during the first half, and Netzer refused to go on the field. And then, during the second half, he shed his jacket, and said "I will go on now" and scored the winning goal. You can see that goal here, starting at about 2 minutes.

A friend of mine told me about Netzer and this incident in August, and, amazingly, we saw Netzer at an airport in Berlin just a few days after that conversation. I thought of asking him to autograph my copy of Moby Dick (the only thing I had in my hands that someone could sign, as it happens), but I didn't have a pen, don't speak German, and got shy.

Municipal de Fútbol is a unique combination of art, graphic design, and fútbol. Centered on Michael Wells's gorgeous photographs of amateur men's teams playing in leagues across East and South Los Angeles, the book explores the visual texture of fútbol angelino - the most popular sport in Los Angeles, and a defining aspect of LA culture lived below the radar of Anglo media. (Click here for photos of the whole thing.) For $80, you get a box containing two books of photographs (with essays by yours truly), a set of five artists prints, a fold-out poster of an LA amateur team, and - incredibly, an Adidas jersey for a European national team. $80 is a lot, but given all that you get for that, it's really a steal. This is not your everyday soccer product. It's an awesome gift for the person in your life interested in grassroots football, and perhaps the best glimpse at football culture in the US that you'll find. It's fully bilingual, too.

2. A national team jersey with the name & number of a favorite female player.

A decent on-line sports store will let you customize a national team jersey, giving you the option of honoring your favorite footballing goddess. And while there is a certain poetry to wearing the US # 1 shirt with the name Solo emblazoned on the back, why not celebrate the international game? For example - a Brazil shirt with number 8/Formiga,11/Christiane, or 10/Marta. Nigeria's 4/Nkwocha, or 12/Uwak. Germany's 1/Angerer or 9/Prinz.

This is a great, original gift idea for fans of the women's game - for especially but not only younger players. Broadcast your love for Brazil, England, Nigeria, or Germany's football cultures, as well as your admiration for the women who represent these countries in international competition. 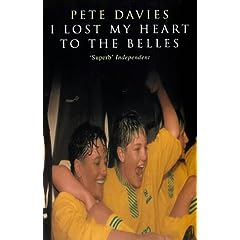 This is a must-read for fans of the game - and not just the women's game. Davies followed the Belles throughout the 1994-1995 season, when the team was just cresting their incredible run as the overwhelmingly dominant force in English women's football. It's a brilliantly written chronicle of a team's ups and downs, and remarkable for the portraits it offers of these largely working-class women training and playing (some on the English National Team) on their own time. It's great on the euphoria of a good win, on the psychological agony of injury, on the challenges of training and managing a team with next to nothing in terms of resources. Every amateur player no matter their gender can relate to these stories.

But there are elements to this story that are very specific to the issues faced by women in the UK. This season saw the fallout from a BBC broadcast of a controversial documentary about the Belles which portrayed them as foul-mouthed and "hard. " I haven't seen it, but something tells me the controversy caused by the documentary is related to the particular anxiety women footballers provoke - that playing the sport is unladylike, and that the sport is full of lesbians. Davies doesn't "out" players, but the book seems to me a loving portrait of a working-class lesbian community. If you are a lesbian reader, you are very likely to see lots of things tucked between the lines (the pubs the team frequents are clearly gay pubs, for example). And it's hard not to wonder if the FA's upset at the BBC documentary and their crappy treatment of Belles players wasn't homophobic. But none of that is addressed directly. Writing for the general reader, Davies negotiates this thorny terrain carefully.

I don't think he uses the word "lesbian" once in the whole book, even though it is really a memoir of butch-bonding - a sport writer palling around with a bunch of 'tomboys' for an entire season. You can feel throughout how deeply moved he was by his experience of getting to know the Belles - and I suspect that if he wasn't already a pretty enlightened guy, by the end of this experience he emerged with a deep respect for women, and for lesbians in particular.

Do you know a female player who is a fan of the English men's game, but knows nothing about what her sisters endure across the pond? Are you a female player and want to share what the women's game feels like with your brother, or dad? This is the book.

I don't think it is still in print, but Alibris sells used copies of it, and you can also find it on amazon.co.uk for next to nothing.

It doesn't matter what you think of Dunphy - this must be one of the most incredible examples of football literature out there. Originally published in 1979, this diary records Dunphy's thoughts while he played his last season with Millwall. The book contains some of the most wildly romantic writing about how great playing football feels when all goes well, and some of the most compellingly bleak prose you'll find about the misery of being a sub. It's an awesome read, and no memoir I've read can touch it.

I've praised this documentary before. This has to be one of the best sports documentaries about women athletes ever made. As much as I love Dare to Dream, the documentary about the USWNT, this is a much more complex portrait of C. Vivian Stringer - an already legendary figure in US university-level athletics - and the Rutgers University Women's Basketball Team.

I think I cried through at least half of it. This is a gift for the coach in your life, for the women you know who played college-anything, for fans of women's basketball, and for young women of color looking for role models in high-level athletics.

This is a love letter to the beautiful game written by an internationally renown Uruguyan writer. Written in very short "chapters", it is the kind of book you keep nearby for moments when you just need a pick-me-up. This is the gift you give to a guy/girl who loves the game, when you want to really get their attention. It is, quite possibly, the most beautifully written book about soccer - the book that captures most closely the nature of our affection for it.

This book is in print - it is widely read in Latin America - and readily available. This extraordinarily poetic book will rock the world of whomever you give it to.

A DVD edition of Helmuth Costard's amazing real-time portrait of George Best playing for Manchester United (in a match against Coventry). The perfect gift for the hard-core Man U fan with a wee bit of interest in film, art, or just George Best. (The film is hopelessly sexy!) This is plainly the inspiration for Douglas Gordon/Philippe Perano's Zidane film (which is itself available in Europe and I believe due for a release in the US.) Elsewhere, I've described Costard's portrait of Best as the film Andy Warhol would have made if he made a football movie.

I am not sure how to buy it without navigating German websites - here is a link to the DVD's page on its distributor site (this is how I bought it): Zweitausendeins

WARNING: This is only for those of you who can play/deal with DVDs in region 2.

This is for your hard core sports fan with a head for business. This book responds to how "fans of baseball, football, basketball and hockey have long been exploited and oppressed by the monopolistic practices of team owners." These two guys examine the economics of team sports globally to tease out the good and the bad in diverse sports systems. The book is really based, though, in their comparison of the international soccer system with American big league sports.

Learning from the lessons offered by both domains, they map out the ways that leagues and teams currently alienate and betray their fans - and propose a series of changes in the way leagues and teams are run. It sounds dry - but for the serious fan, this stuff is fascinating. I'm totally getting this for my accountant brother-in-law. It'll make any reader of it instant winner of late-night beer-fueled arguments about what's really fucked up with the MLS.

(This book is also my prescription for those knuckleheads who think that the US has the most profitable professional leagues in the world - the guys who can't imagine how anyone ever makes money off of soccer.)

This is not an autobiography. This is a book about how Mia Hamm, one of the greatest players the game's ever seen, plays the game. It's really meant for young players - but I must admit, I learned a lot about basic skills from reading it. It's totally useful. I am amazed that this isn't for sale in England - where the women's game is the fastest growing sport. This is a great gift for young players, and old women like myself who are just new to the game. It is very clearly written, and includes drills! Women fans of all ages will enjoy this - though this is not really appropriate for experienced players.

Murakami is one of the world's greatest living writers, and it turns out he's a marathon runner. This is a down-to-earth portrait of his relationship to long distance running. It is refreshing to read something so thoughtful about what sport means to a "regular" person (meaning the older, non-Olympic, amateur athlete). This is a fantastic book for the athlete in your life who loves to read. If they love to read, they probably know Murakami's novels and will be tickled to discover how much they have in common with him.
1 comment: Links to this post