Zidane, Corporate Robot?: From this month's "So Foot"

SO, I’m here in France – enjoying a self-imposed writers retreat, and loading up on French football writing. I came across this provocative interview in the April issue of the glossy magazine, So Foot. It’s with Abdel Raouf Dafri, the scriptwriter for La

Commune, a new series broadcast on Canal +. The interview was conducted by Simon Capelli Welter. It’s a fairly generic discussion of soccer & the disenfranchised – at the end, though, he makes some harsh statements about Zidane. I'd love to know more about this - I know Zidane presents himself apolitically, but Zidane gave Sarkozy his maillot (in 2006)?! That somehow hadn't made my radar screen. Say it ain't so Joe!

Anyway, I’m hoping the guys at So Foot don’t mind my unauthorized translation of the Dafri interview – it’s rocky – I may have taken some liberties, but I’m sure I’ve the basic points right.

SF: There’s something missing from La Commune, right? It’s about the banlieu, but there’s no football.

AD: Football is the least cinematic sport you can find. All football films are miserable flops. Football’s appeal is in the direct experience of emotion, it’s the suspense. In a film, the director shows you there is a good team, and a bad team – there’s no point. To make a story out of football, you have to look behind the scenes, at “how one makes a player”. I’d love to see a film with Cantona as a corrupt agent.

SF: Who would he represent?

AD: Tibéry – I mean Ribéry! I’d love to know how one makes a guy like Ribéry. A guy who comes from the streets. He grew up in Boulogne – really, a he’s a kid from the favelas.

SF: They say it’s like being an “immigré de l’interior” (roughly, a domestic immigrant - trans).

AD: Yes, that’s a lovely expression. You should check out Boulougne-sur-mer. I dare you to spend two weeks there. […They talk here about the relationship between regionalism & nationalism.] I’ve been [to places] where there are guys who don’t know the names of streets more two steps from their house. It’s crazy…You say to them – “Look – there are chances to get out, work [in other places] and they don’t want to go. They only want something two bus stops from their place, max. The reality in that region is grim. Economically, intellectually, in terms of artistic creation, it’s bleak.

AD: I have a theory: the cities that have some money have very mediocre football and in the poor cities, it’s a religion. [Hardly his theory alone! - trans] In Lens, the guys in the stadium are there for the love it. But, they don’t have anything else. In any case, I don’t really like stadiums, I don’t like crows and then…One night, I was DJing at Macumba (a club in the banlieu in Lille), we were asked to put the TF1 match on the club’s screen. I turned on the projector, and I saw some sort of massacre – I thought this isn’t the right channel. I switched channels, I couldn’t find the match, and I put the images of the slaughter back on. I went back to the music – funk, or something from that time. The images of the violence played on. It took us ten minutes before we realized that it was the right channel, and that the match had been interrupted by a fight. It was Heysel….

SF: That was Brussells, not to far from here….

AD: When they had World Cup in the US, we asked an American cop, the Dallas sheriff, what he thought of hooligans. “If they make a move, we’ll hang them by the collar like the wash.” [I think] There wasn’t a single incident. Hooligans know that if they get locked up in the US, it’ll be with gangs. And that’s no joke…. But in France, guys know that the cops are nothing [there’s that word “walou” again – trans]. During the World Cup in France, there was that cop killed by English hooligans in Lens [was he killed?? JD]. The problem was simple: the French cops looked at guys who looked like them – white hooligans — and they weren’t on their guard. A group of black guys would never have killed that cop. The cop would have pulled his gun. It’s usually the black supporters who see one of their own killed. Same in Heysel. The Belgian police really kept an eye on the Italians, because they’re dark – so they didn’t really put surveillance on the English. They just let them drink.

SF: What do you make of the whistling during La Marseillaise?

AD: It’s pathetic Those guys crack me up. They were born in France. I’m Maghreb (from North Africa), and at one time, I had to ask myself those questions. With these whistles come questions about French society. But we shouldn’t indulge in self-victimization! You have to get off your ass! Most of those guys are spending 150 euros on their sneakers – and they can’t buy a book for 20? Look, these guys from the hood, they make me look at things from a different angle. Today, you can’t get anywhere without an education. You think Barack Obama got where he is because he looks good in his Nikes? He went to Harvard! You have to teach, take care of yourself. And if the system doesn’t give you a chance, too bad – teach yourself. My parents were illiterate. I went to a technical school. In school, everybody came from the same background – the poorest. 90% were children of immigrants. From every direction, from the left and from the right, Arabs and Blacks are fucked. They go on about Rama Yade and Rachida Dati. You have to laugh. It’s like Condaleeza Rice – they say “she’s black”. No, she’s not black, she’s republican. Look at Rachida Dati, or Zidane - their power is about the present but not the future [une force sur le moment mais handicap pour la suite], it derives from the fact that they think of themselves only in terms of function and ambition. Really, we don’t know where they come from. Rachida Dati, she doesn't talk about her experiences as an Arab woman because she understands herself as a woman from the political right….Zidane – what has he done for other Africans? He became the world representative for Danone! It’s the brand speaking. Not him. In terms of being human – he doesn’t exist. Zidane – he’s Johnny Halliday! [I think this might be the most scandalous bit! - JD]

SF: You have to be apolitical and compliant in order to have universal appeal.

AD: You don’t give your shirt to Sarkozy when you are Zinedine Zidane. With Brice Hortefeux as the minister of immigration, his family would never have gotten into France, and we’d never have had Zidane. As an Arab, he has to ask himself some questions! His parents come here, speak French, work, build a respectable family, teach their kids values. Their son becomes the greatest player in the world and what does this son do when he retires? He gets on the payroll for Danone?....I’d love see for the record his political position. 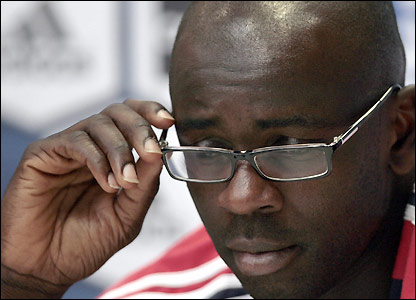 SF: Thuram [adoring sigh from me - JD] isn’t afraid of positioning himself.

AD: He’s doing the right thing, even if it's sometimes awkward. Karembeu too, when he addresses his roots as a Kanak. I have to give respect to the guy who doesn’t forget where he’s from. I can’t say where Zidane comes from. For all I know he’s a digital hallucination. You don’t know if he’s even real, you don’t know what he thinks about. Except how to appeal to as many as possible. That’s not how it works. You can’t appeal to everybody – you choose a camp. We are staring down some huge problems in this world, and you have to take a position on them. With these guys who come to have so much influence and then don’t do anything with it, you can be sure you know why they are there: “I just want the dough, I don’t want any trouble, so I’m not going to rock the boat.”

Note: I have my own take on this interview - on the contradictory threads in his rambling about how one needs to pull oneself up by one's bootstraps et al. But I thought these comments were great to share with those outside France, where it may come as a surprise that Zidane as seen as super vanilla.