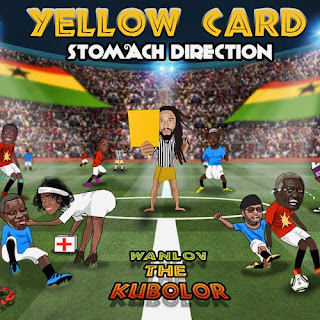 Wanlov the Kubulor produced Yellow Card in honor of the World Cup - it is, start to finish, a joy. This is my favorite World Cup related music - it's actually a concept album that lives up to the complexity of its idea.  Wanlov hails from Ghana (he was born in Romania & lived for a bit in the US), Yellow Card follows Green Card - and in the move from one to the other, I think you get a sense of the connections he makes. He calls his style/practice/philosophy "Pidgin music" - it's a hybrid of contemporary Ghanaian scenes. This album is clearly inspired by the texture of the everyday intersections of music and football in his home country. Yellow Card manages to be both upbeat and grouchy - the music of a passionate and beleaguered fan. "Goal Again" appears in the background to the "Obama We Are Sorry" World Cup celebration video I posted a couple weeks ago, and I just had to track it down.  I thought I'd share it with you all. Be prepared to move.


I believe you can download the album, legally, here. Wanlov the Kubolor has been giving this music away - but check out 2007's Green Card, too, which he sells on itunes.
2 comments:

Why We Fight (for real sports coverage) 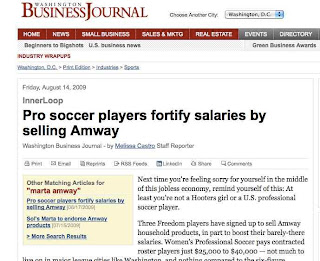 Fans like yours truly want sports writers to sink their nasty little teeth into better topics than irrelevant fights between amateur players, playing in matches that matter to no one but those teams and their campuses.

We would like: Nasty rants about the shit refereeing in the women's college game (because that matters nationally). Cynical swipes at Marta's Amway deal. Follow up on rumors that players have been selling Amway to make up for their crap salaries, and let's hear more about that agent of Marta's while we are looking at the business side of things. How about some paranoid writing about the UNC-Chapel Hill cult. Let's hear about who pays for retired NWT players' knee surgeries. And why not rip into AEG, for the "good will" this WPS sponsor garnered for themselves while they sold out the best team in the league. (Called it here, natch.)

How about some bitching about player development systems? The weirdness of international scouting for the WPS? And the fact that FIFA can't think of anyone who knows how to play soccer besides Marta. (I mean, she's great - amazing - but four years in a row? Seriously?) Let's push up against the milktoast vibe of the USWNT while we are at it, and call out the US Soccer Federation on its apologetic attitude that the women's team has a (MUCH) better record than the men's team in international competition, as if this was something one should be sorry for. Or: let's call out FIFA on their paternalism and test this hypothesis: FIFA's involvement with the women's game has set the development of the women's game in most countries BACK, because FIFA requires that the women's program be run by - you guessed it - the men who run national football associations. Who are mostly corrupt bastards. Why won't FIFA deal with a separately organized National Women's Football Association in those countries which have failed their women's program?  Like: India, Uruguay, South Africa and, oh, let's say Spain.

Sports fans want their sport taken seriously - this doesn't mean uncritical boosterism - far from it.  We want reports on the highs, and the lows - especially the lows! - the problem with women's soccer has been that the real lows (see above) are not reported. Instead we get nothing, and then a blip of hysterical shit about how violent the women's game is (see the men's World Cup final, anyone??), and an open invitation to the morons who never watch the women's game, ever, to give their opinions about how lame it is.

Every now and again someone writes something real about the game - Grant Wahl and Andrea Canales's stories about Hope Solo's return to the US Women's National Team after the World Cup fiasco, for example.  Coverage like this is rare - and, frankly, that controversy would have had a very different shape if sports writers had been more critically engaged with the USWNT from the start.

Sports fans gripe and complain, we obsess and worry.  Fans of the women's game have few forums to vent about the real stuff - and it's infuriating to watch this stories go uninvestigated and unremarked upon. We deserve better stories than the "news" that women lose their tempers. Much better.
4 comments: 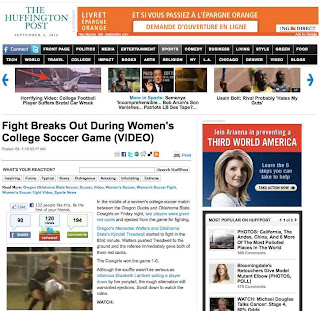 The Huffington Post published a sensational story on its front page - players in a college soccer match got into a FIGHT! Can you BELIEVE it? Players, shoving each other?! Throwing sneaky punches? And then they got EJECTED from the match! Damn, that's intense. Oh, wait. That's not news.

Women get into a scuffle!  In a college soccer match! And get two red cards for it! And make headlines!  I am so sick of this shit. If it were the WPS, yes, that's news - if the fight were truly spectacular, which this is not. But hey, why cover the WPS?

(The actual event is so singularly uninteresting that it boggles the mind. This is, to my mind, even worse than the Lambert incident, because not only was the confrontation totally ordinary, it was also properly refereed! Where is the news here??? My god - how many men 's teams finish with 10 players on the pitch because of stuff like this? It's utterly banal.)

Scuffles, fights, shoving matches - none of this should ever be news because the players involved are women. That is the only reason this is considered newsworthy here - the only reason.

If we accept that as newsworthy - well, what else should we make headlines out of?

Women are competitive! Women get pissed off! Sometimes, they lose their temper! STOP THE PRESSES!!

Actually, I mean that last bit.

Stop this sexist press, or I am coming over there with my soccer-playing harpie warrior bitches, we are going to foul the living daylights out of you. And we aren't going to be pulling no ponytails.

Oh, sorry, was that too aggressive? Did I lose my ladylike composure?

I'm so fed up with stories about women losing it on the field - this is full-on media collaboration with the worst aspects of sexism: Make women out to be monsters, all the while burying the story of the very real links between violence against women, homophobia, and the mainstream sports culture that media produces.
4 comments: