I wrote about Sam Gordon the other week for Salon. Love. Her.
2 comments:

Tough Mudder: The Deskilling of the Cross Country Runner? 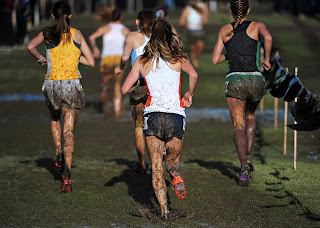 Painted in mud, the best high school cross-country runners stumbled across the line. The exhausted pack ran their worst times all season. The painfulness of this fact was thrown into stark relief by the boorish slogan suspended across the course finish: "Run hungry. Taste victory."

Nike Cross Nationals is run every year in Oregon at the Portland Meadows Race Track. The December event is one of two cross-country races presented by corporate sponsors as national championships. Nike's event is team-centered (though individuals can and do enter). The December 8 Footlocker Cross Country National Championship (held in San Diego) is an individual competition. (The USA Track and Field Association also runs a national championship.)

Nike Cross is the strangest of cross-country meets: the course is not run on one of the region's fabled cross-country trails. It is staged instead on the infield of a horse race track. The runners get moguls and slippery avenues of mud. The course is slow: long stretches of it are covered in puddles of water. Race officials joke about picking shoes out of the field from races run in past years. The course is optimal when it is frozen. This is the one race for which the runner prays for frost. Last year temperatures hovered at 30. The boys' race was won by Futsum Zeinasellaissie in 15:03. This year was balmy: the course was not just muddy, it was gross. Sam Warton slugged it out for a 17:06 win.

Runners have to have tetanus shots to run this race. The air is lightly perfumed with manure. The race is, after all, run on horse pasture.

At the state-level no high school team would dare host an event with a course like it. It'd be considered dangerous and weird. Teams do train in harsh weather and on wet ground (this is the signature of coach Bill Aris's training regime and his girls have won the race seven years in a row no doubt because of their experience with mud). But the fastest runners want to run fast. Some courses are faster than others, but the idea is that a good race explores the limits of what is humanly possible on the day that course is run.

The spirit of the cross-country trail is that it be a trail, not an obstacle course.

At Nike Cross you see some runners cross the finish line painted in mud - not because it has been splashed on them, but because they've fallen into pools of it. Watching Nike's highlight reel, I was struck by how awful the pack looks. Frontrunners look tough, sure, but the rest of the field looks ruined.

Of course there is something fun in the idea of making the best runners race against the worst conditions. But that is not how this race is presented to the teenagers running it. It is presented to them as the best team competition in the country. I got the distinct sense that even the winning athletes were disappointed.

Nike's marketing folks assert that this mud is part of Oregon's "thing." But it isn't. When cross-country runners think of Oregon, they think of gorgeous trails along the coast, the Steve Prefountaine Memorial Running Trail. The University of Oregon (in Eugene) is one of the country's premier programs. Sure, a cross-country runner wants to "get her mud on," but even more, she wants her team to run well.

From an elite runner's perspective, the logic of the event is a mystery. It is, in fact, something of a mystery when measured against Nike's claim on running, as a sport. It is ironic that the brand associated with the development of a lightweight shoe designed to reduce drag - to make your stride lighter - should sponsor a race in which the athlete's feet are sucked into mud. For much of the course, with each step the runner has to break the mud's suction. Imagine running with someone grasping onto your feet. That's what large parts of the course feel like.

People seem to think that Nike stages the event this way so as to make cross-country "spectator friendly." The racetrack has covered stands, and it's easy to film the race on these grounds. But cross country spectators will choose to be by the trail - who wants to sit indoors at an outdoor event? The audience for the race was in the mud, with the runners.

Nike stages this event this way not for people, but for cameras.

Kids covered in mud make for fantastic photos. Or do they?

A little combing of the interweb turned up the above portrait in misery. And this is the expression I saw on much of the pack. A lot of runners looked upset - angry, frustrated, confused.

Mud runs are a growing phenomenon - those courses are designed to make runners swim in mud, scale walls, crawl under barbed wire like G.I. Jane and Joe. They are fun. Crazy. But fun. That is not, however, what these athletes signed up for.

Nike addressed them as elite runners all weekend. But did Nike stage an elite race? 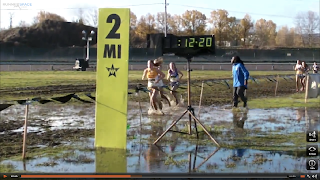 You learn a lot about yourself when you lose in good fashion. A good loss can be as inspiring as it is humbling. For many of these runners, this was their last race as a high school athlete. Some ended their high school career with the worst time they'd posted all season, in a race that felt pointless.

My sister coached the team that finished dead last. So I have a personal reason for thinking about this event. I've learned a lot from her over the years, and our conversations about this event have been illuminating. (My perspective here, it should be said, is entirely my own.)

Cross-country is a team sport. An individual might win the race, but a team can't win the race on an individual's performance. Nike's event is perhaps engineered to foreground that fact. This course is designed to handicap each individual runner as if they were horses.
But cross-country is a curious team sport. A great team knows that its accomplishments are all the greater when that team allows each of its members to realize his or her potential to its fullest. I've always thought that this was where you found the spirit of the sport - in this chemistry.

The production of a national championship as a runner's version of Wipeout is a sporting version of what social theorists describe as "deskilling." A race is here turned into a spectacle, the talent and experience on the field is made secondary to the moving of merchandise - the question is not who won, how or why, but who was entertained and how much they - we - are willing to buy.