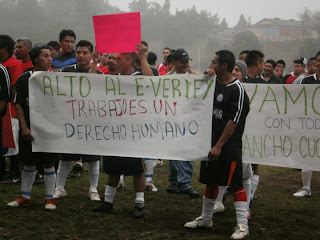 by Fernando Romero, Guest Writer
Fútbol has long been used as a key organizing tool for day laborers and immigrant communities in Southern California. One perfect expression of this fact: The National Day Laborer Organizing Network (NDLON) was born out of a pickup game between two teams made up of jornaleros (day laborers).
The game that birthed the organization has grown into an annual tournament, played this past Sunday at the Rose Bowl. Jornaleros from all over the Los Angeles region competed in the 10th Annual Day Laborer Soccer Cup, on teams representing labor centers or street corners from Los Angeles, Orange County and Inland Empire. Jornaleros, community leaders, students, activists, futbol fans (and yours truly) found themselves on the fields adjacent to the Rose Bowl on one of the mistiest days in recent memory. I was privileged enough to play with the team from Riverside.
This year’s tournament was played in the midst of one the ugliest moments in recent history for immigrants, documented or undocumented. The political climate in California and throughout the country has taken a range of horrifying shape, from the overt racism of Tea Party candidates (and the communities they purport to represent) to Arizona’s SB 1070, undocumented workers and immigrants are increasingly under attack from demagogue politicians and legal policies aimed to scapegoat and oppress. (Click here or here for information about immigration reform.) 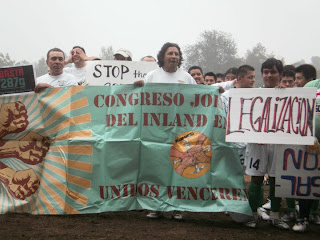 The day’s events began with a press conference and an opening ceremony that included an introductory procession of each team. Each team held a banner with a theme relating to a current immigration issue such as the DREAM Act, Section 287 (g) of the Immigration and Nationality Act, E-verify, the Safe Communities Initiative, and, of course, SB 1070. Members of each team gave a brief description of their theme and the immigration policy or issue it represented. NLDON organizer Eddie Gonzalez explained, “the banners were meant to communicate a message between local governments and media that this is what the workers are asking for.”
West Los Angeles took the championship, Laguna Beach came in second, Pasadena third and Rancho Cucamonga fourth. The true purpose of the tournament was not the distribution of trophies, but to a plant a seed of political/social consciousness for the day laborers, a demographic that for their struggles as part of the working class and their invisibility in society, seem to carry the burden of the immigration issue on their backs.
Gonzalez said the tournament has been used as an organizing tool, but also to give the jornaleros a day to come together as a community. He said the event also allows for the jornaleros to come together and work for a common goal.  “The hardest part (of the tournament) was getting the players there. Along with the jornaleros, we organized car washes in order to fundraise for transportation and other things needed for the tournament.”
Gonzalez explained that the anti-immigrant climate is felt by the entire community. Scare tactics used by anti-immigrant groups in the Inland Empire kept regular players from participating in the tournament and some of their members had recently been deported in raids. Most notably, last Fall, a Neo-Nazi group had fixated on a day laborer site at a Home Depot in Riverside near the 91 freeway, and gathered there to stage a series of racist protests, shouting “American jobs for American people” and “white power”.
The atmosphere of the tournament itself was removed from the everyday struggles of the workers, who must navigate such extremism just to make a living. Instead, the mood was upbeat and relaxed - like that of any other Sunday in Latin America, where the day revolves around family and fútbol, whether one be in Los Angeles or Lima. 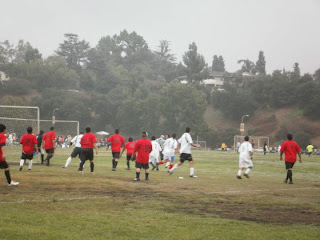 “You can see it their excitement to play and take part in the event, “ Gonzalez observed. "For a lot of them this day is the only time when they can forget about being a day laborer. When they can wake up and not have to worry about standing in a corner and wait for a job to come around. The one day you’re able to take away from being in the shadow.”
It’s been said that in places where people are poor, and mad for soccer, a revolution could be based on the sport’s intrinsic ties to the working class. That because of soccer’s appeal to the working class along with its mass following, it could serve as the spark for social change. I’ve been present at immigration rallies here in California that have implemented chants born out of soccer stadiums in Latin America. And every time, it’s a vivid reminder of the power of soccer to bring about social and political change.
People living in exile tend to be in contact with other people also in exile and share similar experiences. The purpose of the tourney is to bring together the day laborer community, a community so invisible, and distant from each other that no other activity or past time seemed apt to motivate them enough to give up a precious Sunday and drive to Pasadena.
Most of the players would not identify themselves as “political”, but it does not matter: the tournament aims to bring a sense community to a demographic so disenfranchised and invisible that it seems that only through soccer could that sense of community ever be accessed. The revolution may not be televised, but it might just start on a soccer field.
Thank you Fernando for sharing this story with From a Left Wing! I'm finishing a book project, and have not been able to post regularly. Fernando worked with me and Alan Minsky on The People's Game and also worked on Gustavo Arellano's much loved program "Ask a Mexican" - both on KPFK, 90.7 Los Angeles.
2 comments:

Today Naija Football 247 reposted a Sahara Reporters story about journalist Olukayode Thomas's struggle with the Nigerial football/sporting executive Amos Adamu (FIFA and CAF executive board member). "How a David Defeated Goliath in a Nigerian Court" is well worth reading, as is a more recent story on the same site about the place of that scandal in FIFA's delay of the 2018 World Cup bid ("Nigeria's Amos Adamu Offers to Sell FIFA Hosting Rights for 500,000").

As most sports sections report on the corruption in the Nigerian football association, few seem to notice that in the midst of this story, Nigeria's U20 women's squad became the first African team to play in a World Cup championship final match. After beating the always strong Japan at the group stage, and knocking out the U.S. in the quarter finals (highlights of Nigeria's defeat of the US), the Falconets took down Columbia (another great story of the tournament) to reach the championship match. There, they lost (as so many do) to Germany 2-0 (highlights of that game here).

The story of Thomas's fight with Adamu (who has sued the Guardian journalist for libel) provides an interesting context for understanding the administrative chaos that surrounds the sport in Nigeria.
It is hard to imagine how the women's program survives at all - and they don't just survive. This summer, they played very smart football - the kind of well-organized, conservative game associated with perrenial powerhouses like the U.S. and Germany. Nigeria's women's teams are always stacked with talent and play well against much more well-funded and administratively stable sides.

And the more I read about what's going on in Nigeria's sporting community, the more I want to know about these players, and the men and women who support them. These are the unheralded superstars of the sport - for they do this with no hope of riches and international fame.

(And sorry for disappearing - am finishing a non-football related project!)
2 comments: