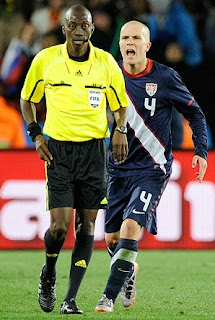 Sport culture seems to be the one discursive space in which we can declare that we were robbed, that our team was cheated, that the game wasn't fair - and we don't come off as bitter or resentful.  This sort of anger - at being kept out of the World Cup finals by someone's handball, or at being cheated of the three points awarded to a win by a rogue referee - is perfectly allowed - a certain sense of injustice is in fact nursed into an art.

But try complaining loudly about being denied a promotion, or being paid less than the guy hired after you. It's hard to make a heroic complaint about a social slight, or feeling like you've been given a raw deal - in, say, the financing structure of your mortgage.

Because we live with a myth regarding the "level playing field" in sports, we cry loudly when that illusion is shattered. Ironically, in the place where we really need a level playing field - access to education, in professional development and mobility, access to healthcare - one is expected to stomach much more bitter disappointment without complaint.