What if the women's NTs played in place of the men? 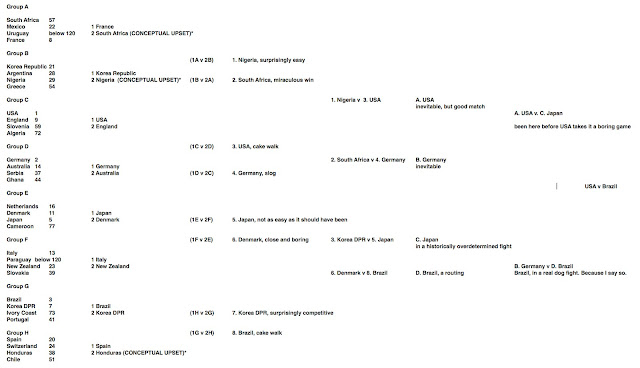 The above represents an experiment in which I imagine the 2010 World Cup as played by corresponding women's teams (click on image to magnify).  Using their (suspect) FIFA rankings and what I know of the international women's game, I project the outcome.

Many of the big names in the men's game go down early, as their national associations are terrible when it comes to the women's game. Spain, England, Argentina, France, Portugal - none of them make it to the final eight.

The tournament (in my mind) starts off interestingly with a near upset as England gives Germany a  difficult time in the "sweet sixteen" (revisiting Euro drama). Nigeria and South Africa both advance to the final eight where Nigeria unfortunately goes down to the US and South Africa falls to Germany. Japan and North Korea go head to head at this stage for a historically overdetermined fight for a spot in the final four - Japan wins that one with style - and we end up with a quarter final of usual suspects - Japan, Germany, Brazil and the US. The US beats Japan in a tough but boring game in which the American defense shuts down an otherwise exciting squad. Brazil takes down Germany in a hard-fought game leading to the grudge match of all grudge matches - USA v Brazil.