A Tree Falls in a Forest: Watching Women's Football

Women's football faces serious challenges - like the commonly held opinion that it's boring.

I've heard this opinion expressed not only by men - by men who love football so much they'll watch the game in any form and can opine about the most minute aspects of the game and all of its institutional intrigue - but by women who are also ardent fans of the game, and even play themselves. Some of my own teammates have said as much.

These nay sayers will tell you the pace is slower, the play less spectacular - that the women's game just isn't exciting to watch because women athletes aren't as explosive as men, and the games aren't that competitive. Now, as is true of most biased thinking, these opinions are grotesque distortions of a few truths (the strongest women aren't as strong as the strongest men, or as fast, and in even those countries with competitive semi-pro leagues, the women's game is unevenly developed - witness Arsenal Ladies' dominance in the UK, Lyon in France, Umea in Sweden).

But the fact of the matter is, if women's football seems boring to these people, it isn't because women aren't men, or because one team is better than the rest. Almost every person who has said this to me has also confessed that they have never seen a game - not even on television.

I come from a country that loves NASCAR. Half my male relatives here in London spend their weekends watching golf, and the rest of the week talking about it. These sports are, in my view, inherently boring. So is the Tour de France. And the New York Marathon. Cricket, anyone? Who wants to watch that? Turns out, lots of people do.

The Chicago Bulls' dominance didn't kill basketball. The fact that Michael Jordan was just plain better than everyone else didn't make the game boring. Everybody either loves the Yankees, or they hate them - and that makes us love baseball even more.

I love going to the Staples Center to watch The Clippers lose - again. Sure it's fun to watch the game - but that fun is amplified a thousand times over by being a part of the crowd. This is why very few people go to these things by themselves - I went solo to a Galaxy game and boy did I feel weird, like the kid who sits by herself at the school cafeteria. Until I was "adopted" by the Chicana lady sitting behind me - the two of us spent half the game on our feet offering - at a very high volume - to play defense.

The pleasure of watching minor league baseball is in the ambiance in the stadium - who cares if the Durham Bulls win or lose, or by how much? I mean, one cares - we route for them, but we show our love by being there - whether they are having a winning season or not. We go to such things because we love listening to our neighbors crunch statistics, scream at the umpire, or work through their philosophical treatise on the confrontation between a particular pitcher and the man at bat.

If these things weren't true, we'd all watch sports on t.v. and teams would play for the camera alone.

Duke students sleep in tents for weeks because they don't want to watch the Chapel Hill game in their dorm room - they want to watch the game in Cameron Stadium, squeezed into the stands with everyone they know. And scream their heads off.

And there is nothing like the euphoria of watching a great goal with a stadium full of people, having your shout both drowned out and absorbed into that of thousands. I can hear the oceanic noise of Arsenal fans from my flat - it's the best music on earth.

The pleasure and importance of being there is arguably most intense for the football fan. I remember arriving to a Galaxy game a few minutes late (I'd driven directly from work - argh, the 91!). I had to park miles away from the stadium, and as I hurried across the gigantic parking lot I could hear the crowd - oohhing, ahhing in waves as the ball advanced, was repelled, as an attack took shape and was dissolved. The noise was continuous, rhythmic - my heart was in my throat just listening to this. I don't know a sport that has this sound. Basketball, baseball, American football, rugby all stop and start. As exciting as it is to see any of those games live, you don't get that rush of holding your breath for 45 minutes, and then doing it again for the second half.

Watching a baseball game has the pleasures of a day out with your friends. Watching a futbol match is like a crazy one night stand with a sex fiend. There's no rest, no pause for reflection - it's like jumping off a very, very tall cliff. Twice. This is why football fans are so nuts. And sometimes dangerous. Think: Fatal Attraction x 40,000. 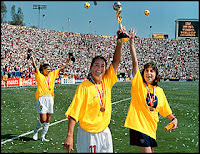 The women's game has as much capacity for producing this pleasure: the fabled 1999 world cup final more than proved this. That game was played before an audience of 90,000 in the stadium, and 40 million television viewers in the U.S. That's the most watched soccer game in U.S. history.

Women are quick, strong, and explosive on the pitch. Women athletes are arguably *more* competitive than men - we have way more to prove. Women twenty years ago and today play not only for themselves, but for future generations. And as more women from different football cultures play we are seeing all of the things that make the game fun to watch brought onto the pitch: confrontations between sides distinguished by great footwork, flare, and style and sides known for militaristic precision and strength (Brazil/Germany); historical rivalries between teams that hate each other (US/Norway - the image below is from an Olympic semi-final match, and that'd be a Norwegian player here, with a fistful of Mia's shirt).

Marta's mischievous samba before a frustrated American defender is burned into my brain: I've never seen a more flagrant or effective taunt in any sport.

But who cares about all that if there's no one else there watching it? Who do you have to talk to about it after the game? THIS is why people think women's football is boring. Most sports fans want to belong to a mass audience, be a part of the crowd.

The media should be more committed to combating the problem. Aside from the odd blog or two, and the occasional minute story about women's league games, there is very little attention paid to the sport - especially when you consider how very many people

Walk into the sports section of any bookstore and you might be amazed at how many books there are fly fishing. Or sailing. It amazes me. But of course it doesn't surprise fans of those sports.

But walk into a bookstore in the UK, and try to find just one book about women's football - and I don't mean the one book of drills out there (which seems to be a standard drill book, in which some clever publisher just substituted the feminine pronoun & put in illustrations of girl players). In fact, try to find a book about any women's sports or about any women athletes. Out of the six hundred sports titles at your local Borders, I defy you to find 10 about women athletes in any sport. (They'll have Paula Radcliff's autobiography, but usually that's it - not even a book about Billy Jean King or Martina Navratilova.) These books are out there. Mia Hamm's Go For the Goal, for example,

was a best seller in the US - and there are autobiographies of other US players, as well as two social histories of women's football written by the UK academic Jean Williams. There's a whole magazine about women's football (Fair Game) - but who carries it?

Want to make money? Tell Nike and Adidas to stock women's football boots, and long pants for playing in cold weather. And shirts for the women's teams while they're at it. Broadcast women's games, and advertise stuff like that, just as is done for the men.

Until the media commits to the story, women's football is the falling tree in the forest no one hears. Until networks broadcast women's games regularly, newspapers cover league play more comprehensively, until the story becomes about something more than how miserably women's football is treated - and becomes instead a story about great upsets, struggling teams who don't play to their potential, and improbable sides that play well above theirs, about lousy managers and magicians - until then nobody aside from the most dedicated will pay any attention.

It's up to us of course to change things: To march up to the newstand and ask for Fair Game, to ask the bookstore manager to carry more titles in sports about women athletes. To write in to newspapers asking them to expand their coverage. And to get ourselves to the games and show our love in person.

The FA doesn't make the last bit easy: nationwide, amateur women's teams in England get the leftover slot when it comes to pitches. We play on Sunday afternoon - on the same day and at the same time as women's Premiership teams.

Well - until that gets straightened out, I'll do my best to make the odd weeknight match. And on Sundays, you'll find me routing for Arsenal ladies, but playing on the Hackney Marshes, and wondering why the fuck no store in England carries a Marta Umea shirt.