Yrsa Roca Fannberg's quixotic blog, art versus sport is more than a Barça blog - it is what the title promises, a site pulled in these two directions - art and sport - at once. I've come down to Barcelona partly to meet Ysra, and to look more closely at the wonderful watercolors she has posted on her site. Last night, she kindly met up with me and my friend, the artist Ming Yuen S Ma.

Yrsa is an independent minded artist who works across a range of mediums - at the moment she is studying documentary film-making. She makes these gorgeous watercolors in the same spirit with which she writes - with an eye to mood, delicate questions of psychology and emotion, with an eye to not only the sublimity of the sport, but to its beauty - which is sometimes quite ordinary, and at other times quite melancholy. The tone of her writing is nearest to Eduardo Galeano's Soccer in Sun and Shadow - one of my all-time favorite reads.

It was a joy for me to meet a woman similarly engaged by the sport - for those of us whose identities are primarily bound up in art and intellectual life, an absorbing passion in football can be quite isolating. Even though many women play and become fans via their attach

ment to their fathers, brothers, to the men in their lives, that affection for "their" sport can make us, well, a little bit weird.

Speaking for myself, when I've tried to talk footie with guys as a way to, well, talk to them, I've come away with the distinct impression that I've trangressed some major rule of womanly conduct. A few weeks ago, for example, I sat on a London bound train with my friend Mandy, who is perhaps the biggest Arsenal fan ever (and that is saying a lot). She's followed the team since god knows when (and knows every minute detail about the French national team as a result). She no casual expert on this subject. 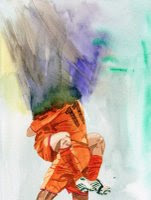 So, across the isle are two guys: a BBC sports journalist, and an American tourist. They were talking football - and stuck with this subject for a full two hours. They talked about relegation - a fascinating, exotic form of sport brutality to us Yanks. As it happens, I'd just read National Pastime, a comparative economic analysis of major league sports in the US and around the world - focused in part on the relegation system and its economics. I mentioned this, in a casual conversational friendly way. They both looked at me, said nothing, and then continue talking as if I'd said nothing.

I suspect a lot of women who love football have had similar experiences - my friend Mandy hadn't even bothered trying to talk with those guys, and welcomed me back to our discussion with a knowing look. Women really really love to talk about their sports, it sucks to be shut out of a conversation because you are a girl - and that sense of rejection is made worse when a guy looks at you like you are stupid. Men are fans - when women talk footie we are, well, crazy, or we must be lesbians - or, crazy lesbians.

When men talk footie with each other - when they talk in great depth and with enormous intensity of feeling about other men - it is often not just about footie, it's about their relationships to each other. It's a way to be a guy with other guys. A woman who tries to take part in this sorts talk upsets whatever delicate balance is in place that allows guys to talk with and about guys

without, well, thinking about guys.

Anyway, back to Yrsa's work: Most representations of footballers are hyper-heroic, hyper masculine. When Yrsa offers a visual meditation on that ecstatic post-goal moment, she literalizes this explosive joy, as above, in "Encima 2" (I think that's 'Ecstasy 2' in Catalan). Sports photography tends to amplify the testasterone even in failure, when our sports heroes are made to look more like fallen soldiers than, well, human. Not often do we see them look like the big babies they sometimes are, like Messi here on the left.

Take this portrait of Thierry Henry (right, below): he looks weighed down by his own feet, like he gets heavier and heavier as he gets closer to the ground. If you've ever played 90 minutes, you might relate - I know that there are times when the ground feels attached to my feet - like the earth itself is holding me back. I think I see in this both an affection for Henry and a mix of hope and a fear of disappointment. But perhaps I project.

The thing that moves me most about these images - about especially "In Training", pictured at the top of this article - is that they are quite plainly made out of love. And that love isn't filtered by the requirements of macho/heroic tradition. Maybe because Yrsa's a woman it's ok to look at and see men in this way, and to paint them with this sort of delicacy. Maybe because she's half Icelandic/half Catalan - and because she played herself in Sweden until she was 14 (she says she was terrible) - she approaches the subject of Barça and football culture with an eye that is both that of an insider and that of an outsider. I think Barça fans would agree that the freedom with which she looks at this world gives us a glipse into its beauty and its emotional intensity.

When she'd spread her portfolio out on our table, the waiters in this tapas bar stopped, called others over, and pointed to the portraits - "Oh, that's Messi, for sure, look at how he holds his head", and "You can't miss Thuram there" or they'd shake their head in consternation as they identified the prodigal son: "Ronaldinho." Our faces lit up with a kind of warmth - the same warmth that animates Roca Fannberg's images: these are members of the family, and we love them no matter what.