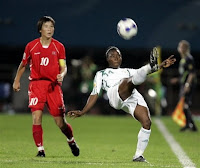 If I ask myself how playing soccer has changed me, I'd have to say that I fall a lot more than I used to.

Coaches say "stay on your feet" before a game. They need to say this because falling is such a big part of soccer. Who says "stay on your feet" before a baseball game? Nigerian Faith Ikidi is pictured here surprising North Korea's Ri Kum Suk with a reverse kick. I have no idea if she stayed on her feet as she did so - but clearly she's not playing like that's her only aim.

Falling was not a part of my life until I started playing about five years ago. Tripping, sure. But falling? Flying through the air falling? These were bodily events to be avoided at all costs.

Falling was not a part of my life until I tried tackling Sojin.

This was at the start of my new formation as a soccer nut. I was one of those dangerous new adult players with no sense of her own physicality or how playing the game actually works. I was running full-on at Sojin, who had the ball. I had no plan, and I wasn't wearing cleats.

I don't remember what happened, but I ended up launched into the air like Superman, except of course I can't fly. I landed flat on my stomach - a very weird crash landing that knocked the breath out of me.

The experience was extremely bizarre for me. Totally mystifying. What had happened? Why did I fly through the air like that? What had I done? Was it my fault? Was it Sojin's? (I had a terrible tendency to want to blame whoever else was near me for whatever happened to me on the field.) Being a congenital theorist, I made everybody stop playing to process the experience with me. (I am amazed these folks put up with me during that first year!)

Sojin, a far more experienced athlete and certainly a better soccer player, was bemused by my confusion, and patiently explained that if you run full speed at someone - if you charge at someone like that - you are very likely to go flying. "Plus," she said very sensibly, "you need cleats." (That was the last time I played in anything but the proper shoes.)

Nearly a year later I had another memorable fall. In the intervening months I'd started playing pick-up games and had learned a lot. I'd learned to think less - or, more nearly, I'd learned to let my body do more of the thinking. This time I was tackled by a pretty big guy who meant me no harm, but physics dictated that I go ass-over-teakettle forward through the air - I'd been running, and somehow he got me from behind. I tumbled right over myself, and came up on my feet - ball still at my toes. I tried to play on, but my friends were all so stunned that they'd stopped to stare. They were rightly wondering if I was OK - as every other time I'd fallen, I'd been rattled to my physical and psychic core.

This time, however, I was relaxed when I went down, and so the fall didn't really take me down. It was, in fact, fun. I remember that fall in great detail - and a few others, too. A player nicknamed Barca slide tackled me in a training session last spring - she mistimed the tackle just a bit and clipped my feet. Everyone was mad at her, but I was thrilled that'd she'd considered me enough of a threat. Sure, I was sent a few feet in the air, but I was fine. And I'd won my team a free kick. In June, I played in a tournament staged over a rainy weekend, and the slide tackles were fast and furious - I know I took at least two hard tackles that had me kissing the grass. I found both bracing - like a splash of cold water. They were clean, fluid tackles, too - something I admire, even if they are directed at me. And I honestly think I played better that day for them.

As a defender, you often go flying because you are giving, not receiving the tackle. I am still to green to be working on anything but instinct, and so when I go flying it's out of a reflex. I don't usually know what has happened until I'm wiping the dirt off of myself. Still, I'm thrilled by the experience.

I am not yet at the level I most admire - the player who throws herself in the air to win the ball or score. My falls are reactive - and they are usually caused by something I am doing with my feet. I'm not the player who will dive to head the ball into the net - but I would very much like to be her.

I used to think that falling was synonymous with getting hurt. But I know now that that isn't exactly true. Falling awkardly, falling when you are tense - this will hurt. But play relaxed and fluid, and you'll be surprised by what your body can do. Somehow you fall, but you don't fall down.

Email ThisBlogThis!Share to TwitterShare to FacebookShare to Pinterest
Labels: style