New Mexico/BYU: What happened to the Referee, Joe Pimentel? 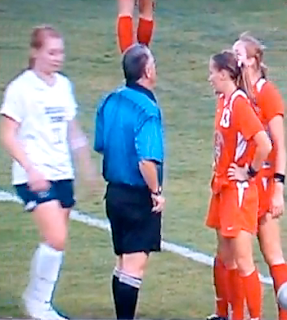 Elizabeth Lambert's name is now synonymous with violent play. What happened to Joe Pimentel (pictured here, giving Lambert the one yellow card he issued)? The center referee basically folded his arms and did nothing through that match - was he suspended, pending some sort of inquiry and evaluation? Nope - He went on to referee a men's game a few days later: the UCLA/Washington PAC-10 championship match, in fact. Does that seem fair to you? This is in spite of the fact that the referee assignor and high level administrators were at New Mexico/BYU match. I've e-mailed the board of the National Intercollegiate Soccer Officials Association, and am waiting for a reply. I encourage readers to do the same - this is not an incident in which a ref missed sly fouls committed off the ball. My faith in the fairness and competency level of refereeing at NCAA matches is deeply shaken by not just the poor officiating at the New Mexico/BYU game, but by the fact that the referee ultimately responsible for policing such things was in essence rewarded for his failings. When do we get a public statement from him, from the NISOA and from the coaching staff at New Mexico accepting responsibility for their role in keeping an out of control player on the field?