This decision comes from the International Football Association Board, which is made up of representatives of the four UK Football Associations (England, Scotland, Northern Ireland and Wales) and FIFA, which itself has four votes in these decisions. One can imagine what that boardroom looks like - Sith Lords of Soccer, Imperial Experts in Sexism and Islamophobia.

In making this ruling, the IFAB is hiding behind Rule 4, regarding player equipment. This is an arbitrary interpretation and application of FIFA's rules against wearing uniforms with personal political or religious statements ("compulsory equipment must not have any political, religious or personal statements").  Obviously, national uniforms frequently carry both political and religious meaning (Israel, anyone?). We often watch players cross themselves furiously before taking penalties - why not ban that gesture from the pitch? The demand that these women either remove their headscarves or withdraw from the competition is itself a strong statement about religion and politics.

Women athletes have worn the hijab in Olympic events at least since 2004 when Bahrain's Ruqaya Al Ghasara took the track - in 2008, she made headlines wearing a "hijood," a breathable form-fitting hood designed specifically for athletes.

Soccer players have been allowed to compete in international tournaments recognized by FIFA while wearing a variety of uniforms that meet their needs. Below is a photograph from January's South Asia Games - here the Indian national team competes against a Pakistani team outfitted in stylish green uniforms and headscarves. 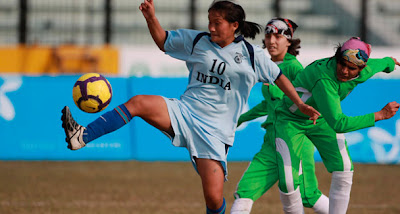 CNN published a story about November's historic match between Palestine and Jordan. This match was celebrated as a step forward for women's football in the region and featured a few players wearing long pants and sleeves, headscarves or fitted caps. Muslim women athletes across the world adjust their gear to fit their needs, compete in international tournaments, and this should be encouraged. (See the blog Muslim Women in Sports.)

This ruling is yet another instance of imperialist and patriarchal meddling and it betrays the shallowness of FIFA's investment in developing the international women's game, as well as the profound hypocrisy of FIFA's pretence to being "above" politics.  At least now they've made their Islamophobia official.

This seems like a fine moment to recall Sepp Blatter's most famous statement about the women's game:


"Let the women play in more feminine clothes like they do in volleyball. They could, for example, have tighter shorts."

Fuck that. I'll take headscarves and lime green tracksuits over that bullshit anyday.

[April 4: Follow up - Some articles on this topic point to a 2007 IFAB/FIFA ruling supporting a Canadian referee's ejection of 11-year old Asmahan Mansour from a match for wearing a hijab. The referee claimed it was a "safety" issue (on the grounds that she might be strangled!). Quebec's Soccer Association does ban the hijab as part of a broad ban against "the Islamic veil or any other religious item." Which is I guess a safety issue in a world that imagines a terrorist under every turban, and behind every veil. Her team and four others withdrew from the tournament in support ("Hijab debate gets political in Canada").

That same 2007 IFAB decision left room for football associations to make their own decisions about the hijab - apparently only as long as those FAs cooperate with FIFA's worldview. For more - see "Hijab Ban Belongs in the Sin Bin" from the excellent Muslim Women in Sports.]