More thoughts on more losses (Mexico, England and the unfairness of it all) 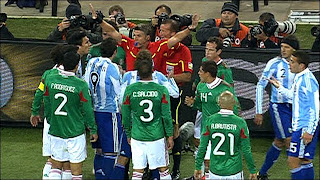 It was all too much today - one great goal ignored (Lampard) and one totally, unambiguously offside goal allowed (Tevez). We watched some teams exploit their good fortune, and others collapse in the face of their bad luck.

It's become a World Cup scripted by Emile Zola. I am thinking of his utterly depressing novel L'Assommoir (the word means a dive-bar one goes to only to get hammered). At a key juncture in the story, the lovable drunk Copeau is doing his best to get his life together, but takes a bad fall at work and breaks his leg. His life is a fast downhill slide to abject poverty from there. He just doesn't have the constitution to overcome the kind of bad luck that in fact breaks a lot of people. My students always dig that novel, because this story feels real - the story of bad things happening to decent but very flawed people. 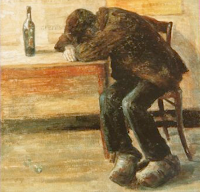 Is it in the service of realism, I wonder, that Sepp Blatter wards off all pressure to use technology to, say, confirm that, indeed, the ball has crossed the goal-line? Is that what he means by human drama - Life is not only unfair, it's a cruel and pointless venture?

I don't think England had a win in them today - it didn't seem like it. Not when faced with Özil, Klose, and Podolski on the attack.  Germany played brilliantly - and, really, that's why they won.  But, like a character in a Zola novel, England can now stew in its bitterness, feel robbed, and pour more of its energy down the drain in a stream of complaint.

Mexico - oh, my heart.  The first twenty-six minutes of the match today were pure, insane delight. But then the magic fell apart with Tevez's offside goal. Players saw the disaster replayed on the stadium screens (as happened after Lampard's un-goal as well). That could not have helped matters - it was impossible to miss: Tevez was so offside that he must have known it himself.  The hand of God, moving one of his pawns into position. That sort of thing is dispiriting. So a few minutes later we see El Tri give up another goal with a limp pass - the sort of mistake made by someone who feels the decks are so stacked against them that the game isn't worth playing anymore. You feel screwed by the system, so you screw yourself.

Argentina played beautifully, Tevez made sure we knew he was more than a cheat, and fired one of the best shots of the tournament in the 52nd minute. Great teams exploit luck and the other side's error. They are captains of a lucky universe.  The rest of us pretty much just go down with the ship.