Brandi Chastain Called Me! (to talk about the Capital One Cup, media politics, the new Title IX generation & Arakawa's awesomeness) 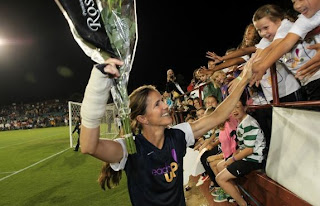 Brandi Chastain and I talked on the phone today! Skip to bottom for the MP3 if you don't want to read my somewhat fragmented overview.

Chastain is remembered by most people for scoring the winning penalty kick at the historic 1999 Women's World Cup final at the Rose Bowl in Pasadena.  (And for tearing off her shirt with joy - and the controversy the gesture created.)

She's had an unusually long career playing at the highest levels in the US and internationally, having retired from competition only recently, at the tender age of 42. Today she made the press rounds as the spokesperson for the Capital One Cup - a new annual award for Division I NCAA sports teams, recognizing them for their records and for the integrity of their programs. The $200,00 grant will fund student-athletes at the winning program who want to pursue graduate study. Chastain sings its praises, quite rightly as it recognizes the need to reward non-revenue generating programs, and celebrate, too, athetes' ambitions beyond their Division I careers. Their facebook page is a great way to learn more about the competition. We talked about this award, and then roamed across a variety of subjects, like:

The media's attitudes about aggression and gender as NFL players Andre Johnson and Cortland Finnegan threw fists at each other on the field last week, and the story barely made an appearance in the headlines (in contrast to what happens when women so much as swear, or knit their eyebrows at each other).

She spoke briefly about the Gold Pride's folding, and had very warm words for the team's primary investors - it sounds like they just got in over their heads, but had their hearts in the right place.  (Sorry for the consecutive body metaphors.) This makes the fold more tragic.  (Though check out this announcement regarding the formation of two California Women's Premier Soccer League teams for next season, which should form the backbone of two WPS teams in the following year.) 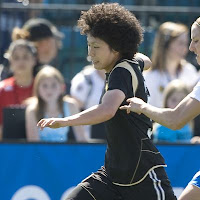 In this year's NCAA women's soccer final four we see some new faces -  Stanford, Boston College; Notre Dame, Ohio State. While we think of Title IX's impact being most visible in the '99 generation, Chastain pointed out that it is in the rising generation of athletes that we will really see what Title IX. The number of schools forwarding teams in NCAA women's soccer has tripled since Chastain played for Cal and then Santa Clara University.  This very large and growing wave of players are only just becoming visible at the top tier of the sport. Good news.

I asked Chastain what she's learned from international players, and she waxed about how much joy is in Eriko Arakawa's 'fro, I mean, style of play.  (She made the observation that Japanese players develop great footskills because most develop their game in small courts - I'd never thought of this, but it makes perfect sense.)  And we talked about how Germany's women's team has picked up another kind of game, in addition to the organization for which the team is famous. They now also have a flare to their game, just as the new generation of male players do. Brazil, she said is fun to watch, too, because in addition to the skill, you have the drama of "can they hold it together?"

I steared clear of the USWNT, as I figure we are all going to talk ourselves blue in the face about those gals in the next few months.

Anyway, in a From a Left Wing first, I've uploaded an MP3 of the interview.  It's minimally edited, and I'm rusty - lots of uhms and me ranting - thank god she's a good talker and managed to get a word in edgewise.  I was super grateful for the interview, and happy to help Chastain bring attention to the Capital One Cup - it's a fantastic idea, and somebody better figure out how not to give it to U Conn's basketball team, lest they win EVERYTHING.