This has nothing to do with soccer. I wrote this rant last weekend and posted on my facebook page.  Some readers asked that I post it here. I'll be back to soccer stories as soon as I put the manuscript I'm finishing in the mail!

Anne Hathaway's performance as an Oscars co-host was heroic. When one focuses on her performance, the whole ceremony takes on a surreal aspect. Take the ULTRA real dynamic of soporific Franco and hysterical Hathaway: This was a rather extraordinary performance of a high-energy female/femme dragging the sad-dog-weight of her man behind her. It is the flipside of sexist narratives about the “ball-and-chain” in which women hold men back, rather than prop them up (as is, well, more usually the case).

My favorite study on sexism and the academy: according to an analysis of gender and faculty promotion at the University of California, the people most likely to advance are men with wives. Then men without wives, then women without husbands, then women with husbands. I could not see from this study if they accounted for same sex couples, or the ways in which being gay/lesbian might impede one’s progress in such a hetero-dynamic system. In any case, I think we can all agree that, according to such studies, one is “better off” having and not being the wife.

Anne Hathaway showed us how true this is - the mere presence of that man standing next to her impedes our ability to value her work. And it was pretty clear to me, at least, that her performance itself was commenting on this.

For example: In a deeply ironic moment she took the stage in a tux to sing “On My Own.” The song choice, she explained, was a reference to her all-too brief appearance on stage with Hugh Jackman in another Oscar ceremony – she had been plucked from the audience to sing a duet, in which they adopted the identities of Frost and Nixon. There was a hell of a queer subtext to that performance, given the take on Jackman and his having just belted out some fabulous gay-positive, out-loud-and-proud lyrics about Milk. Hathaway said she’d hoped the actor would perform with her this year, but he’d bailed at the last minute. She might well have been talking about Franco: Franco's non-performance was by this point in the broadcast clear to everyone in the audience.

Franco gave us plenty of warnings, including his recent discussion of "bad acting" and performance - a line of thought/fascination I pursued in my work own on Andy Warhol, esp in the introduction to Pop Out (co-authored with José Muñoz and Jonathan Flatley). As we worked on that project we talked explicitly about Keanu Reeves, River Phoenix et al in relation to the performances in Warhol's films.

Eventually, I felt that in my own work I could not talk about the performances of Joe Dallesandro etc without acknowledging the hyper-active energy that is produced by the women around those underperforming men. At times last night I felt like I was watching "Bike Boy" - in one infamous scene Warhol instructed Joe Spencer (Bike Boy) to ignore Ingrid Superstar, she tries for a minute to get his attention and then just fills the rest of the time with nearly diassociated babble while he stares off into space and strokes his manly arms every now and again. It took me a while to understand that the film is not about Bike Boy at all, but about the gay men and women around Bike Boy. Bike Boy is a void. Reeves and Phoenix in their own way played with that dynamic in their films - and in a queer setting one can. But in the straight-jacketed public sphere, it just reads as so much more heterosexuality. As women basically doing all the work, and getting none of the recognition.

Which brings me back to Hathaway. Taking the stage as if one's been left at the altar is an old gag: The performer sets herself up as abandoned, standing before her audience if she’d been left there alone and unloved. She proceeds to seduce an entire theater. This kind of performance toggles back and forth between “nobody loves me” and “love me or else." The genre has been remastered by diverse figures - Judy Garland and daughter Liza, but also Sandra Bernhard (e.g. “Without You I’m Nothing”). That dynamic shapes some of the most compelling queer performance, in which the artist emerges as both intensely vulnerable and invincible. (eg Franko B's "I Miss You!" or just about everything from Dynasty Handbag.) 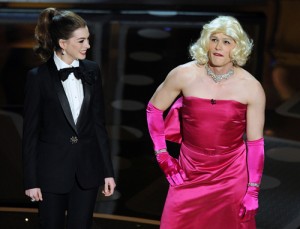 THIS, I think, is why when Franco walked out in drag, it seemed like such a failure: not just because he was styled in a jokey sort of drag more apropos of a Judd Apatow movie than a drag club, but because "showy" Hathaway was always already working drag territory.

It would have been amazing if they’d found a way to give Franco the same kind of elegance that Hathaway has in a lady-tux – but that would have perhaps been too risky for the Oscars, as it’d have required making him look both gay and hot. Given who we are talking about here, that should have been easy. Instead, he looked like the next chapter of Hollywood's drag devolution (Jack Lemmon to Robin Williams to James Franco, each one being a worse version of his drag-as-gag predecessor). A more visionary look would surely have brought Franco's appearance in drag closer to Kalup Linzy's zone, and it might have allowed us to see Franco's look in relation to Hathaway's. For Linzy’s "bad drag" looks nothing like what Franco did last night. Linzy's version of drag is queer assemblage of signs. He doesn’t look any more “natural” or “realistic” in drag than did Franco – but he inhabits drag, fully, in a dialogue that makes sex and gender and race come alive, and feel both real and unsettled. That is no easy thing to do. And it is way more than a matter of his outfit.

The fact of the matter is that in last night’s performance the person on stage closest to Kalup Linzy’s universe was Anne Hathaway – producing a theatrical, desperate and frankly scary version of feminine performance, not just alone, but in compensation for someone else's failure - as if, if she worked hard enough, nobody would feel Franco's absence. As if, if she worked hard enough, it would feel like her presence mattered. As if, to matter, her performance must anchor his.

She was not being the person who could care less, but the person who cares too much. The less Franco put out, the more she had to make up for it. The worse his performance became, the more it obliterated hers. Because when we wake up in the morning, who is the press talking about? Not the show's "wife", but the show's drag - the sad-dog manchild bringing everybody down. Fine, that's what the media does.

The whole point of performance studies for me is not that it enables actors to expand their practice into the artworld. Although that’s an interesting effect, actors never needed the discipline of performance studies to do that (a few names at random: Andy Kauffman, Sandra Bernhard, Ann Magnuson). Performance studies, however, does give us a few tools for considering the political dimensions of moments like these, and resisting mass media's flow.

Female actors with comic sensibilities and wit are particularly hard for Hollywood to accommodate these days. Things on this point have not gotten better but worse. At least we have Tina Fey, and why isn't she hosting or better, writing - the show?

Hathaway’s performances (as, for example, The Brown Duck) were eye-opening. They gestured to a Hollywood legacy otherwise completely ignored by last night’s nostalgic gestures to its own past. Comic geniuses like Lucile Ball and Carol Burnett never hosted the Oscars alone (Ball never hosted at all). Many women have taken the stage as hosts, but nearly all were required to share it.*

Few have been allowed to be on her own. Perhaps in singing that song, Hathaway was trying to tell us something.

There are plenty of goofy, smart, chatty showboats out there in ballgowns. Not only does Anne Hathaway not need a straight man to make her audience laugh, that straight man is the very thing that’s holding her back.

Email ThisBlogThis!Share to TwitterShare to FacebookShare to Pinterest
Labels: nothing to do with soccer whatsoever