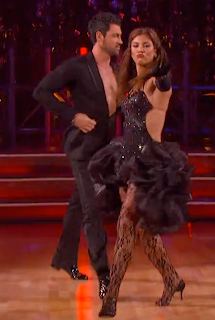 There is no getting around the subject of Hope Solo's song choice.  This week the contestants were supposed to dance to a song that meant something to them personally. She chose Enrique Iglesias's "Tonight," which she described the "team's song."

Really? Because, if true, that is AWESOME.

No wonder she made a (wonderfully) dorky 'sexy-face' through practically the whole number. It's the kind of face that any of us might pull under a disco ball, after a couple of shots of tequila and especially if the Ludacris version of that Enrique Iglesias tune was on deck.

Anyway, Solo looked fantastic. But the competition is really tough.

My fellow critics of the sexist industrial complex will unite in making their pleas to the judges: "Can you just stop telling her she isn't feminine enough, that she's too strong yadda yadda?"

Good luck with that. Dancing with the Stars is all about routine, routine. So I don't expect to see them depart from the script unless Solo wins the whole thing - in which case her victory will be all about her triumph over her own strength.

As my last post indicated, I'm less circumspect about the gender politics of Dancing With the Stars than I am about the gender politics of, well, just about everything else. DWTS is, to repeat myself, a drag show. So, I get interested in the technical information the judges share with us regarding what it takes to walk like a girl. Because shy of Ru Paul, the information the judges offer on this point is as good as you'll get.

Bruno Tonioli, for example, usefully observed that Solo needs to walk much more on the balls of her feet. As anyone who has really worn high heels knows, the heel itself doesn't carry you in a proper "walk." That's why your grandmother, who was probably forced to wear them to work, has crazy bunions - that joint was flexed, and her weight was shoved right into the heart of it. Anyway, landing on the balls of your feet rather than your heels is a tip right out of runway walking 101.

Regarding Solo's performance: Solo doesn't lift from her center - the judges are right to observe that her walk is kindof heavy - there really is a big difference between how she moves and how the other women move.

Also - I noticed that the more successful women dancers do a lot of posing.

Hope Solo does not pose. Hope Solo is on this show because she likes to party dance. And, this week, the judges appreciated that. So did our friend Abby. 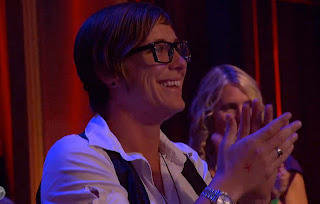 One of these days I will get back to soccer. I promise.