Last summer's Galaxy/Chivas match was fun to watch, even if it wasn’t the most beautiful version of the beautiful game.

It was a 0-3 routing – an uncharacteristic result, as the Galaxy have won most of the matches played against Chivas USA, the team with which they share the stadium. But Galaxy/Chivas USA is the best rivalry in MLS – Beckham’s arrival merely turns up the heat, letting Chivas USA be David to Galaxy’s unlikely Goliath.

Lost in much mass media coverage of Beckham’s arrival is the way that most basic terms of the conversation have already been determined by the received wisdom, that “Americans don’t play/watch/care about soccer.” It just isn’t true – and, worse, it obscures the existence of those who do. That sentence describes more accurately the wish that the sport had a different audience than the one it does – especially in the Southwest, where a very large portion of local fans are made up of Chicanos and Latin Americans, of long established communities and recently formed ones, from nearly everywhere. Mexican league games have drawn larger television audiences for Spanish language channels than, for example, Hockey’s Stanley Cup finals; premium cable packages come not only with dozens of movie channels, lots of NBA and NFL coverage, but a myriad of channels broadcasting nothing but soccer – in Spanish, English, and frequently in mixtures of the two - e.g Fox Soccer Channel.

Nobody really needs to “sell” soccer to American consumers – the market is already there. Nevertheless, on the surface at least, the MLS is plagued by insecurity over the development of the sport – playing its season, for example, over the summer (when international players are in demand from teams competing in trials and playoffs for the World Cup, or the Copa America, Euro, etc.) so as not to put US audiences in the position of having to choose between a Pistons game, for example, or the Columbus Crew.

In Los Angeles, any public park with open space has to manage the large and ever increasing demand for soccer fields – many parks respond with signs of stick figures kicking a ball, line drawn diagonally across and captioned with “No Soccer”. New soccer fields are booked months before they open to play. MacArthur park, home of the May Day demonstration for immigrants' rights violently shut down by the Los Angeles Police Department is an informal home to scores of games – from kids kicking the ball with their friends, to pick-up games, and

tournaments organized by local leagues. (The recent film “Goal” opens with one of these games). Lafayette Park, just to the west, is home to a small artificial turf field open for about a year, and already host to three adult men’s leagues (not to mention hours and hours of youth soccer), with games starting at 6:00pm (weekdays, 6am! weekends) and ending sometime after 11:00pm – at which point those of us looking for informal games take the field until as late as 2:00am. On a Friday night in the summer, you might watch Lempira play, a team of mostly Honduran locals (Lempira was an indigenous warrior who fought Spanish colonials - the national currency is named after him). They are strong, big, fast, physical. Or Alianza, a team of experienced players mostly from El Salvador (newly regrouped as Inter), and boasting an Olympian (Antonio Serpas) among their ranks. Or “Barcelona” — one of the youngest teams - lightfooted, lithe, and athletic, as one might expect, given their name. (My favorite name, from the Fall/Winter 2007 roster: “Resto del Mundo”) The field is walled in with a high chain link fence, and on good nights dozens of people may be lined along this perimeter– wives, girlfriends, buddies, kids, other teams waiting for the field. Pan back, and you see that this field is surrounded by a network of dirt patches home to as many as a dozen “kickabouts” – pick-up games of mostly – but not only - men and boys of all ages playing around palm trees and park benches, using garbage cans to mark goals.

Further east and to the north, on any given day, most of the fields at Ferraro Fields in Griffith Park are booked through 10:00pm – at best, a new team might rent the uneven patch of dust adjacent to the freeway at 8:00pm on a weeknight. On the better fields, you will find games for the LA Metro and Super Metro division, parallel women's leagues, tournament games organized by area churches, etc. (Again, I am not even touching on AYSO.) South Central – just about the last place in America some might imagine as populated by “soccer moms” — is home

to Compton United – local referees identify it as one of the most competitive and exciting youth teams in the city. Women play all over the city – on Monday evenings, the gorgeous 3G soccer fields at the Glendale Sports Complex, nestled in between the 2 freeway and a scrubby mountainside, are covered by women playing games of lung burning 7 on 7.

A comprehensive portrait of amateur soccer in Los Angeles would be a tome no less complex that the city’s population itself. I don’t wear my CF América scarf out all the time: Lots of El Salvadoreans live in my neighborhood, and hate Mexican League soccer, so it’s not a great way to make friends (which is why I keep my Tottenham hat in my pocket until I’m a good distance from my Arsenal supporting neighborhood – don’t get me wrong, I love Arsenal – but that red!). Better to choose a Barcelona scarf: Everybody loves Barça (except, I guess, in Madrid). Anyway, It’s easy to assume that Latinos prefer Chivas USA, but the reality is that lots of Latino fans route for the Galaxy over Chivas USA – partly because the Galaxy have been in LA longer, and partly because, well, Chivas Guadalajara is a team people love to hate. Beware: this crude youtube montage features the all too typical super lame homophobia of haters - largely in the form of "somos gay" scribbles across chivas team photos and insignia. This was one of the tamer montages I culled from a youtube search of "chivas haters."(See NY Times Blog on the subject of Chivas USA & La Galaxy). Chivas USA’s arrival in Los Angeles thus gave instant birth to the best rivalry in MLS – if you are from, say Hondorus, Guatemala, or El Salvador – or if your favorite Mexican team is anybody but Chivas, you may be more likely to support the Galaxy if not out of love, then out of hate. (Recalling Tottenham’s chant, “If you hate Arsenal, stand up!” – after yesterday’s game I can see how Tottenham fans might feel this way.) Even if Beckham’s arrival has drawn more of “Hollywood” to the Home Depot Center, it would take a lot more than that to marginalize Latino - or, in local futbol parlance, Latin - fans. 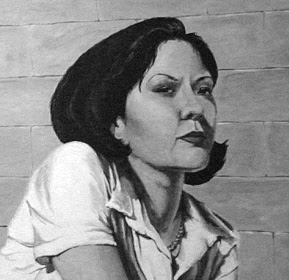 We have a perfect embodiment of the density of LA Fútbol culture in the eternally, queerly fascinating Morrissey - an out Chivas USA fan. For those not in the know, he's a huge icon for the Chicano Goth set - see, for example, the tribute band The Sweet and Tender Hooligans. (The image on the right, a reproduction of a work by the artist Shizu Saldamando captures the mood of this scene eloquently). Anyway, Morrissey apparently even offers discounts to his own concerts for Chivas fans. (What does this mean for his reported comments about immigration and England? How can this person be that person? See Dave Simpson's blog entry on this controversy for more info.)

Watching the Galaxy lose to Chivas (the Galaxy have won the overwhelming majority of these match-ups, and so Chivas fans seems to take particular pleasure from the win over 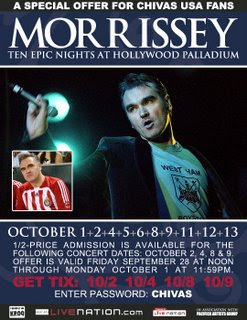 Beckham’s side), I couldn’t help but wonder if the British superstar (Becks) knew just how far from home he’d come. The following day was marked by a more ordinary experience – a sunset pick-up game under the skyline of downtown Los Angeles, in a park dropped in the middle of its industrial parts. Wedged between warehouses and a metro train track, this modest space (open about year) is now home to some of the friendliest pick up games in the city. It’s the kind of thing that seems hard to find in London – in spite of an abundance of green space. Maybe it’s California’s weather, a warmth that can expand into its culture – I saw women older than me kicking the ball around with guys, teenagers and younger kids out with friends and family, and my crew from Lafayette - not the culture of Beverly Hills, but the culture of El Resto del Mundo.