I put "sister" in scare quotes, because I can hardly imagine anyone with a lot of respect and love for their sister coming up with an idea like Hollywood United Girls Soccer - HUGS.

When I heard that Hollywood United - a team of Hollywood musicians, actors, and retired soccer players - many of the latter with international caps - had a sister team, I thought "cool!"

I of course pictured Joan Jett mixing it up on the field with the likes of Brandy Chastain and Julie Foudy. Alas, that is not what HUFC has in mind.

Again, this story begins one year ago on a Sunday afternoon. It involves a drive first into posh enclaves in the South Bay area, and then over to Crossroads in Santa Monica, which is a posh enclave in and of itself. The trip was my first foray into the HUFC universe - not to see them play, but to see members of the team play in an annual tournament in which ex-pats from England, Scotland, and Ireland play a team of Americans. It was a wholesome family affair sponsored by the British and Dominion Club of Orange Country. Those games were brutal - big guys going at it. Some were fun to watch, but it was mostly an inelegant game - as it would be, since the teams don't normally play together.

The highlight of tournament for me was meeting some of the women who play in the Orange County Women's Soccer League. As I walked over to talk to them, I felt myself being sized up. Not: "Is she younger than me?" "Is she prettier than me?" But a far more intimidating assessment of my fitness level. (I was also struck by their outfits - high waisted jeans, and expensive but very simple white shirts, understated gold jewelry. Official OC lady-jock kit?)

Anyway, we talked footie for a while - turns out they were heading into a 30 year anniversary for the league, which was been founded in 1976 - surely it must be one of the older leagues in the country, and I'm dying to learn more about the early days of its formation.

I was impressed, and a little scared of the fireplug manicured lady bulldogs from the OC. And I wasn't even watching them play - I'm sure they are very fierce (picture furrowed brows and ponytails whipping around like cat-o-nine tails). Soon the men's game ended, and I hopped into my trusty Honda to drive over to Crossroads, a private school in Santa Monica with a first rate 3rd generation artificial turf field. HUGS was playing in a co-ed tournament there, with some guys from HUFC.

The HUGS girls were really pretty - young, tan, wearing lip gloss and eye liner. They seemed really nice. One had even brought cupcakes. They wore specially designed outfits - not soccer kits, really - short shorts, tight shirts - all the better to serve their assets, which were in abundance.

They were about as fierce as a bunch of kittens rolling around in the grass. I shouldn't paint them all with the same brush, as one or two had some fire on the field, but in general, they were embarrassing. I'd say my own skill level was higher - and that isn't saying much at all.

Ian Carrington, the HUFC manager who told me about this game, was apologetic. But I'm not sure understood what he ought to be apologetic for.

Women athletes have to fight tooth and nail for any visibility (do you have to give birth, as did Paula Radcliffe, months before a marathon you win, in order for winning to NYC marathon to be newsworthy?). 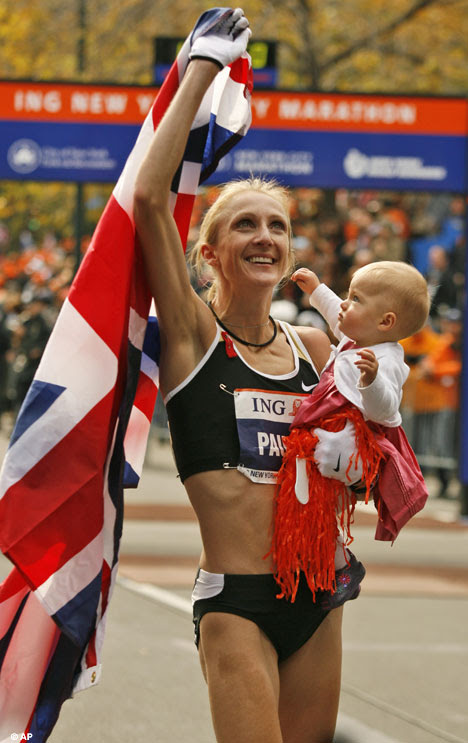 HUFC contributes to the problem when it recycles the worst aspects of the sexism that structures the culture of international football - in which women players are treated like a titillating side show. For points of reference - somewhat random: see Alex Bellos's discussion of Brazil's team beauty queens & pageants in his book Futebol, or, more simply, that nation's genuine shock that it should forward the most exciting women's side in the game; check out Bellos's profile of Marta - or, more interesting, see the story of Ronaldo's first wife, Milene Domingues. Sexism in traditional football cultures (e.g. England, Spain) is bad enough. It's bad enough that adult women who love the game can tell stories about being turned away from the game by the absence of opportunity, by outright discrimination. Or simply that girls in even the most developed countries don't get to dream about making a living playing their favorite sport - no matter how gifted they might be. Using the cause of women's football to cruise cocktail waitresses working in the crush of Hollywood & Highland is just plain sad.

I find the HUGS poorly written "mission statement", which asserts that this team of soccer babes will "bring soccer to the forefront of sports in the United States", unbearably ludicrous - insulting, in fact - unfolding in a parallel universe of men who could care less about the 2009 start up of an actual pro league, who think "Mia who?," who have no stake in the big questions facing the US women's national side. Perhaps the HUGS mission is meant to be funny? Which makes it all the more upsetting - girls playing soccer: How cute! How amusing! Their myspace page is even worse (e.g., the above image).

At least Arsenal and Tottenham have the sense to lend their names to real teams (although they don't have the decency to pay the players - a topic for another post).

That afternoon I found myself struggling to keep my feelings in, and struck by the fact that the culture of that swath of the amateur scene is defined by a deeply panicked version of masculinity - a strange weekend attempt to marshal whatever scraps of white male privilege are left in LA, and by the function of this team: with nary a woman on it whose skill level might give these guys something to think about - they are a fluffy bit of stage dressing, meant to shore up their sponsor's fantasy that they might still have balls.

Heaven forbid HUFC support the cause of women's athletics by sponsoring a team of women who might actually be able to give them game!

There's a story brewing in this: LA Galaxy president Alexi Lalas plays for HUFC - and Galaxy owners AEG will also own the LA based women's professional team for the new league - It's hard for a real fan of women's football to support any organization that spawns something as awful as HUGS. I would love to see Lalas withdraw from HUFC as a show of support for his real sisters, the ones in the game.