David Beckham is a lesbian icon.

That Beckham's charms are appreciated by straight women and gay men is a given. Beckham himself says he's "honored to be a gay icon", and, as the original metrosexual he has never been afraid of

flirting with the edges of officially sanctioned straight masculinity - sarong, painted toe nails, ballet slippers, etc. His appearance in an Armani underwear ad is only the most recent image advertising his willingness to appear as sex object to anyone who fancies the idea.

I stumbled onto this subject playing football with a great group of gals on a self-described lesbian feminist team. First time I showed up for training, I wore my Beckham Galaxy shirt - I wear it here with a sense of humor, understanding that people in London generally think Beckham's move to Los Angeles was crazy. As I took the field, I saw another gal also wearing a Galaxy shirt, number 23. It turn

s out that a lot of the women on the team really like Beckham - and don't hesitate to say that they are fans. I found that in this crowd I didn't need to pretend I was wearing that shirt with irony. My appreciation of Beckham is, to be honest, quite sincere - and is nearly enough to make a Galaxy fan of me.

In the locker room last week (we won, pretty much dominating the whole game, which was nevertheless kindof a slog on the Hackney Marshes), I floated this observation - that Beckham is something of a lesbian icon - and my teammates chimed in with a chorus of support for the idea.

He's of course loved by queer women for the same reasons he's loved by many football fans - for the kind of footballer he is. He's hard working, very sincere about the game, and he's capable of animating a team not through a lust for personal glory, but by passionately taking on the less glamorous work that happens in front of the back four: distribution, tackling, set plays, assists. He's the kind of player that makes other players look great and takes pleasure in this.

But he also "works" for queer women because the kind of masculinity he models is one he shares with some of our most compellingly queer lesbian icons (e.g. Le Tigre's J.D. Samson, pictured left). Beckham often appears boyish, openly sexual, and androgynous - and then there's his physical type - not beefy and lunk-headed (like Rooney) but lean, with fine features that always seem slightly at odds (in a tremendously sexy way) with his hard-bodied image. Even his reticence, his strange combination of

self-consciousness and self-awareness has a queer resonance (that shyness can precipitate global stardom was well born out by Andy Warhol). Some women want to have him, some want to be him. And some of us want a little of both.

boys I had crushes on when I was a kid, like Jackie Earle Haley. He played the archetypal "burn-out" "Moocher" in 1979's Breaking Away, and the motorcycle-riding pre-pubescent proto 'playa' "Kelley Leak" of 1976's The Bad News Bears - the latter also notable, of course, for Tatum O'Neal's turn as the ultimate 70s tomboy with the vocabulary of a 1940s sailor. [FYI: Tammy Rae Carland took on this constellation of queer stars (from Carter and O'Neal to young Jody Foster) in her 'zine "I (heart) Amy Carter" (included in the anthology Girls Guide to Taking Over the World). ]

That the charm of the adolescent gender-bender has stayed with Becks well into his adulthood is a minor miracle - most men who start out with it lose it by their late 20s (note the disastrous late adulthood of Scott Baio himself). With Becks, one might say it's gotten rougher around the edges - much in the same way that it does when our androgyne sisters jump the fence and go 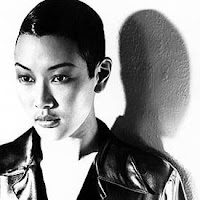 Women on this planet of queer masculinity might include Daniela Sea, of L Word fame. She has this boyish charm in spades. Or, let's look at the more notorious model Jenny Shimizu. Shimizu is a particularly good point of reference for the sort of planetary pull such women exert - and which they direct more specifically at high-femme/ drive-you-crazy women like her ex, Angelina Jolie, or, the less famous but no less notorious genius Gwen Turner - Queer Hollywood's Dorothy Parker. 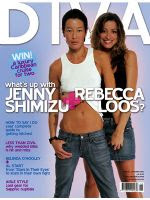 The truly crazy connection here: Beckham's infamous ex-lover Rebecca Loos has not only gone on record as bisexual - she married Shimizu in 2005 for a Logo TV program called Power Lesbian UK. Check out their Diva magazine interview.

Beckham's partnership with Posh - puzzling to so many - mystifies me not at all. One of the 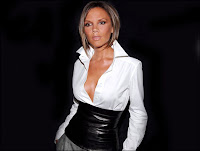 reasons he is so often pilloried by male journalists & intellectuals is this relationship: they can't stand that Beckham lets Victoria dress him, paint his toenails, that he's tried on her underwear, and, basically, lets her "top" him a thousand ways to Sunday, and, worse, that he's proud of it, too. I've found myself defending Becks to the most liberal of men - to leftie academic metrosexuals who pr

efer George Best to Becks, seeing in the latter a betrayal of the masculine ideals of the former.

I've never taken Posh & Becks more sexual photographs (in which he's often pictured dominating her, as in the recent W spread) to mean much about what happens between them privately - her penchant for leather, vinyl, lace-up, corsets, and lethal stillettos says it all. She's a high femme top, surely. And that sort - the ones who want the bling, like their men to light their cigarettes, open doors for them, to buy them lingerie and expensive handbags - these are the women old fashioned boy butches seem to adore.

And, finally, by way of conclusion, a gesture towards a queer reading of Posh and Becks: That Armani underwear photo has prompted global speculation: Is it real? Is that really his? Posh, pictured here wearing a very leather daddy hat, has also been at the end of that question (are those really hers?). She gave a great interview about the ad, and gushed about loving seeing

her husband's penis "25 feet tall" on a billboard, and has been the single greatest engine for publicity supporting the mythology of Becks'

package (check out this old Ali G. interview with the two of them). The pair are so over the top, so playful about themselves, they deliberately tickle our curiosity about the line between the natural and the artificial - Posh makes a more than passable drag subject, and Becks has got to be the model for kings out there. I don't know anything about Australian drag king Jonnie Swift (pictured here in the dressing room getting ready with Sexy Galexy for the 2005 Sydney LGBT Mardis Gras) but he looks to me like Beckham's gay brother.

By way of an afterthought: Check out this great take from youtuber "Beaner LaRue": "Posh" explaining that the Armani-clad bulge really really is "100% his little Beckham":