The Interior Life of the Substitute

I watched the Women’s World Cup final with my aunt in her living room. (Pictured here, Brazil's Christiane fighting off Germany's Linda Bresonik.) I watched the semifinal match between Brazil & USA in a sports bar in France. . I caught the televised second half of the 1999 final in Pasadena, but I don’t know where I was, or how I happened to catch it. I do remember that I kept switching channels, because the tension was too much - scoreless, the game famously went to penalty kicks, and the tension of watching that was excruciating! Watching the 2007 games was qualitatively different – because in between 1999 & 2007 I started playing.

The experience of watching soccer on television is much more intense now that I play. When I watch now, I have very mixed feelings – I get caught up in the drama of the match, of course, but I also wish deeply that I could play like the people on the screen. And I want to be playing at that moment. 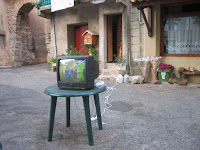 That desire can be so intense that my body begins to very nearly act like it’s playing – I’m like a sleeping dog dreaming about chasing rabbits. My feet are restless, my legs want to run - the most powerful sensation of watching football is this feeling of being physically hailed by the game. This is even worse at a live match – if I’m sitting near the pitch, it’s all I can do to restrain myself from jumping onto it.

This experience is new to me. I suppose this is how lots of people who play must feel about watching – enthralled, caught up in it, there, but hyper aware too that they are not there. The embodied memory of playing is a complicated gift: It gives you both the ability to feel what it feels like to play (and thereby get even more involve with the action), and an awareness of the real difference between you and the those on the pitch.

I am ashamed to admit that I really thought that watching sports was a relatively passive thing – but watching a soccer game is a lot like watching a really good suspense film, or reading an engrossing novel. Time seems to stand still and race by, you forget you are where you are, you are instead projected outwards with your interest – you are in the stands, on your couch, but somehow not. Somehow, you are there. Your heart races, palms sweat – watching a great game is almost unbearably exciting. But behind all of that excitement is a bittersweet sadness about that gap between us and them.

Sitting on the bench must be just awful (right: goalie Hope Solo, famously benched for the 2006 WC semi-final match mentioned above). I don’t have a lot of experience with this, as most of my league experience has been in games with unlimited “rolling substitution”, so you come off to catch your breath, and go back on when someone else begins to tire. (Using rolling substitutions well is itself a fine art.) But sitting on the bench as a highly skilled player who lives and breathes the game must be a real test of character. How not to sour? How not to get bitter and resentful? How to stay loose, and positive? Because the darker your mood, the more likely you are to stay on the sideline. Your bitterness would make you more and more static, and make you more and more leaden. You would become a stone.

Fred Poulet and Vikash Dhorasoo (pictured left, fighting off the hardest working man in show business, Franck Ribéry) explore this awful dynamic in their collaborative film Substitute about Dhorasoo’s time on the bench during the 2006 World Cup (film still below right). It’s an incredible document – started with no idea that Dhorasoo (who played in all of the qualifying matches leading up to the world cup) would serve the team as a sub who never takes the field, or that France would advance all the way to the final match which would then become famous for Zidane’s startling “coup de boule”.

We experience that amazing summer isolated from everything that made it amazing – security is very tight, Dhorasoo can’t film training, etc. – so he keeps a personal diary of sorts, measuring his

increasing depression and resentment, as well as a heroic effort to keep those feelings in check.

And with that, below is a rather melancholy youtube homage to M. Dhorasoo - set to Velvet Underground's "Sunday Morning". I think this footage is from a 2006 classic match between Paris St. Germain & Olympique Marseille - Dhorasoo's was the winning goal, and I'm pretty sure it was delivered on a Sunday.

Postscript: Weirdly, I posted this the day after Dhorasoo announced his retirement. L'Equipe just published a really interesting interview with him, in which he speaks a little about the events surrounding his controversial dismissal from PSG (and, pointedly, about his disappointment about his teammates' failure to support him). There's a lot more to say about Vikash Dhorasoo - about his independence. Take his sponsorship of Paris Foot Gay (a men's team not all that dissimilar in political spirit from Hackney Women's FC - it's a gay team with a anti-discrimination policy - I will complain, though, that their site seems really disinterested in women's football - whose struggles are shaped by sexism as well as homophobia), and his readiness to speak publicly against all forms of discrimination and small mindedness - something I think is often congenitally linked with an inability to be totally strategic in one's personal navigation with oppressive institutions. I can so relate. Bleus blogger Laurie has a long standing mild obsession with Dhorasoo (she's even more footie obsessed than I am). She sent me the L'Equipe interview - thanks!