Canaries in the Coal Mine: Brazil in Beijing, Great Britain at Home

It's been observed that the Brazilian women's football team could use a little luck. They've been *nearly* to the top in some huge games, including the finals for the 2007 World Cup (they lost 2-0 to Germany) and 2004 Olympics (2-1 to the US in extra time).

But, alas, at the Beijing Olympics As Canarinhas find themselves in the group of death which includes two-time World Cup champions Germany (their first opponent), very solid North Korea, and the talented Nigerian side - the latter is the best African women's team, with a lot of desire and a lot of women playing in European leagues (this may be the group in which more players have experience playing with and against each other in their club sides).

The top two teams in each of the three groups advance, as well as the two best third place teams. In Group B that should be Brazil and Germany. If Brazil holds their own against Germany in the opener (August 6), they might take the whole thing - you can make your own luck if you have the confidence, and a good performance against Germany could shift Brazil's sense of itself as the perennial underdogs. 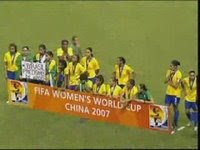 For a good introduction to what's at stake in that opening match, check out this video (from ole ole) of the award ceremony closing the World Cup: You'll get a briefing on the best players of the two teams. You will also see the Brazilian women holding up a sign that says, in Portuguese, "We Need Support" (at about 12:20) as they file past FIFA officials and pose for the cameras.

In this October 2007 post New York Times blogger Jeff Klein describes a letter sent by the women to their national federation after the World Cup (you can see it here on O Globo's site). It responds to their federation's public statements of support for the team given their outstanding performance in the 2007 World Cup. The women point out that the federation made similar promises in 2004, when they nearly beat the US in the competition for the gold medal, and that they had still not been paid award money from their win in the Pan American games. They point out how little money they earn as a per diem, and the lack of staff support for the team. Like perhaps a majority of women involved in the game (especially outside the US), the players were quite cynical about official statements about the federation's interest in their game - they'd heard it all before.

The story of their team is incredible, and it is the number 1 reason why every football fan regardless of gender should give the women's game some of their time this summer. Imagine growing up in the country that loves football the most - where futebol shapes the texture of every aspect of one's life. Where playing futebol offers one of the richest senses of pleasure and belonging available to you. Where the lore is that of the child from the favelas who becomes a god rich as Croseus and known the world over by a single name. And, you are the best player anyone has ever seen.

But you are a girl! There's no league system, and during your childhood there is not even national team. Growing up, you've been told that playing football will make you look like a man - it will make you ugly. You don't know the name of a single woman player beyond the odd girls in your own neighborhood. Take being a black athlete in a racist culture and, say, square that if you want to grasp how hard it is to develop your talent. You don't even have segregated games to turn to. You are vulnerable to every violence prejudice has to offer. You don't give a shit, because you are a genuine freak. It makes you tougher. You love the game so much, and play so well, people forget you are a girl. People play YOU. It's a great feeling. You play with boys until local associations force your manager to take you off the roster - something the manager is loathe to do, because you are so much better than the rest. Which is, of course, why they noticed you were there in the first place.

The shitty thing for girl footballers world over is that you can get away with playing on boys teams - as long as you don't offer them any competition. The minute you do, they want you off the pitch. God forbid you should be the best player that local league has ever seen. In some contexts, having that kind of talent as a young woman footballer is like having a target around your neck. It's a gift and a curse. But by some outrageous combination of good luck and blind determination, you end up playing in a different environment - like Sweden - where your talent is both accepted and nurtured, and where playing football as a woman doesn't carry quite the stigma it does elsewhere - like, say, in England. But, now you play in the snow. A lot of the women in the Olympics have this kind of story - Marta's story being the most famous (for more, see Alex Bellos's Observer profile).

Women's football isn't just not supported in many countries - it's undermined by national federations for whom managing the game is more about keeping women in their place than it is about celebrating their football culture as it is embraced by both men and women.

On this point: at least the Brazilians are IN the Olympics. We can't say the same for England - who had arguably the best game in the 2007 World Cup against the eventual champions (0-0 draw in an early match). The top three European teams in the World Cup should have gained an automatic place in the Olympics, but the disorganization of the women's game as it is managed by national associations led to England's exclusion.

The Football Associations of Great Britain (N. Ireland, Scotland, England, and Whales) have been in dispute about forwarding a GB squad. The problem involves baroque conflicts between the FIFA and Olympics rules (see this BBC story), and issues relating largely to the men's game.

Even with reassurance from FIFA that the formation of a Great Britain squad would not jeopardize the status of, for example, Scottish internationals, the FAs refused to cooperate. Because of this, the women playing in the United Kingdom can't participate in the Olympics (for more on this, go here). The impact of this is much, much bigger on the women's game of course. An Olympic team benefits from lottery money (see this Telegraph story). Had these FA associations supported the team's bid, these women might have actually been able to play football for a living. Former British Sports Minister Richard Caborn railed against the injustice of this: "That these nearly all-male organisations can deny their women footballers the chance to play in the Olympics is beyond belief." Glad he said it, so I don't have to.

What does this have to do with the Olympics? English women play in a very competitive league and, like Brazilian women, live in a culture that lives & breathes football. A large portion of the English national team plays for the same club (Arsenal) and know the world's top players because half of them play in Europe. They had a much better shot at medaling than most of the teams in Beijing. It shows how the limited commitment from national organizations is a giant drag on the development of the game.

Returning to the teams that will be there: I am rooting for Brazil because they are willing to do something like carry a sign displaying how angry they were when they walked across the awards podium. That wasn't just for them - that was for all the women in their country who have talent and want to use it. And they might as well have been speaking for the Lionesses as well, who made similar complaints to the FA about the shameful support they got on their own World Cup bid. [I should add here that at the end of the 1990s, after their 1999 World Cup victory, the US women's team leaders organized a strike in protest of the poor support they received, especially when compated with the men's team, whose record was never as good as the women's. See this 2000 New York Times story for a description of the "boycott" - i.e., strike - and an explanation of how it was resolved. A nice detail: In Dare to Dream, the women recall turning to Billie Jean King for advice at key moments. - JD, Aug 1.]

As Canarinhas didn't hide their disappointment at losing to Germany with fake smiles. They don't feel grateful just for the privilege of being there. They feel entitled to the big trophy. Call me crazy, but I think that attitude is a good one. I like seeing women go crazy when they win, and look visibly pissed off when they lose.

Nobody just gives you what you want and need: You have to know how to ask for it, work for it, and sometimes you just have to take it because no matter what you do, people don't think you should have it. They are bad ass footballers, through and through. It's high time they took a champion's medal home. Or back to Sweden.