Rudy y Cursi is a satire of the buddy film. The brothers love each other. They hate each other. They can't live with each other, and they can't live without each other. Cuarón's film parodies the clichés that define the cinematic adventures of rivalrous "odd couples" - think Lethal Weapon, or, more recently, Harold and Kumar. The buddy movie is possibly the most anxious of Hollywood genres as these stories of male bonding and intimacy often have to go a great distance to generate heterosexual alibis to reassure audience members that the love these men feel for each other is, uhm, not gay. (Thus the presence of otherwise completely forgettable female characters - cardboard cut-outs usually played by actresses with minimal celebrity so as not to distract from the actual characters in the films - Rene Russo breaking the mold with her star turns in LW 3 & 4. See "Male homosociality and the buddy movie" for a more scholarly take than I offer here and see "Isn't It Bromantic" for David Fear's great comment on the topic.)

Rudo y Cursi continues the line of thought initiated by Y tu mamá también. Carlos Cuarón wrote the script for Y tu mamá también with that film's director, his brother Alfonso. The earlier film explores the blurry lines of intimacy and desire that define the friendship between its central characters Julio (García Bernal) and Tenoch (Luna). They share girlfriends, they get off together in dreamy afternoon masturbation sessions, and it all changes when they go on a road trip with an older woman who is absorbing the news of her cancer diagnosis and leaving her philandering husband. She seduces one, then has sex with the other. (If their inexperience with women wasn't clear to the audience at the film's outset, it is painfully obvious in these scenes.) The two friends argue with each other, and she puts an end to their bickering by seducing them both at once. The suggestion is that this is what they've wanted all along, but they needed the road trip and the magical presence of a dying older woman in order to make it happen. 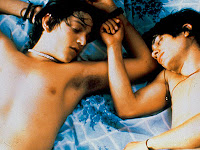 There's this incredible moment when she dips down below the frame of the camera, and the two embrace in a passionate, sensual kiss (I can't remember if we see them make out, or the the film cuts away just before contact). They wake up together, and things are weird. They go home, their friendship falls apart as do their relationships with their girlfriends. The woman who surfaced their desire for each other dies - her death is not shown, but told to us in a coffeeshop conversation between the now former friends. (Hammering home the fact that she was always, in essence, a plot device.)

Rudo y Cursi feels very much like a comedic followup to that film.

What makes it a satire of a buddy movie (rather than just a buddy movie) is its sustained parody of the homoerotics which animate the genre & its macho sentimentality. Rudo y Cursi is unusually self-aware in its send-up of homosociality - of spaces like the soccer team's locker room, which is, in this film, barely a half a step away from being a gay porn set. The coach for one team is a closet queen. The brothers are full of feeling, clearly in "love" with each other (a love made safe by the story which sets them off as brothers), and totally incapable of functioning without each other. The women around them are props - they are far too wrapped up in each other to really notice what the women in their lives want or need (an ignorance that Beto/Cursi's girlfriend exploits ruthlessly). All the male athletes in the film constantly grab their crotches - in part because the brothers are hazed by teammates who gang up on them in the shower and shave their balls. These scenes in and of themselves don't make for a parody - buddy films are rife with testicular jokes and locker room humor. It's the tone, the weird and soap opera sweetness of it all that makes these scenes feel more interesting than phobic - as if the film goes just a little bit farther than is usual - perhaps because it is a lot less anxious than we are used to.

At the end of their misadventures, the two brothers are together - more or less back where they started, as the film's odd couple.

The term "homosocial" describes social relationships between people of the same sex - relationships that are usually defined against the sexual/romantic. But as scholars in gender studies have pointed out (most famously, Eve Kosofsky Sedgwick), male homosocial relationships are shot through with anxiety about homosexuality, and so expressions of romantic desire, tenderness, and affection between men are policed with a particular force, and women are drafted into the story to, uhm, keep things from, well, being gay. Thus the bizarre way "women" are integrated into men's soccer - see the Chivas Girls and this bizarre footage of the LA Galaxy's fan section waving blow-up dolls dressed like them. The awkward integration of sexualized images of women into these scenes serves one purpose, and one purpose only: to make these guys, who spend a good portion their lives worshiping men as fans, hanging out with men talking about and looking at men, feel straight.

Both Y tu mamá también and Rudo y Cursi explore how male friendships traverse the line between the homosocial and the homoerotic - or, perhaps more accurately, the films experiment with how far you can go in eroticizing homosocial relationships before all parties panic.

As evidenced by this interview (see clip below), Diego Luna (fresh off his turn in Milk) and Gael García Bernal (who was outstanding in Almadóvar's La mala educación) seem to enjoy the beautiful game of keeping these things in play (as host and audience laugh awkwardly).