Rudo y Cursi: From A Left Wing Goes to the Movies

Rudo y Cursi, Carlos Cuarón's comedy starring Gael Garcia Bernal & Diego Luna is as much about soccer as Footballer's Wives. It is less a sports film than a parody of fútbol culture - of everything that the game produces around itself. But where the British television series marries the drama of the spoiled and fabulously rich characters who grab headlines across the world to the cheesy glamor of a nightime soap like Dallas, the film by the writer of Y tu mamá también marries the texture of ordinary fútbol culture (the weekend warriors, the alternately bored and enthralled cantina audience, the throbbing stands, the pipe dreams of day laborers) to the low-tech histrionics of a telenovela like María la del Barrio.

To everyone's credit, neither Luna nor Garcia Bernal try to pass themselves off as "real" footballers. The film opens with Tato "Cursi" (Garcia Bernal) taking a penalty against his brother, keeper Beto "Rudo" (Luna). There is no attempt to make this confrontation look like a face off between athletic giants.

The only time we see them acting like wizards on the ball is in obviously manipulated video footage which appears on screen when a character watches them on television. I swear one clip of Cursi dribbling past a tight cluster of defenders looks like a well worn bit from a Maradona highlight reel, and Rudo is shown playing with the sure hands of Petr Cech.

Throughout the film, the game is studiously kept off-camera - often with great comic effect. When Cursi takes the field for his try-out with a pro team the camera stays on the scout and the coach, who negotiate the coach's cut from the touchline. The back end of the goal's net can be seen on the margins of the screen, bulging again and again with the ball as Cursi, completely off-screen, scores at will. When we do glimpse Luna and Bernal playing on television, it's so obviously fake that it's hilarious. Cuarón's handling of the sport spectacle points to our readiness to believe that this aging wannabe pop star and his brother, raised on and harvested from a banana plantation, can play for a professional team.

Although some viewers might be annoyed by film's refusal to pretend that Luna or Bernal can actually play like professionals, this very thing - the amateurishness, the ordinariness of the football playing we do see - is what actually made the film more than a simple comedy.

It is no accident that the film ends with the scout (who narrates it) returning to the dusty fields of no-place, where beat-up amateurs are playing. This - the scrappy patch of dirt on which people play after working themselves to the bone - is really where the film's heart is located. This space of free play is exactly what everyone is really after, in one sense of another. 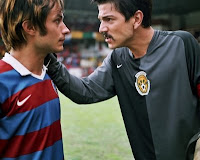 After the screening, I asked Cuarón to speak a little about the games he plays with Luna & Bernal and what positons they play - I read somewhere that they've had a long standing friendly kickabout. He claimed that they all seem to have pretenses to being strikers. Cuarón asserted he was the only one of the three to have any such talent.

I wanted to ask a more serious question, but a promotional screening hardly seemed the right place to explore the following: One of the film's subplots has Rudo's wife working as a distributor for Wonderlife (an Herbalife-like company). This is obviously a dig at Jorge Vergara, the owner of Chivas and president of Omnilife, the Mexican Herbalife. (Vergara, it should be said, was one of the producers of Y tu mamá tabién.) This plotline is plainly intended to comment on this kind of exploitation of the desires of the working poor for economic independence. (This site - in Spanish - surveys those moments in the film which take on the 'multinivel' scheme.) At the screening in Los Angeles, I wondered if Cuarón was at all aware of the presence of these multi-level marketing companies in professional soccer in the US, and Herbalife's involvement with AYSO (see my April 30th post on Amway's sponsorship of the LA Sol). In those pacts made between the companies that own US soccer and their most visible sponsors in this region, we see a cynical avowal of the kind of money to be made off of the soccer fans persistently ignored by mainstream media.

As funny as Rudo y Cursi is, it cuts awfully close to the bone in its parody of the pipe dreams of the disempowered. (Oh, the strained laughter in the Los Angeles audience at Cursi's first articulation of his desire to go to Texas - where he knows a guy working at a radio station - so he can be a pop star. It's hard to pretend sophistication in relation to such dreams when you are literally two blocks from the Capitol Records building. And just down the street from Scientology's sprawling campus.)

Rudo y Cursi (which translates roughly as "tough and corny") doesn't pretend that the brothers' fantasies of easy money are anything but avenues of exploitation. These dreams allow them to be hooked into the schemes of people just slightly higher up on the foodchain, like the "scout" who brings the brothers to Mexico City and plugs them into professional teams where more people can take a cut of their pay. (The film implicitly draws a parallel between this kind of corruption in soccer business and the multinivel Wonderlife.)

Characters dream of making millions playing soccer, of becoming pop stars, or, more modestly, of "owning your own business" (the dream of Rudo's wife when she signs on as a Wonderlife rep). Nibbling at the edges of the comedy of Rudo y Cursi is the grim reality of precarious living, from which these day dreams provide at least an illusory scrap of relief. On this point Rudo y Cursi approaches satire - no one gets off easy in this story except for the Narco criminal, who swoops in to save the day by marrying Rudo y Cursi's sister, and providing their mother with the beachfront mansion her feckless sons could never manage to build for her.

Stay tuned for post number two on this film - in which I tackle the film's homosocial/homoerotics.