The Damned United: A Review 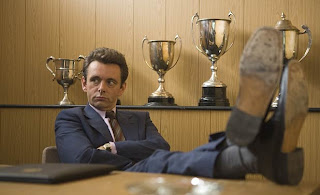 Dirty, dirty Leeds. Dirty fucking Leeds. After reading David Peace's novel The Damned UTD these words cycled through my head for days. They work as an obsessive refrain in Peace's account of Brian Clough's infamous 44 days as the manager of (dirty, dirty) Leeds.

I knew nothing about Clough, Leeds, and this bizarre story before reading Peace's novel - that I enjoyed the book, and felt as if Clough himself, in all his puerile genius, had wormed his way into my head is as good a testimony as I can give to the intensity and distinctiveness of Peace's writing.

Like any fan of a novel, I reacted to the news that it was being turned into a movie with suspicion. In the movie theater, a couple near me asked if this was a "sports movie, you know, like an underdog story." The answer to this is, No. This is a story about a guy who was an underdog when he took over Derby County and led them from the bottom of the second division to the top of the first in two years. (Imagine!) When Don Revie, manager of Clough's hated Leeds UTD, was promoted to England manager (a job Clough wanted, but never got), Leeds asked Clough to take over the storied side. Which he did, and bungled - he was sacked after 44 days of antagonism and controversy. He was an outsider at this point in his life, sure, but he was already pegged as a football genius.

So, there is no underdog in this story - no glorious win. Just the story of an impudent, self-centered (gifted) bastard so driven by hate that he takes over a team in order to take them apart.

The film is gentler than the book. (A film which stuck to the maniacal tone of Peace's writing would, in fact, be almost unwatchable.) The screenplay splits its time between Clough's Oedipal struggle against Revie, and his friendship with his partner, the coach Peter Taylor (Taylor refused to move to Leeds with him). Their relationship is explicitly cast in terms of love - the film plays with their dynamic as a couple, and this is where any of the tenderness and emotion in the film is expressed.

I loved the film. But I also love English weather and Thomas Hardy novels. It's visually gorgeous, but everything is gray, wet, and dilapidated. If there is paint on the walls, it's peeling. If there is wallpaper, it's greasy. Glass is grimey. Fields are muddy. Ceilings are low and stained. Early on, there is a lovely scene of Clough, desperate to impress, trying to tidy up the facilities at Derby before an early match against Leeds - polishing tarnished brass, scrubbing blacked grout. Even the football is dirty - all I remember about the games in the film is mud, rain, and blood.

Given this, that refrain "dirty, dirty Leeds" takes on an added importance. Everything around Clough feels shabby and worthless when compared to what Revie has. Clough is more boy than man, invested in a recognition (from Revie) that he'll never get (Revie refuses the hand Clough offers him, not in a deliberate slight but because he didn't notice Clough, who was cloaked in insignificance). As we watch Clough trying to scrub away the dirt of a working class world (his world), we see a man who on some level feels he will never be good enough, a man incapable, too, of being happy with what he has. And of course, this restlessness, this discontent was behind the arrogance and ambition that made him such a legend.

[I expanded this review for Pitch Invasion - you can read the revision here.]