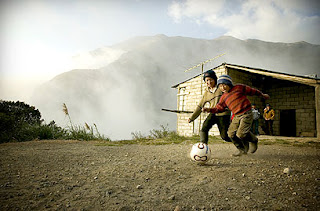 "The Golden Age" is a Queens, NY league of mostly Latino players over 40 - it is also the title of a brilliantly filmed and edited documentary celebrating the global game and its particularly migratory character within the US. The film makers manage to capture the skill and energy of the players who slog out their season in Corona Park/Flushing Meadows, on the grounds of the 1964 Worlds Fair - I have never seen a documentary about the grassroots game that actually captures what it feels like to play and participate in a league like this one. And the documentary fleshes this out with terrific portraits of la cultura futbolística in the countries in which many of these guys grew up (Chile, Paraguay, Colombia). In many ways, the hour-long film is a pure luxury. You can watch it at voces.tv.

The film-makers are the first to confess they don't speak Spanish - and this makes me wonder if this isn't in part why the league drama with which the film ends isn't explored in more detail (most of the league's teams walk out of the playoffs, accusing the league organizers of favoritism and corruption). Speaking from my own experience (which includes this linguistic limit), local leagues are tough, dense and complex scenes - we certainly glimpse this in The Golden Age, and it's where the rose colored glasses begin to slip off. This is where tougher stories emerge - these leagues are sights of incredible social stability for people living in increasingly precarious conditions, they are the platforms for consciousness raising and community building, but they are also sites of petty exploitation and steady conflict with, oh, nearly everything one might expect (park officials, property developers, ordinary greed, group dynamics). But these points are made by a viewer who really just wanted more, more, more. [Just learned that the film on voces.tv is a short version of a feature length film - this explains a lot!] It is an achingly beautiful portrait of the grassroots game and the pleasures it offers its players. 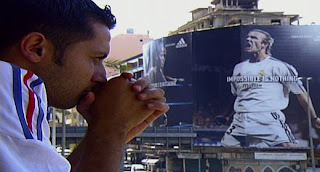 Goal Dreams (2006) follows the Palestinian national soccer team as its organizers try to pull a team together for a 2006 World Cup qualifying match against Uzbekistan. There isn't much to romance in this story. Players are pulled from all over the globe (Chile, Kuwait, Sweden, Lebanon, the US). They train in Egypt, where they wait for a dozen players from Gaza who are held up for weeks as they are unable to cross the border. Because movement between the West Bank and Gaza, and between cities on the West Bank is nearly impossible, putting a team together from within Palestine (which, furthermore, had no league at the time) seemed unthinkable.

This is a sobering film of a team with next to no resources - as much as one wants to make an uplifting story out of their plight, you can't. As the film progresses, the enterprise takes on a depressing hopelessness - players show up looking glum and the Austrian coach asks "where's your smile?" The Palestinian players tell the translator that five of their friends were killed in an air strike during the night.

Players talk about the impossibility of playing together on a team where the language barriers are so intense - the Palestinians from outside the region were born and raised in Latin America, Europe, and the U.S. and have no common tongue. Players from Gaza and the West Bank spend weeks in limbo waiting to cross the border while their teammates train without them. There is a cringe worthy sound bite from FIFA chairman Gerome Campagne who explains FIFA's refusal to postpone the match against Uzbekistan with these words: "What is important is [for FIFA] to not be mixed up in political issues." FIFA, furthermore, only postpones matches when there is a "force majeure" - the occupation of Palestine and the nightmare it produces for its citizens is not, in their view, a "force majeure." In the end, after Isreal delayed half the team's departure from Gaza, and then refused to allow exit visas for a number of players, they lost 0-3.

The team's organizers have reconsidered their whole approach. Until very recently, players still couldn't train or play matches in Palestine - and even now, with a home stadium, negotiating travel to this stadium remains an obstacle. But the current roster consists largely of Palestinian players from within the country, and the team - as well as Palestinian football - seems increasingly stable. Or at least more stable than it had been, which isn't saying much.