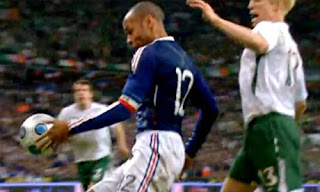 The ball rebounded to Thierry Henry's hand, first once and then again. He scooped it gently, and let it fall to his feet. He made a controlled pass to his teammate William Gallas, who scored a much-needed goal against Ireland.  The referee didn't call the handballs (clearly visible in recordings of the match). Henry didn't ask him to. And Ireland are out of the World Cup.

The LA Times is running a poll, asking readers what they think FIFA should 'do' about Henry's handball.  It's a somewhat typical response: there must be one agent responsible for evil, a clear solution to a problem. Lambert is responsible for shaming the women's game (and not the referee, coaches, and the players on the field whose passivity allowed all that to happen); Thierry Henry is a "cheat." The demand for Henry's head - or for his hand - makes for good copy.

For something a little more complex, see The Guardian's interview with Irish sports journalist Barry Glendenning (one of a slew of articles on this subject, representing a range of perspectives). Of course "we were robbed by France," in a move that "would be illegal even in basketball," he comments. (Is he referring to the double-dribble?)  Henry is shown describing the handball frankly in a post-game interview (transcribed in French here). Where the American press casts his statements as "unapologetic" European journalists see it more nearly as "frank" and "honest."  Of Domenech's support for Henry, Glendenning says "If any Irish player had done the same, I'd fully expect the nation to be 100% behind him." He also points out that Henry's image has already been so compromised by his "previous chicanery" that this incident can hardly be said to be all that damaging to the star's reputation.

"Cheating" is an art in this sport. Everyone is of course remembering Maradona's "Hand of God" goal.  Maradona discussed it in an interview for the BBC: "This is something that happens...I have scored goals in Argentina with my hand." He goes on to explain exactly what he did, and how he "sold" the goal to the linesman. (The Guardian's Richard Williams minimizes Maradona's intentionality by calling it a "street kid's instinct" in his column chastising Henry from whom he expects better given his relative "sophistication": This is wildly classist - a fantasy of a pan-Latin 'favela' - and totally ignorant.) There are myriads of smaller incidents - daily actions in which players exploit the deeply subjective nature of some of soccer's most fundamental rules. Handballs, offside calls, the identification of goals and the discounting of goals, calls for aggressive tackles and diving  - all are made by referees without the help of video replay, and are vulnerable to human error and players know it - and the most competitive exploit this.  It becomes part of your game.

The French press sees the handball as representing a larger crisis on the squad stemming from the limits of Raymond Domenech's stewardship.  (For a taste of the mood regarding the national squad, see this match report - "Voyage au bout de la nuit" - from So Foot. It opens with "Blood on the dance floor. 5 minutes of play and the face of Julien Escudé, taking the place of Eric Abidal, is already cut open after a run-in with...Patrice Evra. The tone of the match is set. The Irish have already invaded the French camp.") The European press (and the soccer-blogging community) wonders why on earth France holds onto Domenech. France has at its disposal one of the most talented populations of players on earth - French athletes are stars in squads of stars, playing for the best clubs in the world.  And yet as a national team they limp along and seem increasingly disaffected. If the French public turns against Henry (and it has, again and again), it's out of a broader disappointment with a side whose fate turns on such an ugly incident.  Who wants to win this way? Well, the people who want your money.

Eduardo Galeano described 'the history of soccer' as a 'sad voyage from beauty to duty.' That 'duty' is paid to the sports 'telecracy,' which demands that its 'functionaries specialize in avoiding defeat.'  If Thierry Henry didn't, say, clear the ball from the goal (which would have been so chivalrous as to be completely scandalous), if he played the ball to his feet and passed to Gallas, he was being a good employee.  And it is ridiculous for us to expect anything different - if you want an honorable game, you are far far more likely to find it in a neighborhood park than you are on your favorite sports channel.

This morning a friend reminded me of Albert Camus's famous assertion: "Ce que je sais de la morale, c'est au football que je le dois." ("What I know of morality, I owe to football.")  This statement has been interpreted differently by sports writers - to suggest the clarity of moral obligations within a team, or to suggest the moral ambiguity of football.