The World Throws Up: On how not to read soccer as symptom 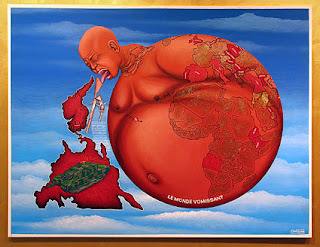 Chéri Samba, Le Monde Vomissant (The World Throws Up), 2004
If recent writing on the 2010 World Cup and (the idea of) Africa is leaving you feel bloated, you must read Supriya Nair's marvelous blog, Treason Stratagems & Spoils.  In her July 3rd post, she calls out western media pundits for their tendency to see in each African soccer team (and, indeed, in each African or non-European or non-white player) a tidy study in "the African problem," the "problem of history", and the "problem of nationalism".

I cite one part of her blog below because I've been looking for someone to properly check the liberal impulse to read in Mesut Özil a redemption of Germany's policies on immigration and citizenship.  Nair's eloquent rant was triggered by Roger Cohen's op-ed piece for The New York Times, which centered on Özil's symbolic meaning ("Özil the German"). Before discussing the Turkish German player, Cohen gives an overview of, basically, Africa's "problems" - in history, politics, and soccer. It's all about the "Big Man," he argues, and national soccer teams do well to avoid them. Nair takes him to school for that, and moves on in her critique. To Cohen's assertion "But the Germany of Özil and Aogo is such a victory over the Big Man who destroyed Europe." Nair replies:


Which is to say, thank you Turkey and Nigeria for bearing the brunt of the history of European imperialism in your own distinct ways. Directly or indirectly, we dismantled your countries in our world wars, plundered your resources, broke up your nations, sold off the pieces, put your worst enemies in power over you, treated your people like shit when they came to Europe looking for work, and continue to do so. But our football teams are now full of brown kids and black kids. So Hitler lost and you lost, but we all won. So we're cool, right? We're cool.

I encourage readers to go to her site and read the whole thing ; "When I Get Older," Treason Stratagems & Spoils.

Writing like Nair's is, at the moment, only found on blogs like the one you are reading right now. Newspapers, stuck a fantasy moment of the 1970s, turn over and over again to people disconnected from the game, people all too happy to project political fantasy onto whatever - people who do not have the knowledge or skills or interest level that would allow them to see the politics in the form of the game - Nair moves swiftly from analysis of tactical errors to political critique, but does not make the mistake of treating tactical errors made on the field as historico-political symptom.