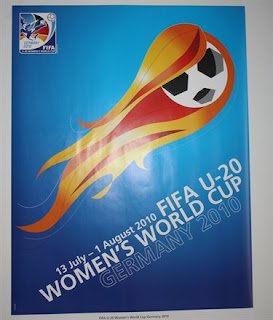 This photograph was posted yesterday on the US Women's National Team blog, without comment. I am going to follow their lead, and say nothing about it - turning instead to the questions raised by the results of the first round of play in FIFA's U20 Women's World Cup.

Can someone please explain how the English women's U20 squad ends up in the bottom of its group?  And how Japan, which has a great senior squad, doesn't advance? Mexico made it through - this is fantastic news - is anyone talking about this? What is women's soccer like in Mexico, anyway? Columbia is in the quarter finals too? (Is it just me, or did their group look, well, like a cakewalk?) North Korea eliminated Brazil from contention - huh? What? And why did South Korea keep their superstar Ji So Yun on the bench for the first half?

And what is up with Korean women's soccer, anyway? They have been a strong side for a while, and both North and South Korea advanced out of their groups. An educated guess: Strong support for women's soccer in the national football associations of these countries is manifesting in these young sides showing us who is developing their talent, and who isn't.  Is it just me, or do Ghana and Nigeria play a version of the game that looks, well, fun? When I see them play, I want to join the team.  Why is that?  Is it just me, or do some of these less heralded squads have unreal talent on them - where do those women play when they aren't playing for their national squads?

I am all questions - no answers, because I am on the road. It isn't like I can pick up a local sports paper to get this information. I managed to catch a few minutes of a streaming live broadcast of Japan's 3-1 thrashing of the English squad.  It was a European sports channel which had - gasp - a FEMALE CALLING THE MATCH.  She was awesome - very witty, in a deadpan girl-jock sort of way. When the guy announcer said that the English side needed to do something, she said, "Uhm, like, score?"  I split my sides laughing.  I am suffering from World Cup burn-out, and have had my fill of the utterly meaningless chatter filling up space, and I'm done with acrobatic statements avoiding the obvious. Another question: Who is she?!

Boy would I love something besides the FIFA reports to read - thank goodness for All White Kit. For some answers to the above, check out AWK.  (I'm following The Girls in the Cheap Seats, too - a new podcast covering all sorts of soccer stuff - hilarious statement about the USWNT U20 team's underwhelming performance against Ghana - "I felt like I was watching the men's team.") But before you hop over there, I am hoping a few of you will fill in these gaps in our collective knowledge in the comments section....