On Mexico's Win: "Marigol" puts the US Women's National Team on notice

Maribel Dominguez scored against the US in only the third minute of the match. She's appeared on this site before (Why police the border between men's and women's sports?), as the player who provoked FIFA to rule that "the men's and women's game must be absolutely separate" when she accepted an offer to play for Celaya FC (a second-tier men's professional club). (Read a 2005 Guardian profile on "Marigol" here.) The team's second goal, a header, comes from Veronica Perez - formerly of the St. Louis Atletica (which folded). She's Mexican American, from San Mateo, California, and with that goal, she sends her team to the 2011 World Cup.

You can watch highlights below (if you want to watch these highlights minus CONCACAF's truly awful guitar ripping score, go here).


The first goal is classic USA - it's just normally the guys who dig holes for themselves at the start of a match.  Carli Lloyd makes her mark, it wasn't enough.  From these highlights, you can see that El Tri Feminil had a very large and very passionate crowd behind them.

Coverage of the game universally emphasizes this as arguably one of the greatest upsets in the sport.  I don't disagree, but frankly, for me, the bigger story is that of the generations of talent in this sport who have been held back by shitty national federations and a lack of support.

I sure as hell hope the US side pulls itself together and gets the job done, winning their game on Monday.  But I also hope Mexico takes Canada - and have a great run in Germany. There are a lot of women in Mexico - and in the United States - who will be happy to cheer for El Tri, and are excited to see the international women's game truly take off. 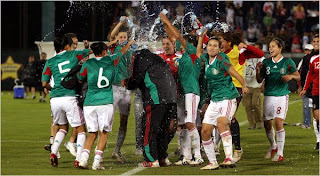