US Women's National Team win reminds us that less is more 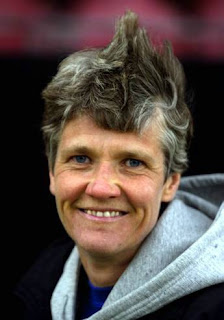 The US women's national soccer team qualified for the 2011 World Cup by beating Italy 1-0 in Chicago. We can thank both Amy Rodriguez for the goal, and Rapinoe for the initial shot (which capped a terrific sequence of footwork on her part).  Picarelli deflected Rapinoe's goal and Rodriguez slotted it into the net before any of the Italian defenders could get there.

The score is surprisingly low. In the second half, Italy really lost its game as the US squad controlled most of the possession and pace, and attacked non-stop. In the last fifteen minutes, the Azzurri seemed to revive but while attackers gained ground and created some real chances, they were alone.

Much as one might want one's team to CRUSH their opponents, these results are a good reminder that successful teams often get there with that 1-0 final score. As crucial as that 1 goal is, that 0 counts for more. Pia Sundhage (pictured) knows exactly what she's doing. It is not what fans most enjoy watching, but there it is. Think of Spain's 2010 World Cup run - 0-1; 2-0; 1-2; 1-0; 0-1; 0-1; 0-1. Throughout the tournament, fans moaned, until their team won.

Of course, we can ask questions about the American team's finish - they had so many opportunities, so many shots that went high and wide one can't even say the team was unlucky in not scoring more.  But, they got it done, which is what teams that go the distance in tournaments do.

I'm not going to complain at length today about ESPN - the commentary was great, if you could get on ESPN3.com - the site did nothing to raise awareness about this match. I'm just glad the national team is through, and very curious to see what happens this summer.