Much of Robbie Fowler’s autobiography is boring. The story of this talented mischief-maker (most famous for “snorting” the touchline) doesn’t grab me. I normally love reading anything football-related - tell-alls, player biographies, histories, theories, economic manifestos, coaching manuals – whatever.

There is no story quite so dull, however, as that of the totally confident person. Fowler and his writer plainly struggled to find those rare moments in his life when he’s been unsure of himself. That uncertainty is confined to anxiety in those months he waited to be called up from Liverpool reserves. Even then, the worry stemmed not from doubt about his ability or concern about if he’d make it. It was more impatience as to when. The book (a favorite for Liverpool fans) is more interesting for its inside peek into club politics than it is for Fowler himself. A lack of uncertainly is a part of Fowler's identity and effectiveness as a player. But in a narrator this quality leaves me cold.

As a genre, player biography is hard. The story of most professional footballers is hampered by the fact that they’ve done nothing else but play the game, and have little to talk about besides either their achievements on the field – with which we are already familiar – or how they blew their fortune, or dealt with addiction, scandal, etc. It’s the rare professional player who actually has a story. Or has the writerly flair it takes to make poetry from the day-to-day life of a footballer (Eamon Dunphy’s memoir Only A Game? is exemplary on this point). 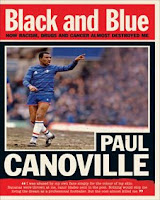 A few players have stories that diverge from the script to tell us something important. Paul Canoville’s Black and Blue was named "Best Autobiography" at the British Sports Books Awards in the spring. Canoville was Chelsea's first Black player - and this is no story about triumph over adversity. He recounts the story of the racist abuse he took from fans, and, more compellingly, he describes the team’s inability to respond to it or to know how to support him. The story of his development as a player and his amazing social life is woven into a nuanced exploration of what it was like to find yourself a living lighteningrod. The book also confronts his battle with addiction and then cancer. It is a compelling story that speaks to anyone who has been subjected to discrimination – and it’s a sobering lesson about the passivity of those who bear witness to it and do nothing. It is also a straightforward account of a difficult life - one marked as much by uncertainty as by determination. It offers no real happy ending, no closure – just the contours of an actual life.

This brings me back around to “Looking for Eric” - subject of my last post. The film ultimately offers a romantic and facile solution to a very difficult situation. Eric conjures Cantona because he needs some of Cantona’s confidence. You can see that confidence in Canonta’s posture – he strides through the film with chest thrust out like the French rooster that he is. Eric, on the other hand, is skinny, pale, sits with his chest curled around itself, is rumpled and withdrawn. As an audience member I felt I should root for Eric to “sort himself out” but the fact of the matter is, as a person, I didn’t buy it. That’s the point at which the film got boring. I don’t buy that life is like football, and if you can just be “confident” the answers to big questions – about what one wants, how to repair what’s broken in your life, etc. – will magically appear.

Considering these three texts together - Fowler's and Cantonville's autobiographies, and Loach's "Looking for Eric," I find myself thinking that sometimes "confidence" is just the uncomplicated psychology of someone who has never experienced failure.