Looking for Eric: A Review 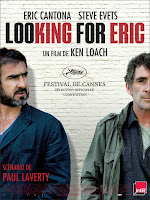 Looking for Eric opens with a crash. The hero of the film is a depressed postman living a very depressing life in depressing Manchester. Eric takes his car the wrong way around a roundabout. He does this just after seeing his ex-wife across the street (he's too shy and hurt to cross over and talk to her, too wracked by guilt and anxiety, and so even though she's waiting for him, he skulks away). Lilly is the love of his life, and he walked out on her without explanation years ago. He is still haunted, however, by his love for her and by hers for him and he stunted by this fact. His friends are worried about him - the crash makes an urgent crisis out of his slow descent, and draws them together around the project of helping him.

One of these stand-up guys is a fan of pop psychology, and initiates a series of gentle interventions. He asks the group of friends to indulge him in an exercise - to first imagine looking at yourself through the eyes of someone who loves you unconditionally, and then imagine looking out at the world through the eyes of someone you admire. Eric chooses, as his fantasy point-of-view, Eric Cantona.

This lays the foundation for the film's funny turn - at a particularly low moment, Eric hallucinates Cantona in his livingroom, and this imaginary Cantona proceeds to keep company with our melancholy postman and, in essence, coach him back to life. This coaching centers almost exclusively on getting himself back in communication with Lilly, his ex-wife. ("I like this woman," Cantona says, "she's got balls.")

Though organized around the reparation of his relationship with his wife, this film is about really about men. Eric's problem, Loach seems to suggest, is as much with the men in his life as it is with women. The film offers a flashback to explain: At a family gathering celebrating the christening of Lily & Eric's baby, his father gets unnerved watching Lilly blow kisses to his son. "That won't last long," he says, as he launches into a nasty tirade about the dead-end trap of marriage and family. In this bullying (expressed as a deep hostility towards women) we get a glimpse of the hard-edged working class masculinity that is closer to Loach's topic. Even as Eric is repulsed by this, and even as it's clear this isn't the kind of man he wants to be, the whole scenario pushes him away. His answer is to run away from it all and not talk about it. (At the film's start, he can't even say Lilly's name.)

Thus the friendship with Cantona - Eric needs a father/brother/friend to lead him out of the woods. And so Cantona leads Eric to turn to his friends to help him through a crisis involving one of his step sons. Talking about his life, his feelings, and his problems has been, up to this point, unimaginable for him. Cantona helps Eric to realize his potential by teaching him to "believe in your teammates, because without that we are lost."

The film is packed with Cantona's gnomic wisdom, "good lessons" like this and has a wildly optimistic ending. It's a feel-good bromance with great footage highlighting Cantona's career.

What's not to love about that?