David Beckham: an argument for non-monogomy 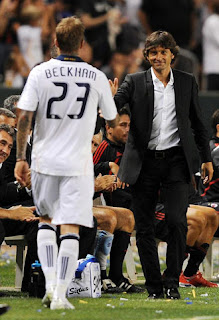 I am talking tomorrow with Gustavo Arellano (KPFK 90.7/4:00pm) about David Beckham, one of my favorite subjects. [Archived show can be found here.] Becks, of course, is much in the news for his reappearance on the LA Galaxy roster in an exhibition match against the other team in his life - AC Milan. (See Nick Green's match report.)

While watching the game on television this afternoon, I couldn't help noticing that the man seems happier. He looks great and seems generally more fit. At the moment, he makes a great case for sleeping around.

It's a foreign concept for the American sports fan, but in the global economy of the beautiful game, players are loaned out all the time. The motivations for such deals are complex, but at least two desired effects can be seen plainly in this case - the guy seems happy, and playing the field drums up interest.

As one sports writer after another leaps on the booing Galaxy supporters as a sign of his failure, Becks manages to do what no other MLS player can: force U.S. mainstream media to pay attention. [For more on this side of his abilities, read this great When Saturday Comes story about Beckham and media coverage of his transfer from Man U to Real Madrid.] Of course, some complain that not enough attention is being payed to the game itself - but, well, you could say that about media coverage of the sport globally as transfer rumors, crazy club finance and WAG antics dominate headlines from London to Rio.

Watching this youtube video of Beckham reacting to booing fans (one of whom responded to Beckham's taunt by trying to scramble onto the field), I couldn't help but think that the Galaxy and the MLS have let themselves be cast as the staid, uptight American housewives (Carol Brady) to AC Milan's dynamic, knowing, and confident Italian lover (Sophia Loren). As if to confirm this, at 50 seconds you can see one fan holding up a sign displaying the word "COMMITMENT" (and something illegible) to scold Beckham for his bad behavior.

I don't know about you, but that'd have me checking out flights to Milan pretty quick.

Of course I have more to say about Beckham & his continental lovers - but I'll save it for the interview.