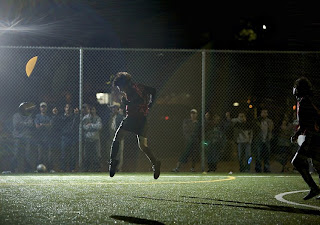 photo by Michael Wells (from Municipal de Fútbol)
L.A. is hot. The sun bears down on you like a controlling parent. League games can start as early as 6:00am as players try to escape its glare. At night, untaxed by the heat, our bodies feel twice as fast, twice as strong. Surrounded by the glory of night lights (not only floodlights, but the glow from apartment buildings, street lamps, headlights, and the moon), playing is just that much more fun - you feel like you are escaping something, from somewhere. And we are. The city seems like another city.

About six years ago, I was at a bar on my own and met a bunch of musicians from Minneapolis. It turned out that they were former cross-country runners. They invited me to join them on a night run.

That was my first and only run in the dark. I almost always run alone. Until that night it had never occurred to me to run after the sun had gone down. I run through a quiet neighborhood, and around the edges of a park and a lake. Women have been regularly assaulted on the route I take - but only at night. I'd never thought about it directly - until I ran with those guys at night, I hadn't known it was something I'd want to do.

Los Angeles is a beautiful city at night. My neighborhood can be spooky with its lush gardens that spill over onto the sidewalk, half-falling-down houses tucked behind magnolia and banana trees, mysterious lights of case study homes perched behind evergreens, and the air thick with jasmine and skunk.

That night run remains one of my nicest memories of Los Angeles. I found myself running in a pack thanks to the easy sociability of a city that hosts so many recent arrivals, so many of whom seem to be their way somewhere else. (At its best, L.A. has the cruisey generosity of a metropolitan train station.) It also gave me a unique sense of freedom - sortof like what it feels like in the desert, where the sky is so open that it doesn't seem to matter which way you decide to go. This is a wonderful feeling to access in the middle of a city - as if you could go anywhere, freely. Of course, in a city crisscrossed by neighborhood boundaries that mark the front lines and trenches of an ongoing and intensely racialized class warfare, this sense of freedom of movement is an illusion, but it is a necessary indulgence when it can be had. It's what allows us to imagine other possibilities, other ways of moving in, through, and across this place.

The pleasures of that night-run pale in comparison with those of playing soccer in Lafayette Park or Vista Hermosa after the sun goes down and the flood lights come up. Fulfilling the promise of its name, from Vista Hermosa you can practically kiss the downtown skyline. Lafayette Park used to leave its lights on all night long - I played for months in games that started around 10:00pm and could go on until 1:00am, or later.

Those midnight games at Lafayette are over: somebody in one of the apartment buildings behind the park complained about the noise, and, incredibly, that was that - the voice of one "stakeholder" shouts down a whole community. Elsewhere in the city, though, people have kept the lights on.

Angelinos have found that night games are an effective way to combat violent crime. This is the basic insight behind Mayor Villaraigosa's "Summer Night Lights" program. This year, 16 parks that had been places to avoid - to skirt and fear (even in daylight) - have become sites of nighttime pleasure.