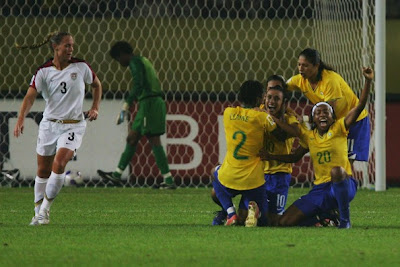 As much as the USWNT 1999 World Cup win over China meant to me, as a fan of the sport I was more impacted by the team's loss to Brazil four years ago.

I watched that match from a bar in France - the same way I've been watching the games this tournament. That afternoon, I can't say as I was that excited. The US had been doing so well, it just didn't seem possible that they would lose. I dutifully went to the bar to bear witness to another victory.

That match completely changed my relationship to the women's game. It drew me closer to the sport, and closer to the USWNT than I had ever been - even as it made me also love Brazil.

There were very few people at the bar that day. Two bartenders. Two women, and a table of four old men. This bar had a medium-sized television up in a back corner. They graciously turned up the sound.

We all know the story. The absolutely bizarre decision to bench Solo, who'd been playing brilliantly all tournament. There was an own goal.  A foul - well, really, a dive from Cristiane (biased memory?) - and a second yellow card to Shannon Boxx at the tail end of the first half. The US played with ten women through the entire second half.  Marta did samba moves. Not samba-like moves, but the most deliberate taunting of a defender I've ever seen. Everyone on Brazil's team was having a good time. They were beautiful, and nasty. I loved watching them play like that, but I couldn't stop thinking how much I would have hated playing them.

And then Marta scored that goal. By that point all of the nine or so people in the bar were on their feet. The men shouted "Maradona! Maradona! Maradona!" over and over again. The woman on TV calling the match broke out into a cry - I never head anything like it before, or since: "C'est pas juste!" and "If she were a man, she would be making millions and everyone would know her name."

I cried. It was only the second time a soccer match did that to me - the first was 1999, when I turned on the TV and saw the crowd.

In both cases, they were tears of unexpected joy.

Sure, I was totally demoralized by what was happening to the US women. It was so unfair. Solo seething from the bench (quite rightly), Scurry trying to do her best in a ridiculous situation. That own-goal. The totally ludicrous card.

But the way Brazil played...

Until then, I had such a narrow view of the women's game. I'd only ever seen women play a "European" game. The way Brazil manipulated the ball, mind and soul of that game was incredible. And typically Brazilian. Brazil made me want to see more than what the media gives us. It made me look for Latin women's leagues in LA, women's football in Spain, England, Nigeria and Equatorial Guinea. It opened my eyes to something. Until then, in my heart of hearts, I found much women's soccer kind of boring.  I realized, however, that I had seen only a small slice of the way the game is practiced. If I wasn't floored, entranced, in awe - it was because I hadn't really been watching in the first place. So, now I watch the game more carefully, at home and abroad.

I write this blog because when I felt the earth move when I saw Marta score that last goal. So, now, I do usually root for Brazil. The way Marta, Cristiane, Formiga and Rosana play impacts so many women around the world - more, I think, than any team right now.

Brazil plays the USWNT this weekend - this will be the biggest game of the tournament, in terms of the emotional stakes. I want Brazil to win, and I want the USWNT to win. I can't choose.

I want a different game than that we had in 2007: one not marred by terrible coaching decisions, one free from freak goals and irresponsible refereeing decisions. I want a beautiful game from both squads - so we can see who, at least on that day, is the better team.

Most of the people I know who follow the game closely feel the US has the edge. They just have better support, better experience. You can see the team work, figure the game out. They are "all in."

Brazil has looked disorganized for significant periods of time during their matches.  But Brazil also plays like Brazil. Doing a certain kind of minimum sometimes, where you don't think they've showed up to the game, and then suddenly their opponent is up against it. Done for.

Don't believe anyone who tells you that they know how this game is going to go.