A View from the Stands: On USA v France

After the pathos of the win over Brazil, today’s match was a relief.
My sense of relief pales, however, compared with that of the people watching the semifinal with me.
I write this from the “family bus” – as luck would have it, I attended the France-USA match with the family of Lori Lindsey. The USSF has a “family program” – a package tour that allows a player’s friends and family to spend game day together and sit en masse - many in full USA regalia.
I can see the attraction of it. Fans have one relationship to the game, players another. A player’s circle has yet another way of relating to things.
The morning ride from Frankfurt to Monchengladbach was subdued. Lunch was quiet, mellow. Families of substitutes (like Lindsey) hoped their player would get time, they worried about the day’s result – but hardly dared speak about it. We tended to talk about other things - anything, really, but what was staring us in the face.
As much as they want their player to play, everyone wants the team to win, more.
Spending game day with moms, dads, partners and friends of the team was grounding.
Pundits and fans talk a lot about what they think is going to happen. What we present as givens are usually enormous assumptions. Until a few days ago, a lot of us talked as if the teams were competing for a chance to lose to Germany.
The only people who probably didn’t think like this were those around the team itself. Partners and brothers, dads and aunts. Moms. They thought more about what they hoped would happen, and avoided thoughts that made any of presumption of victory. Superstition. 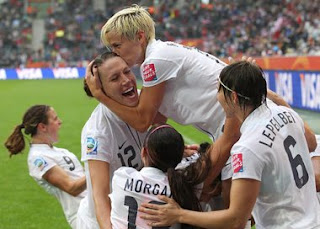 Back to the match itself
Although this was destined to be one of the most lively matches of the tournament (in strictly footballing terms), attendance topped out at 25,000. (The stadium holds 40,000.) Our side of the stadium was pretty full. Opposite us were rows of empty VIP seats. This was probably most of what the televisual audience saw of the crowd.
US fans were present in numbers, however. You have to credit American soccer fans – they (we!) were visible, and loud. The best were a large mysterious tribe of girls in handmade t-shirts, painted faces – painted bodies in fact. They wore not one scrap of FIFA or Nike produced regalia. Everything was improvised with the sloppy enthusiasm of a real fan. They ruled their section of the stadium – and fed a steady drip of hysteria into the somewhat anemic stadium.
French soccer fans really missed something – and frankly, their team needed them.  I’d say I was surprised by how few of them were there, but having spent the past three weeks in France I know there is very little awareness, very little outreach on behalf of Les Bleues. Photo-spreads in Sunday magazines do not put warm bodies in the seats. The FFF has to work a lot harder.
Les Bleues needed just a little bit more wind in their sails. Their skill on the ball is incredible; their passing is elegant; they exploit their opponent’s errors ruthlessly. For most of the match, we were just plain anxious.  But Les Bleues also appeared to be seized by waves of nervousness. Every now and again they’d hesitate with a shot, make one pass too many – a chance would come and go. But as soon as that fear was beaten back, they seemed invincible.
But they weren't. The last thirty minutes of the match were so incredible. I am not sure the USWNT has played a better game this tournament. You all will have to tell me what it looked like on TV.
All I know, is the view from the stands, where I sat surrounded by the people who love the team the most.