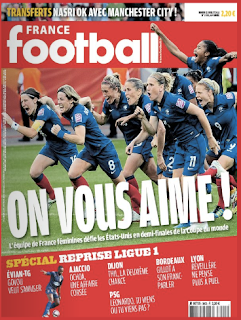 This week's cover of France Football is a first for the squad - the headline "On Vous Aime!" has a lovely double resonance. It means "We love you!" and it's used by football fans - I have a Marseille scarf with this exact thing written on it. (Who writes that on a football scarf but the French!)


Used with regard the women's team it has a special meaning to at least this reader. It's a formal "we love you." I've been told that this can be very seductive when used in the right setting. The "vous" between people who would normally use "tu" with each other is a sign of affection and respect. Being on the receiving end of that statement is a real pleasure.


Of course, this love may be fleeting - I am not sure what national press pays sustained attention to its women's national football team outside of the World Cup. But this week, Les Bleues are basking in an attention they have never received, ever. And some of that attention is even going to they way they play.


But a lot of that attention is going to how they give French football fans a way to enjoy watching the national team, after last year's awful World Cup and subsequent months unpacking the racist, anti-immigrant attitudes of FFF executives. This team, as many women's teams do, represents a more wholesome and honest game.

It's a great year for Les Bleues, and the women really deserve it.


I haven't written much about them on this blog - but I've probably seen half the squad play (more?) attending Montpellier matches (including two against Lyon), and also at WPS games: Camille Abily is one of the smartest and most interesting players in the world. She is intense on the pitch. When she played for the LA Sol, she was as effective as Marta in putting points on the board.

Soon I'm jumping on the bandwagon to Monchengladbach to see them take on the USWNT, and when I'm there, I'll be thinking of the first time I saw many of them play, in Villeneuve-les-Maguelones, at Montpellier's wind-swept practice stadium not a mile in from the Mediterranean coast. Women's matches there are free, and the little stadium usually has a small but enthusiastic crowd. Teens, families and lots of old men sick of the men's game. They'll say things like, "Les nanas, elles savent jouer" and then launch into tirades about the crappy refereeing.

It's a really nice scene, and it is a world away from where these players are today.

I'm proud of the way the USWNT played against Brazil, and I'm really excited to see them take on Les Bleues. Beware!