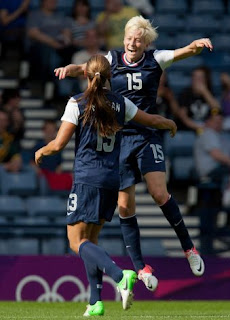 If Les Bleues feel robbed today it's in the way you do after leaving the doors to the house unlocked and the windows wide open. They took the early lead with two quick, confident and gorgeous goals from Gaëtane Thiney and Marie-Laure Delie.

But the Americans kept their cool. Or, rather, they woke up.  Rapinoe replied with a well-placed corner picked up by who else and what else but Abby Wambach and her head. French players shrugged with a "what are you gonna do?"

Alex Morgan's first goal was a delicious example of how smart she is as a player.  Revolving her body around a loose ball as it dropped at her feet, she tapped it into the goal with two defenders on her. At least that's how I remember it.

There was more. Lloyd rocketed a P'noe assist. P'noe was just a great play maker today, setting off a counter attack with Heath and Wambach that had Morgan racing up the right as the ball was moved forward across the field - she took her place at the far post with plenty of time to spare and nicked the ball in as it came across the goal. The US played a fantastic team game today.

France fought the whole way - it wasn't an easy win but it was an assured one. Les Bleues will be back: they looked very strong, very smart. I think that early lead surprised them?

Some of the other games remind us of the teams that aren't here. Also of programs that had a great history but have fallen off the international radar, like China. Cameroon seemed so young, so inexperienced - it just isn't right that a side like Nigeria has become such a shambles they didn't earn a spot here, or that Equatorial Guinea is at home (for a player eligibility violation during the World Cup) while North Korea are here. North Korea just shouldn't be here. The team was disqualified from the 2015 World Cup but allowed to play in the Olympics - adding insult to injury, word is FIFA forgot to run drugs tests on North Korea during qualifying matches.

You have to feel for the North Korean players, though: that can't be easy. Especially when the match organizers slap the South Korean flag next to your face in the team introductions. The team stayed off the field for nearly an hour as that diplomatic nightmare was sorted out.