If you aren't following Hope Solo's twitter feed, do. 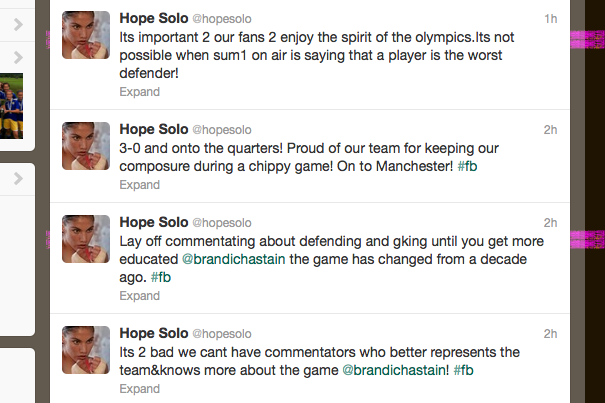 Today's tweets were in response to Brandi Chastain's remarks during the US game against Colombia. At about 18 minutes, Chastain disparaged defender Rachel Buehler's ball control. She said that Buehler gives the ball away too much, and "needs to work on an improve on" her trapping skills. The problem is not exactly what she said. What defender doesn't need to work on, improve on her game? The problem is the way Chastain said it - these remarks were part of a constant stream of negative commentary about the US's game. There was, in fact, so much criticism of the USWNT that there was hardly any real discussion of their opponent. A commentator is supposed to offer criticism of the match - Chastain is not being paid to be a cheerleader for the team (this is where Solo is wrong). But criticism should be even handed. What did we learn today about Colombia? Not nearly enough.

I've been hesitant to criticize Chastain - like a lot of people, I admire what she's done for the game in this country. (She was delightful in an interview I did with her a couple years ago.) I also like having a defender's perspective in the mix. Personally, I always want more attention to the game's dark arts.

For me, the real problem with Chastain's commentary is that it is humorless. That's why the criticism she doles out for 90 minutes can feel so grating. She sounds irritated with the game. She sounds annoyed. It just is not fun to listen to.

Supporting the sport doesn't mean going easy on teams - quite the opposite. Informed, detailed, animated analysis of the game makes everyone watching it smarter. Passionate narration of the action gets everyone more involved in the broadcast. In an interview about his earliest memories of soccer, Zidane recalled not the action, but the commentator's voice - he remembered being pulled to the television by his voice. The sound of a person totally interested in and excited by a game.

The shocking thing here is not that Solo had something to say about how Chastain calls matches. It's that she let loose about an NBC commentator and former US national team player on Twitter, right after a game. Someone wound her up. This leaves us with some interesting questions:
Anyway, I love that we have players who are not totally controlled by the team's handlers.  Or maybe they are. Maybe this is all about stirring the pot, keeping the women in the news, and using the ancient trope of the cat fight to do so.