A Punch in the Face 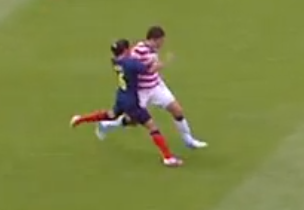 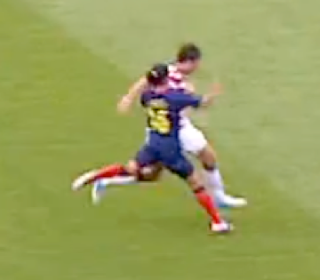 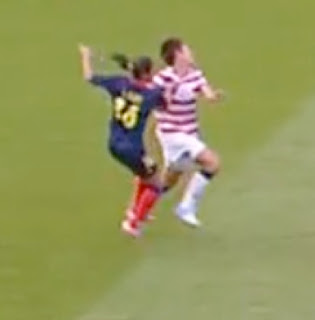 Colombia played a good game: they have hustle and you can see flashes of real skill in their ball handling. But they were clearly frustrated by the USWNT, which seemed sometimes relaxed and in the groove and sometimes distracted. But they were dominant nevertheless. Those flashes of insouciance would have driven me mad - nothing worse than playing a team that's thinking about the next match while it's dispatching with you.  Colombia had a moment of thinking there was a chance, just a chance - they kept the game scoreless for the first thirty minutes. But then Rapinoe scored.

A few minutes later Rapinoe was flying up the wing with the ball. Lady Andrade struggled to get ahead of Wambach, who was racing up the middle. Incredibly, Andrade reached around Wambach with a hook to the face. Deliberate foul.

Except the referee didn't see it. Wambach was just about in line with Rapinoe - so I'm really stunned that none of the other officials caught it. No whistle for the foul. Wambach took another hard foul almost immediately after - this one less deliberate, though. And then a scrap over a dead a ball. Thankfully, things calmed down in the second half. The USWNT, already up 1-0, put the game away with two more, and qualified for the quarterfinals. Good news but Wambach may have a nice shiner to show for it.