All In, All Out: a note on the amazing Megan Rapinoe 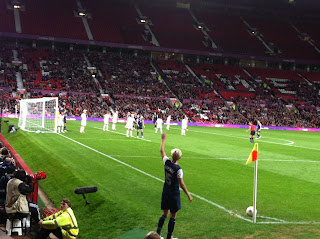 In two interviews, four years apart, two different USWNT players casually identified themselves as gay to reporters. Neither did so with the solemn declaration, "I'm a lesbian." Both players answered a reporter's question in a way that snuffed out the presumption of heterosexuality maintained by mass sports media on those rare occasions when it addresses women athletes, a presumption it maintains in spite of all evidence to the contrary.

In 2008, Natasha Kai (remember her?) responded to an NBC interviewer's question about her rocky start on the national team squad:

"It was a hard time," remembered Kai, who saw limited action under former coach Greg Ryan as one of the last three players added to the 2007 World Cup roster. "I had missed the first camp [under Sundhage] in early-January because I had bronchitis, and I was going through a nasty break-up with my girlfriend. Then [Coach Sundhage] told me my job was on the line."

The fact that she's gay was not only subordinate to a story about her fitness; it was subordinate to the story of relationship trouble. The "problem" was not that she had a girlfriend, it was that she and her girlfriend broke up. It was gay drama, but it wasn't drama because it was gay. It isn't at all clear from that interview that Kai was coming out to anyone but the reporter, or to the reader who assumed she was straight. Her answer is structured by the assumption that this is just her life, and anyone who knows her would know this.  Which is a coming out - and it's the kind of coming out that has to be staged over and over again within a discursive context that prefers not to notice that there are a lot of gay people in the sports world. Scarcely any of the media discourse asking "when will it be OK for a soccer player to come out" qualifies the question by pointing out that in fact prominent women athletes have come out, and are a part of our sport. And that this hasn't magically banished homophobia from it.*

Megan Rapinoe's coming out was even less direct than Kai's. In May, Jimmy Conrad (former US national team player) interviewed Rapinoe for KickTV. At the end of their conversation (at about 5:20), he observed that she's been supportive of the gay and lesbian community. By even pointing this out, Conrad identified himself with that community as at least an ally. When does Bob Costas take notice of something like that?


KickTV isn't like mainstream sports media. The Youtube channel is closer to a fan forum. Conrad is very relaxed and familiar with his interview subjects, and his interviews are conducted with a sense of humor. The whole affect of the video is closer to what soccer culture actually feels like (alternately technical, serious, self-deprecating, goofy, bashful). It is much more familiar to me than is anything I've seen from NBC this summer.

Conrad's question seemed pulled from conversations about the men's game. Things are pretty stark in that world. It is indeed hard to imagine a current EPL player coming out to the media. The question seemed like it was pointing in the direction of the men's game, but this wasn't at all clear.


In the women's game, things aren't so black and white. There are, in fact, quite a few high profile figures in women's soccer who have spoken publicly as lesbian athletes, usually without making the fact that they are doing so into a headline. Pia Sundhage, Nadine Angerer, Hope Powell - in most of these cases, the fact that these women have placed themselves within the lesbian and gay community isn't news, except to LGBT media. (Outsports.com keeps a constant eye out for players who take this step, as does After Ellen.) Mainstream sports media avoids acknowledging the sexuality of out lesbian players, even as it apparently can't stop itself from addressing the romantic lives of straight players. (Thank god for Hope Solo, who forces heterosexist media to wrangle with a loud-mouthed shameless man-eater. HA.)

In any case, when it comes to naming a player as not only lesbian, but "out," in the women's game we are often discerning between shades of gray. In an interview for a program called Abbey Road, for example, Marta was asked about the impact of her international travel on her relationship with her girlfriend (also a soccer player). She said that of her two loves, soccer comes first. Is that a coming out? Can a player be out in Sweden but not in the US? Seems so. So why, in the US, does the air get sucked out of the room when the word lesbian is put in the same sentence as "Marta"? Perhaps while she was under contract with the WPS, the desire was that everyone practice a "don't ask, don't tell" policy? What was the fear,exactly? That lesbians might suddenly start attending soccer matches?

In Strong Women, Deep Closets (1998), Pat Griffin offers a table of escalating categories of "outness" to describe how people manage their identity in sports.
It's a helpful scale for at least presenting something other than the "closeted" or "out" binary that usually shapes this conversation. A lot of public figures in sports seem to fall somewhere between 4/implicit and 6/public, but of course these would be the athletes that we are mostly likely to notice.

Even within the top of that range there seems to be room for nuance and gradations, given the complexity of the media sphere. Today, it isn't like you are coming out to one of three networks. Instead, you talk about your girlfriend within a very specific media context that cares and respects you for the player you are. It's not the same interview you'd give to ESPN - it is unlikely that ESPN would solicit that kind of interview from you. They aren't going to ask you what it's like to have a girlfriend who also plays your sport at the international level. Or if coming out shifted your play at all. Or if there are lesbian athletes who inspired you. (espnW might, someday.) The remarks you do make on these subjects within the micro-media of (e.g.) women's sports blogs may or may not be picked up by larger media networks. Given the paucity of attention given to the women's game in general it isn't likely to be as big a story as, say, a ponytail pull.

Anyway, Pia Sundhage has said that for her being a lesbian "is no problem," and that she and her partner were welcomed when they came to the US. (See Patricia Nell Warren's recent article on Sundhage.)

But it is a problem for plenty of people. As readers of this blog will know, there's a broad and deep culture of homophobia in and around women's sports. And if players are pressured to be very, very discrete about their homosexuality, you can assume that this pushes a lot of women out of the sport entirely. Gender policing and homophobia push a lot of people out of sports. No news there.

Athletes decide to be discrete about their sexuality for lots of reasons - and I'm not in any place to speak to their experiences. Coming out to the media is a political act and what that means to the person who does it is something only they can tell us. But the ramifications of coming out seem to be more complicated than we want to believe - for women have come out, and that doesn't seem to change how women are represented. If anything it just seems to make the commercial organizations that manage sports anxious.

You've vocally supported the lesbian and gay community. What do you think about the absence of out athletes in sports? Do you think we'll see a high profile soccer player come out soon?

This question replicates a lot of assumptions - assumptions built on years of not remembering or noticing the women athletes who are out. I mean, her coach is out. And she's one of the most famous people in the sport. How can you ask a woman on the USWNT soccer team that question without erasing the lesbians who are a part of it?

There was no way for Rapinoe to address that question with a "Yes/No/Maybe" without replicating its assumptions. And there was no way to respond honestly without "outing" herself. Without promoting herself from perhaps level 5 to level 6. So Rapinoe answered:

Hopefully. I think that obviously we're out there. It's weird. I guess on the female side, not on the men's side. But it's accepted within the teams and within the sport. But it seems sports is that last...institutional homophobia.

Welcome to level 6. I love how in getting stuck with explaining a pretty complicated subject she just sends a cross to "institutional homophobia." For that's the right move: if you haven't noticed that quite a few of the most famous women in the sport are out to the media, then that's a symptom of a big problem.

Rapinoe refused to allow herself to be interpellated as closeted, and she also refused to allow the question to situate her as somehow in the dark about the fact that there are, in fact, quite a few out lesbians in the sports world. Obviously. That is as important as the word "we." Obviously we are out there.

All of this is to say that there are out women in sports. Pia Sundhage, Hope Powell, Nadine Angerer - that's just a few. None of them are shrinking violets, none of them are in hiding. But there are days when it seems like the media is hiding from them.

As we all know, Megan Rapinoe has gone on to have a fantastic tournament. Obviously, there's no hiding from that.

*For bloggers trying to find their way through this thicket, GLAAD offers a media guide for addressing sports and homophobia. You can download it here.