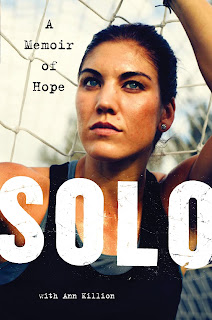 Solo: A Memoir of Hope is the story of a deeply charismatic outsider. She is a lone wolf, but she was also a prom queen. That's the paradox of Solo's persona: she's the outcast in the middle of every drama, the anti-social social phenomenon. Solo might be an independent spirt, but this book is centered on her relationships with other people.

The book's most compelling writing focuses on her childhood and on the drama which unfolded behind the scenes at the 2007 World Cup. Her father - a drifter and a grifter - is at the center of both stories. He looms large over the whole book, for good reason. He was a natural athlete, a charismatic and attractive man who was much loved by the dozens of kids he coached. As Solo herself acknowledges, her father routinely destroyed his personal relationships - he stole money from his family, and he left Solo's mother dispossessed of their home.

People in Solo's family stuck by each other though seriously troubled times - her family is full of complicated people who are fiercely loyal to each other. Solo was very close to her father - and he wasn't an easy person to be close to. He died just before the 2007 World Cup - only months after a friend of Solo's had been killed in a car accident. She buried him, and went to China supported by other players with experience dealing with profound grief. The squad seemed tighter than ever until its coach benched Solo for the match that would become the team's most infamous loss.

Most fans will read the book for its chapter about the 2007 World Cup. Like many watching the tournament, I was shocked to see Solo on the bench. With a different keeper slotted into the defensive system deep into the tournament, everything seemed off. As is now well known, after the match Solo said a few choice words about the selection. She asserted that she'd have made the saves that Briana Scurry didn't.

After reading Solo's account of the aftermath of this loss, I felt far more sympathetic to her teammates than I expected to. Solo was punished for criticizing the team. She was isolated, forbidden from watching the last match, forced to fly home separately and put through the paces in a way that seems really particular to women's organizations. The team bonded in its criticism of Solo and staged "come to Jesus" sessions whose main function was to be to heap more and more shame and anger upon her. The team was stuck in an emotionally abusive script.

It's clear now that the team was struggling with the humiliation of that defeat. Although the book does not provide much insight into what that felt like - there is no blow-by-blow account of that match (at least not with the level of detail you'll find in other player memoirs) - it is clear that the entire USWNT organization lost their minds.

If Solo was grieving her father, the team was grieving the loss of its status. It had been separated from its glorious legacy and it had been separated from that legacy by a team with far, far less institutional support and experience. It was, for a lot of these players, their first experience with this level of failure and public humiliation. Given the team's status as the sport's golden girls, that fall from grace would be a long hard trip.

That so many of the players framed Solo's behavior as a betrayal of the '99 legacy affirms that everyone was feeling their way through what was, in fact, a structural inevitability. Solo's account of this period reveals a community of women holding very tightly onto their heroines. I think it also shows us how scary it is to take your place in those ranks.

History has a way of forgetting women - especially women athletes. A lot of us feel protective of our history. We must all remember that the women who won trophy in 1999 were not the first American women to play the sport. They are the first American women whose names were celebrated. I don't think there is any easy way to take your place in a history that is so recent, so tenuous. When Solo complained this summer that Brandi Chastain was too critical in her match commentary, she surfaced the problem in the relationship of one generation to the other - a structure neither of them created and that neither of them can transcend. Chastain's criticism will sound like a mother's. Solo's complaints about that criticism will sound like a daughter's.

Men can point back generations. They can place themselves in elaborate constellations of teams and players. American women have had just this one team. And they are with us - broadcasting the matches. As they should be. What a burden to carry, though. Ugh.

When the USWNT lost to Brazil, and when they lost in such a dramatic fashion, they showed everyone that they were not that team. And, perhaps, until then, on some level the team didn't know how to think of themselves as better than that team - each generation needs to work this out.

It's difficult to grasp what this loss - so laden with its symbolic weight - must have felt like. A different kind of book (written by a neutral party with a more critical eye and poetic touch) would make this into a different kind of story. Who is to say, for example, that Solo's remarks weren't themselves a violent disidentification with Briana Scurry's abjection in that moment - a way to emotionally protect herself from the knowledge that it might easily have been her hung out to dry. She'd put a huge burden on herself - she was playing for her father. What if she let his memory down? What if all that drama was produced by young women carrying complex fears and anxieties about their place in the world? One, in isolation, playing for the memory of her father. A collective, formed in opposition to her, bonded in defense of the memory of their mothers. Each loyal to another generation at the expense of their own.

That's an awful conflict. And it is not a part of Solo's story. That's me reading into it.

Solo comes off in this book as supremely confident. She actually doesn't seem to have much of a relationship with fear of failure. Or fear.

(This brings us to the limits of this genre. As I wrote elsewhere in a post about Robbie Fowler's autobiography, "there is no story quite so dull...as that of the totally confident person." Usually this makes player memoirs kind of boring. Many of the most famous have never sat with real failure. And those players have done nothing but play football all their lives. And they are young to boot. Not much drama there to work with.)

It would be nice if there was more of Solo's game in this story. I assume that as this book was put together, someone thought that detailing her team's various campaigns would turn off all but the hard core fans of the sport. I'm sure they were right about that. Thankfully, someone thought that the book should include some discussion of the USWNT win over Brazil in the last World Cup. That chapter is emotionally rewarding.

The book is a fantastic read - it's a great portrait of a player in context.


I conclude with a complaint I couldn't fold anywhere else into this review because it seemed so out of place with the book as a whole. Solo doesn't get into too much detail regarding her love life, but she does confess to making out with a woman while she played for Lyon. She writes,


One French girl flirted with me for months, asking,

"How do you know you don't like kissing girls if you've never tried it?"

One night I got drunk and let her kiss me. I'd had gay teammates throughout my career-I thought maybe I should see their side of things. So we made out. Interesting but not life-changing. I was straight.

The references to her relationships with men are more abstract. She dates men, has relationships with men - she does discuss this fact but not in any great detail. So why have the lesbian kiss in the book at all if not to titillate the reader? This is the book's "no homo" moment - invoking homosexual possibility only to contain it. With nothing else to say about the gay teammates she has had throughout her career (and what can she say about them?), I am left wondering what this passage is doing there at all.