Greatness Has Been Found: A Close Reading

At the end of yesterday's match, most of the USWNT pulled Nike t-shirts over their uniforms. The kit sponsor must move its merchandise. As long as the swoosh is on the team jersey it doesn't much matter than they throw another Nike product on at the designated moment. Except that this shirt is just so awful. Let me count the ways. 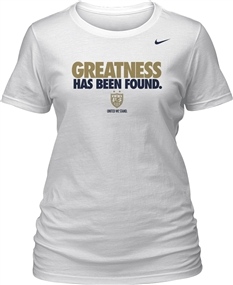 Greatness had been found.

The suggestion is that in the win, the US 'found' a greatness that was absent from not only the team, but from the tournament. This is embarrassing. I love swagger, I really do. But this isn't swagger.

Greatness has been found. In small letters, under the emblem, "United We Stand."

The USWNT has been ranked either number 1 or 2 in the women's game for eons. Even if they don't make the road to victory easy on themselves, they are, in fact, not the underdog. They are the team that everyone wants to beat. Their opponents bring full-on heavy metal GAME. Everyone loves to take them down.

To suggest that this team has had anything but a very long history of "greatness," that this "greatness" (what a shitty word) is anything but their freaking baseline is just ridiculous. Not one fan buys that narrative.

The closest this team came to being an underdog of any kind was last summer and frankly it was only those of us who actually follow the team who were even aware of this. In fact, most of the mainstream US sports media ignored the team during its struggles. Most of us fans could not watch any form of broadcast of the play-off matches with Italy which would determine IF they were going to the World Cup at all.

Greatness has been lost? If only the channel was found upon which we could watch it!

You'll never walk alone? You will in the world of American women's football if you are anything less than freaking invincible.

The Americans feel like they have to win every tournament just to stay in the headlines. Last year was scary. Placing second in the World Cup in the same year that the home league was floundering must have been absolutely harrowing for everyone on the team. This hit home for me as players talked about how hard that loss was. That wasn't just about being bested by Japan. That was about what not being the best might mean.

So it's a bullshit slogan because it implies that people have stood by the sport in its darkest hours and now they have been rewarded by the team suddenly happening upon their own greatness. The US women's soccer program is, instead, a fascinating story of a super-dominant team that has to fight for every single scrap of media real estate. They been doing this for, uhm, twenty years.

The best you can say is that the team was flirting with slight underdog status for a few months last year. There was a chance they might not make it to the finals. A chance. That, my dears, is not an underdog team.  Imagine representing Manchester United or Real Madrid or Spain this way. For, really, that's the level of "greatness" we are talking about, isn't it?

Now, this slogan has a context. Nike has been working this "greatness" theme in an Olympic campaign celebrating the greatness in the ordinary athlete. But the unveiling of this shirt at the moment the US defeated the World Cup champs reveals the grotesque ideology at work in the multi-national apparel corporation's advertising. These ads are deeply manipulative - they show little kids inhabiting the space of big-time sports competition. Adult voices narrate their story as that of the underdog. It's a recitation of all the times girls and boys are told, "no, you can't just do it." And they do it anyway.

If you want a glimpse of how much media manipulation goes into such things, just look at the media's love affair with Lolo Jones and its complete disinterest in the three women who actually won the 100m hurdles. I admire Jones - but USA athletes Dawn Harper and Kellie Wells were favored over Jones and took silver and bronze. New Zealand's Sally Pearson took gold and set an Olympic record. The three of them ran a close race. Photo finish. But at the race's end, the media flocked around Jones.

Meanwhile, Mexican American Leo Manzano stormed through the pack to take a silver medal in the 1500. That's a huge story for all sorts of reasons, too. But it hasn't gotten the same coverage that as Jones's tears.

The media liked the idea of a very beautiful woman who disavows her power. I've always read the media fascination with Jones's virginity as a preference for the self-castrating woman. The pretty, non-threatening underdog. Meaning, if you are woman athlete, please pretend that you don't know the full measure of your power. Please, just be great. But not too great. Not too obvious. Tuck that greatness into the closet. Let someone find it for you. Oh, and please be pretty.

Oh, what a story it would make for that woman to win! This is the media's work not Jones's - she is right to complain that the excoriating she's received is unfair, and it actually makes the whole situation worse.

She lost. Sports media (or, I should just say NBC) was left the fact that it picked an underdog who didn't even medal. AWKWARD. Because then the media was left with the looming question as to why it continued to ignore the two American athletes who did. Even a next-day interview turned focus back to Jones as the interviewer (Michelle Beadle) baited Harper and Wells to trash talk. This they did somewhat gleefully.

Neither Wells nor Harper are self-effacing. They are not prone to apologize for being great. But neither is Usain Bolt. Bolt can boast about being a living legend. He is one. That shirt would make no sense on him. And it makes no sense as a USWNT shirt.

Bolt is with Puma, as it happens. Puma likes Bolt. Puma also understands how to use real-life grammar. 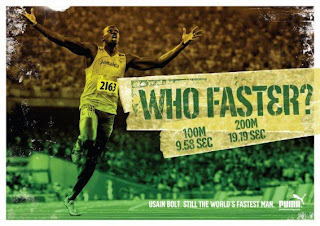 Where was this greatness? Under the couch? In the back of the closet? Did someone leave it on the bus? Someone actually wrote a slogan in passive voice - and then vaporized whatever trace of the subject might have been implied from both the noun and the verb.

How was this greatness found? Did it just roll out from under a seat and then it was noticed, generally - by no one in particular?

American mythology flips its obsession with winners into the delusion that everyone can be a winner.  A winner and an underdog. Everyone always already has won. If this sentence doesn't express the affective miasma of entitlement I don't know what does.

You know, one might want a shirt that said something like "2012 Olympic Champions." OH, wait. Adidas is the official apparel company for the Olympics. Nike can't make a reference to the event on the shirt. (How about "The USWNT went to London in 2012 and won this t-shirt"?)

Finally: The shirt is boring. There is nothing visually interesting about it at all. Not one design element resonates with the game. It could be about anything. Or nothing.

Far, far better are is the "greatness" found by a bunch of teenage girls armed with a pair of scissors and some face paint. They express a guileless enthusiasm for the game that just can't be bottled, and you know it's the only kind of shirt that does real justice to the players.