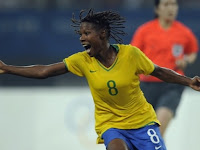 Wow. All I can say is Wow. (Click here for FIFA match summary.) As Canarihnas just played the game of their lives against Germany (Check out Amanda Vandervort's article on them here). After a rocky start, in which Germany looked on path to beat Brazil at her own game in a repeat of the 2007 World Cup Final, Brazil came back from one down with a brilliant strike from Formiga (pictured here) and then followed up with a string of devastating attacks on goal - playing circles around the 2007 World Cup Champions to end the match with a decisive, and very entertaining victory (4-1).

Brazil's defense looked awful at the game's start, and I'm going to say one of the plays of the match has to be a save from Tania early on - at about 2 minutes, she dug deep and literally extended herself farther than one would have though possible to get rid of a very dangerous cross headed right to the front of the goal, where Germany's strikers were waiting. Overall, in the opening Brazil's defense was harrowing to watch and they looked bizarrely slow. 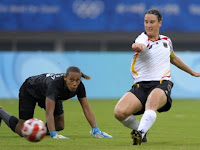 Meanwhile Bridget Prinz had her eye on the goal, and looked on pace to score. She's tall, and has a lot of physical presence - she's also lightening fast, and opened the scoring at ten minutes with a first rate run, out dribbling the opposition and taking the ball right up to the goal. It was a move right out of Brazil's own play book. My notes on this point: "WTF!?" That's a good "WTF", by the way, because it was a great goal - even if it made my heart sink.

The game was a rough one (3 yellow cards for Brazil, 2 for Germany) - as was the case with their opening match, neither team wanted to let the other team find its rhythm. There were some scary moments - early on (around 6 minutes), as Angerer raced in to protect the ball she threw herself in the way of Daniela's raised foot - she took it flat on the chest. It looked like a 50/50 challenge to me, as Daniela had no right to expect Angerer's body to be there, and Angerer did get the ball - the latter is 100% fearless on this point, and has made some insane-looking challenges in the past (giving up a penalty in the 2007 World Cup to Marta - which she then saved). It's part of her strength as a goalie, she makes you think twice about taking the ball close. She took a minute, but got up and was right back in it. She is tough as nails. She was then making one stop after another - and as impressive as many of these saves were, I found myself thinking that if Brazil kept up this level of attack, it would only be a matter of time. 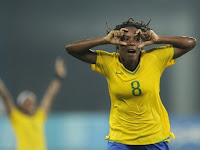 The turning point of the match came at 43 minutes. Cristiane took the ball deep into Germany's half with loads of defenders on her - she nutmegged Stegemann and then made some highlight-reel worthy maneuvers around the defense - toeing and rolling the ball this way and that, to turn and send it right to the sweet spot in the middle: Marta, of course, was there (and marked). FIFA says she failed to connect - but this video suggests that she actually might have flicked the ball on (or not) - but an unmarked FORMIGA raced in and fired the ball into the net. Split between Cristiane (capable of shooting on target even when mark 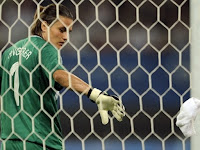 ed by two or three players), and Marta (ditto), and Formiga (there was no one left to mark her!) - Angerer was beat: For the first time in god knows how many minutes.

I have come to admire and respect Nadine Angerer so much that a part of me was sad to see her unprecedented streak brought to an end. Her record of minutes played without conceding a goal will, no doubt, stand for years and years to come.

Now - can I just say: I called it. Formiga! Not to take anything away from the twinned futebol goddesses Marta and Cristiane - but, as I've argued elsewhere, mid-fielder Formiga in many ways represents Brazil's strengths as a team. The talents of strikers like Marta and Cristiane are easier to measure in the very very limited space alloted to women's football, and you'll rightly see their names everywhere in coverage of the team's Olympic exploits. But with so little column inches given to writing about the women's game, we don't hear much about the John Terrys, Lilian Thurams, Petr Cechs, or even the Zidanes of the women's game. When I first started watching Brazil, I kept asking myself: What position does Formiga play? Because you'd see her clearing the line (as she did at least once in this game), playing well back, and then well forward - racing in to follow up the forwards, taking loose balls back and distributing. She is a very, very smart and fast player - with what I think they call "a great work rate." I would just love to have the stats on how many kilometers she logs in a match.

I don't think she's called Formiga because she's tiny. I think it's because playing her is like being covered with ants. She moves like she's got eight legs and like there is a thousand of her. She drives you crazy because you can't get rid of her. She plays like an army of Formigas! Formiga: I am a fan! So, I practically wept when she opened up the scoring - and it's fitting that she should hammer home a fantastic team goal, too. 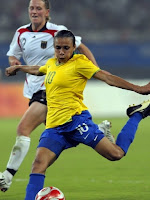 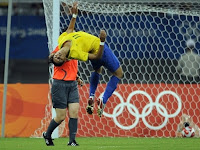 Well - what else is there to say? Marta (getting past Stegemann here) and Cristiane (celebrating one of her goals here with a back-flip) put Brazil ahead with a classic collaboration - Marta takes the ball in close, draws one, two, three defenders and then slides the ball to Cristiane who exploits the space with a neat slide past Angerer. Later, Marta decides she needs a run and wants to score one too, so she takes the ball in close, beats the two defenders and with a tricky and risky little move she manages to get the ball just past an outstretched Angerer, using her left foot to do so. Cristiane puts the last nail in the coffin with her own attacking solo, beating four (yes, that's four) defenders before taking on and beating Angerer. Damn.

I'm so happy to see Formiga & As Canarihnas get past Germany (who deserve much recognition for their recent performances - truly an amazing team). And if we see the US go through (they are playing Japan as I write this), there will be lots on the line in that gold medal match, as the US will be looking for its own payback for last year's semi-final World Cup loss, and Brazil, too, for their last Olympics final which they very narrowly lost to the US.