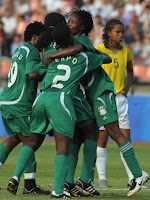 FIFA has a pretty decent summary of the Brazil/Nigeria match in their site, and there is a great blow-by-blow from kickoffnigeria.com, so I'm not going to give the detailed account I gave for the Super Falcon's battle against Germany (see below). Watching today's match (amazing - don't let that 3-1 score fool you, it was an entertaining match start to finish), I found myself mulling over the way the word "profligacy" was used in FIFA's summary of that last game againt Germany:


The African champions dominated much of this match and had enough chances to win a few games, but their profligacy in front of goal - which had already been in evidence in their 1-0 defeat to Korea DPR - once again proved their undoing.


Warning: I am an English Professor by trade. The author meant something like "wasted goal scoring opportunity," a situation that writers about football find themselves needing to write over and over again, and so one's vocabulary stretches along with that striker's foot, and like that prodigal daughter who discards the perfect pass and misses the wide open net, sometimes the writer, too, goes wide of the mark. All that aside, profligacy is an odd word choice. Its first meaning is:


Given the centuries-old racist and sexist traditions that inform representations of African women, it is not a word I would choose. I am sure the FIFA writer didn't mean to draw from this (the primary) meaning of the word. Better to use the word in a statement like "Manchester United's behavior off the pitch is a good example of the profligate lifestyle of contemporary footballers."

Even the secondary meanings for "profligacy" feel not quite right as a description of how the Super Falcons play:


2. a. Reckless extravagance, prodigality; (also) a wasteful or extravagant act. 2. b. Lack of moderation, excess; great abundance, profusion. [Again, this is from the O.E.D.]


On this point, my objection isn't political, but technical. In footballing terms, I would say "profligacy" is more apropos of the striker who strikes too soon, of the player who sends the ball too far down the pitch. (In which case, one might tag Brazil for its profligacy in the first match against Germany in which we saw lots of long balls just thrown away.)

If the Super Falcons suffered against these teams - the very best teams in the very toughest group in this tournament - it was, I think, more properly because they were too conservative. Which is perhaps counterintuitive, because the Super Falcons play with a lot of style and imagination. But style isn't the same thing as wastefulness. If that were true, Argentina and Brazil would have the weakest records in football. And England would have qualified for Euro 2008.

A team of goal scorers and a lame back line may be accused of profligacy, in which case we can turn to Tottenham as a fine example. But the Nigerian women's team plays more like Arsenal, who would never be called "profligate" with the parsimonious Wenger at the helm. We all know the purse strings are kept tight chez les Gunners. And then we have the style of play: lots of jaw dropping short little passes right up to the goal. Spectacular to watch. But, as we all know, eventually the odds go against these genius little moves up the field. Every pass is a pass that can go wrong or be interfered with. Every moment you hold onto the ball is a moment a defender has to catch you. The problem, here, then, is not "letting go" but holding on.

I am wondering if, in the case of the Nigerian women's team, this isn't about confidence, and the opportunities a team has to play together. You didn't see Nigeria, for example, making a whole lot of medium or long passes into space - Germany's Stegemann scored off of exactly that kind of optimism ("I know she's on her way, and will be there by the time the ball gets there"), and Marta and Cristiane work off of exactly this kind of confidence in each other ("Marta - draw those three defenders off me, and then cross me the ball!").

Nigeria's problem isn't profligacy - it's the opposite. A fear of letting the ball go. And with so much riding on them - the only African women's football team at the Olympics (and, therefore, the only all black team on the tournament's rosters), who can blame them. Want to talk about parsimony? Let's talk about FIFA's ambivalent support of African football over history, and then let's talk about FIFA's even more ambivalent support of women's football over history, and, well, marry those two histories et voila! You have the special burden of being the only African women's team allowed to take the world stage. Who can blame them for playing a somewhat skeptical game.

Well, there you have it, my reading of one sentence in a FIFA match report. This is what happens when a feminist English professor becomes a fan of the football.

Before I sign off for the day, let me just say some things about today's game. The Super Falcons have super fans! You could hear them shouting, cheering, and singing alongside their own brass & drums band from the start to the finish of the match. And while plainly Cristiane is player of the match, I'd like to give a shout out to Nigeria's Faith Ikidi who got in some technically perfect tackles and was just a hornet in both of the games I was lucky enough to see. She's one of the defenders of the tournament in my eyes.

Cristiane's bicycle kick goal brought tears to my eyes. So amazing, so perfect - she was surrounded by defenders and still got a controlling touch and just sent it over her own body and into the net. I was rooting for Nigeria, but I'm a fan of the beautiful game, and I don't know what's more gorgeous & inspirational than a goal like that. (Note the Nigerian player who nearly takes Cristiane's foot in her face!)

So - here it is [I leave the broken link up, to signal the depressing withdrawal of images of women playing from the internet - with no mass media circulation, with no money riding on the rebroadcasting of women's games, the Olympics Police censoring of fan-produced highlights services the suppression of the women's game more effectively than it protects a fucking Olympics copyright. Sorry for the language, but it makes me very angry that I can't show you that goal. And you can watch three thousand less interesting goals from the EPL whenever you want.]: