Olympic Women's Soccer: A Day in the Life of the Super Falcons (Nigeria/Germany) 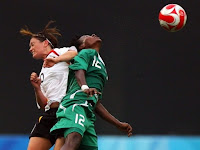 First: Big thanks to Şenol, for recording this game and getting me a copy - no women's football was aired in France today, as far as I can tell!

As I tune in (about 20 minutes into the match), it looks like a normal day in the life of a team playing Germany. Prinz collects the ball at the top of the box, fires a shot with 2 defenders on her, and it goes just over the top. Sigh. Another day at the office.

But, actually, this game is more interesting than that. Germany looks big, strong, and, well, scary. But Nigeria is playing with a lot of energy and creativity: they are just as capable of making havoc. Both teams are really attacking the ball (pictured here, Pingor and Uwak going at it). There is no "watching" the game from the pitch. And they seem to be surprising each other.

Just as I am pouring myself a glass of wine, Nigerian defender Ikidi sends a high lob down the field, it's picked up on the wing and, with a gorgeous flick, the ball slips forward to Super Falcons star Cynthia Uwak (Like a few of her Nigerian teammates, Uwak plays in Sweden, for the Falkopings. She was twice FIFA African woman footballer). Uwak starts on a promising run, and is brought down with a trip, for which Bresonik is given a yellow card. This seems to set the tone for a bit. Nigerian player Ebi gets a card too, just after Garefrekes peels the ball away from her feet. Ebi chases her down, tries to contain her, and trips her up. Laudehr takes Uwak down again a few minutes later. Both teams are working hard to try to prevent the other from playing their game.

It strikes me that in some ways, the Germans seem more unsettled by Uwak than they were against any of the Brazilians. Uwak is really fast on the ball, and has an amazing touch. She is, arguably, the most dangerous player on the pitch in this game (other contenders, Prinz and Nwocha). That said, the Nigerian defenders seem to struggle against Germany's strength and size advantage - there are moments when neither seems to quite know how to play the other.

Anyway, like Uwak, Faith Ikidi also plays for a Swedeish team - Linkopings - and is working her ass off – if the ball makes it down the wing, it’s not on her side of the pitch. She has a nice way of clipping the ball out from players barreling up the field, she has great positioning and a fantastic rapport with those working in her neighborhood. So most of the action looks like the above, but is interrupted by German Smisek getting the ball on the wing, and sending it to the goal, where it is easily picked up by keeper Precious Dede (best name in the Olympics?). Throughout the bit of the first half I saw, Dede looked confident, and was not really challenged.

The first half closes with an exciting give-and-go exchange between Nigeria's Michael and Uwak which ends with Michael surgically threading the ball through three defenders. More bodies start piling in to shut down Uwak who is playing like the ball is velcroed to her feet. Angerer comes out of her goal to remind us why she's the best in the game. 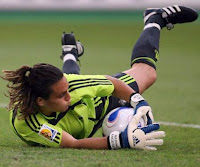 She just throws herself over ball before you know what’s happening. It’s surprising, brilliant. Done with total confidence and even a bit of elegance. Drama!

It occurs to me, as I watch this German television broadcast, that the announcers stop calling the game when Nigeria has the ball. (They go totally silent.) I suspect they don't know the players names? It's annoying.

Anyway, new glass of wine in hand: Germany starts the second half with a bang as a dangerous cross to Prinz is deflected by Jermone's hyper-extended foot just - and I do mean JUST - before Prinz gets there. Germany is looking a bit more together. Overall, as the game gets going again, they have far more shots on target but, then again, Dede sees them coming from a mile away.

At 54 minutes, Micheal & Nwocha make a fantastic attack as Michael takes the ball up past two defenders, and takes her shot - Angerer has come out of the goal and deflects the ball, which is picked up promptly by no. 4, who takes another strong shot on target - Angerer, who has been backing up to her line, makes the dive and another unbelievable save.

She is being challenged more by Nigeria than she was by Brazil. Today, both teams are seeming increasingly frustrated by the absence of a goal.

Next thing you know, Nigeria makes another brilliant - and I mean BRILLIANT attack at about 56 minutes, as their midfield scraps the ball forward where it is picked up by Nkwocha, slipped out to Michael on the wing, give-and-go with Nwocha as the two move on the goal - and Michael takes a shot that goes wide of the goal again. ARGH. By the way, Nkwocha (also twice named African women's player of the year) plays in Sweden as well, for Sunnana.

Nasty bit of confusion Nigeria's back line rattles the team as defenders hold the ball too long and then leave it to Dede to sort it out too late - this suggest the door is opening for Germany - but, amazingly Nigeria recovers and spends the next shift in Germany's half, doing their best to work the odds by taking as many shots as they can. Angerer doesn't seem phased in the least. Laudher seems annoyed, however, as she takes a fistful of Uwak's shirt and yanks her to the ground. Nwocha's header off the free kick goes wide. She never really connected with it. 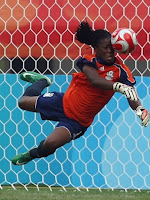 And, well, that's practically the game. It's about 65 minutes, and Germany brings the ball up with clever one-two touch triangles. They bring it all the way down to Nigeria's corner and Mitag (who'd been on the pitch for, like 3 minutes) reaches with her foot to send a gorgeous short cross into space into which materializes Stegemann's foot. Et voila. Chance not wasted. Chance converted into that singular all important point.

Nigeria - and in particular Dede (pictured here) - deserve much credit and admiration for fighting on, and keeping Germany to a single point (Final score: 0-1). Super Falcons: Left Wing sends you her best cross in sympathy! I was rooting for you!

[August 12: On their site, FIFA says of this match that Nigeria had poor finishing - they call it "profligacy in front of the goal". But then they also go on and on about Angerer, and wonder if she's on her way to keeping a clean sheet through yet another international tournament. Well: Which is it? Because Nigeria had plenty of shots on target. And you can't have it both ways! Nigeria gave Angerer a much tougher game than Germany gave Dede - though Dede did have some great saves. Anyway, it's just yet another lame moment in the very thin English language reporting on games not involving the US! Angerer is a brilliant keeper. The best teams, the best strikers in the world have failed to convert their 'chances' in front of her.]