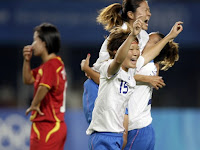 OK: First off - Japan beat China (FIFA summary here). The two are rivals, but I can't say as I saw this one coming. I only caught the second half, and it was good enough to explain why. I felt for China, as I can’t imagine how it must feel to give up a game like that in front of so many adoring fans. At least they were supportive (the atmosphere in the stadium seemed amazing). That said, during the second half they seemed overly cautious – almost depressed, even when they had the ball. Japan, on the other hand, reminded us just how much of the game is about getting to the ball first. They had hustle, hustle, hustle and deserved the win. Sawa got the first goal, and celebrates here. Nagasato got the second, cleaning up some scrap in front of China's goal. They move on to take on the U.S. They lost to the Americans 1-0 but I'm not sure what that says about anybody.

NEXT: I missed the first half of the above game watching a scoreless 45 between Sweden & Germany, who were playing a very physical and defensively amazing game (FIFA summary). [By the way 5 of the players in this match are teammates at Djurdåden Damfotboll in Sweden - Sweden's Victoria Svensson, Sara Thunebro & Linda Forsberg; Germany's Ariane Hingst and Nadine Angerer.] Germany grabbed the lead in extra time, with a perfectly placed corner from Lingor. Garefrekes laddered over the crowd and headed the ball across and into the net with force. Sweden's keeper got the tips of her fingers on it, and almost had the save, but there was just too much power on the ball. Simone Laudehr scores in the second half of extra time from a perfectly placed ball from Prinz. As Sweden put on the pressure, my gal Nadine made another save or two - the game ends, in fact, with Sweden having taken 9 shots on target to Germany's ten. And that's it.

One of my teammates suggests in a comment on this blog that I might give Angerer too much credit in some of my entries. After mulling this possibility over, I thought perhaps I should say that Germany's entire defense has fantastic communication. I don't think I've seen a single slip up between them once. Otherwise, I'd say - no - it's impossible to give her too much credit. She's kept a clean sheet so far, and had a clean sheet through the World Cup. Nobody seems to score against her. She went 540 minutes in the 2007 world cup without conceding a single goal - and that includes a penalty save against Marta! This is, by the way, a record for both men and women. This youtube video is grainy, but it gives you a sense of how good she is. I have to say, while I'm not a Germany fan, I am an Angerer fan. The more I see her in action, the more I feel like I am watching football history unfold.

LAST: How do you beat Brazil? (FIFA summary for their game against Norway). Unless you are Germany and have Nadine Angerer solving all your problems (Marta, Cristiane, Formiga, Daniela, etc.), I don’t know if it can be done. Here is Brazil's strategy: The team is stacked with players that need three defenders on them when they have the ball. Give the ball to one of those women, and let her take it up a bit. Everybody else gets to move around, and because the player with the ball is so awesome, she will actually get it 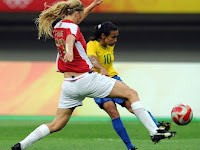 to one of her teammates - say Cristiane - even though she's holding the ball in the middle of a wasps nest. And, since, like, at best the player receiving the pass has maybe one or two defenders on her, and she is better than them, she can score. Brazil has players who can do things like surprise a defender who is running for and with the ball towards the goal, and before she gets control of it, your Amazonian football goddess will make up the five yards between them and slide her body between that running defender and the moving ball and - mid-stride - she sends the ball into the back of the net (the strike is pictured here). That's how Marta got the second goal. She made it look easy, but the look on the Norwegian defender's face (surprise, frustration, awe) said it all.

Brazil is getting better and better. They are proud of their skills, and have every single right to be [I originally wrote "cocky and arrogant" instead of "proud of their skills" - and I meant on the field, when they in their groove - but too many readers mistook my remark, so I changed it for clarity: see comments]. If I had to face these women in a game, I think I’d just, well, I guess I’d foul them hard and often. I think it must be easy to get frustrated and angry playing them. And that's part of their plan.

The only weakness I saw in Brazil’s game today was that they got too relaxed after the second goal. In particular – their forwards, who seemed content to just let the back line do any defensive work, which therefore meant Norway spent more time in Brazil’s territory than they should have in the last fifteen minutes, and Brazil wound up giving them a penalty. But, you know, I didn't mind watching women laughing and having a good time as they were in the game's last leg. Overall, though, for the most part it seemed like Norway was just so sure they were going to lose that they gave up before they set foot on the pitch.

They have their work cut out for them, because they must face Germany again. That's the game of the tournament in my eyes. Pardon the expression, but it should be balls-to-the-walls football, as I am sure Brazil has no intention of letting this game go to penalties.