"Are You Serious?" - notes on Williams's outrage 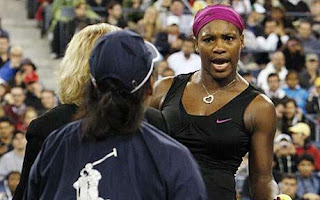 When confronted with the accusation that she'd threatened to kill the line judge, echoing John McEnroe's mantra of complaint, Serena Williams looked at the officials and asked "Are you serious?"

Williams had lost her cool, that much is indisputable. This happens to many of the best athletes when things aren't going as they'd hoped and planned. As she stated herself, her passion got the better of her when it disintegrated into anger. You can see that here as she is walking back to take her serve again, she loses her focus and is pulled out of the game by anger at the quite obviously bad call.

Athletes lose their cool all the time, in a wide range of sports - Zidane's headbutt is perhaps the most famous example of a player losing his temper spectacularly. Of course, that was worlds worse that what Williams did - the two actions are hardly comparable though you would never know it from the media reaction to the tennis player.

Not every athlete has their verbal and affective expression of anger read as life-threatening. No, this accusation - that Williams issued a death threat to the line judge - is the kind of thing reserved for Black and Latino men and women.

In the men's league I help run, a white linesman not used to working in our part of town walked off the field because he felt his life was in danger after a Latino player yelled at him - the center referee, an older Latino guy, was glad to see him go - the guy's racial hysteria had been a problem from the match's start. Our league is mixed, our referees are white, Latino, Armenian and more - they share a commitment to fairness, including an active refusal to allow bias shape how they call a game, and react to players.

Williams could be heard saying to the lineswoman: “I didn’t say I would kill you. Are you serious?”

Yeah, are you serious?

Most Black women can relate to what happened to Serena. We get mad like everyone else. The only difference is that for some reason when white women get angry, they’re not seen as threatening as we are. Maybe it’s the expression on our face. Maybe it’s the seriousness with which we address issues when we are upset. Maybe it’s the tone of our voice. You know that “don’t fuck with me today” tone that can stop a person dead in their tracks and scares the shit out of most white people.

Like comedian Dick Gregory said about Black people’s hair, when we’re 'relaxed', white people are 'relaxed'. You could say the same applies in tennis.

This is an important point. While it doesn't seem unreasonable that an official might take issue with Williams's expressed desire to shove the ball down the line judge's throat, the reaction to it - from the accusation that she'd threatened to kill the line judge to smug media reaction to her "disgraceful" conduct - is quite obviously amplified by racism and sexism, and reminds me of why I'm not such a big fan of tennis (the culture of which can seem as airless and uptight as the country clubs from which it emerged). 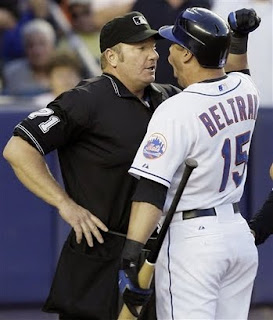 Of course such eruptions happen in tennis, and as many have pointed out, it in fact defined the personas of a range of male players. Other sports have furthermore made an art out of conflict between players, managers, coaches and referees. Baseball has perhaps perfected this - fully integrating this drama into the sport. Bruce Weber explains how umpires are instructed to take the abuse directed at them, and how to tell the difference between the anger that is part of the game, and anger which threatens the authority of the refereeing official. His Fresh Air interview is well worth listening to - there he explains how argument with the umpire works:

An umpire goes against his instincts as a human being. Most people when they get in an argument, they try to win it. But an umpire's job is not to win an argument it's to end the argument....

You have to read your opponent....Wait him out, don't bait, don't try to get the last word in, don't insult him, don't do anything that is going to perpetuate the argument.

When a guy is calling your mother all kinds of names, and questioning your ethnicity and manhood...it's hard to keep your head.

You can use all the profanity you want [when arguing with an umpire], as long as you don't make it personal....the magic word is "you." You can say "That was a horseshit call!" but you can't say "You're horseshit!"

Should you say the latter, the umpire has every right to eject you from the game. Does the world stop when this happens? Or when a yellow or red card is issued for dissent? Of course not.

Few sports cultures expect players to accept outrageously bad calls made at critical junctures. And sports have mechanisms for absorbing that complaint into the practice of the game. Referees in basketball, baseball, American football, and soccer expect anger and hostility at such moments, and have experience and professional guidance on how to keep oneself from being intimidated by such things, while also acknowledging that you can't write conflict, dispute, and anger out of the game.

I'm sure Williams wished she said something else. Like: "That was a fucking horseshit call and you know it." But given the culture within which she must work, I am not convinced that this would have made the slightest difference.

[For more commentary on this, see Troubling Comments from the US Open, as well as recent posts on Black Tennis Pro's and Women Talk Sports.]