Editorial linking the stories of Semenya and Simelane 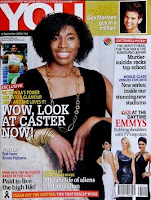 To follow up on posts about Caster Semenya and Eudy Simelane: Mark Gevisser writes a great editorial in South Africa's The Times calling attention to the links between the two stories, "Celebrated and Castigated." Gevisser asks if the conversations about gender sparked by Semenya's visibility had happened a couple years ago, would Simelane have been murdered? His question is rhetorical - but he goes on to sketch some of the intense contradictions that shape discourse on gender, sexuality, colonialism and nationalism. I really recommend reading articles in The Times for South African perspectives on both stories, and how they relate to each other.

As he was writing this, Semenya appeared on the pages of a Sunday magazine femme-d up, The Times covers the debates about this as well in "Caster Gets Made Over."